Looking at similar guns, I think it should be worth around $30 in barter value. I don’t remember seeing any other guns without barter value listed so I guess this is a (very minor) omission / bug. 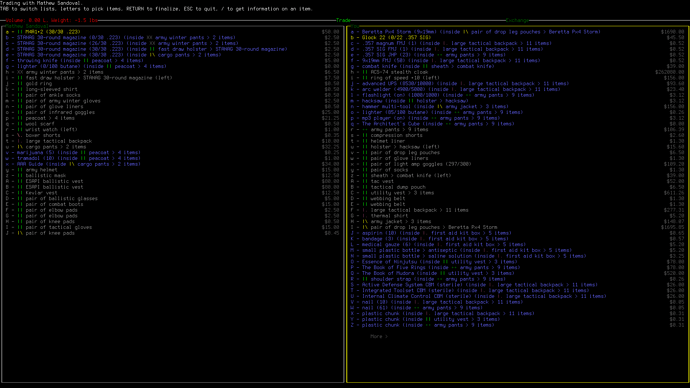 are you sure yours isnt damaged in some way? missing its magazine? etc

Edit: i HEAVILY abused my gun, and went to a trader (as opposed to a follower) and they’ll still take it. 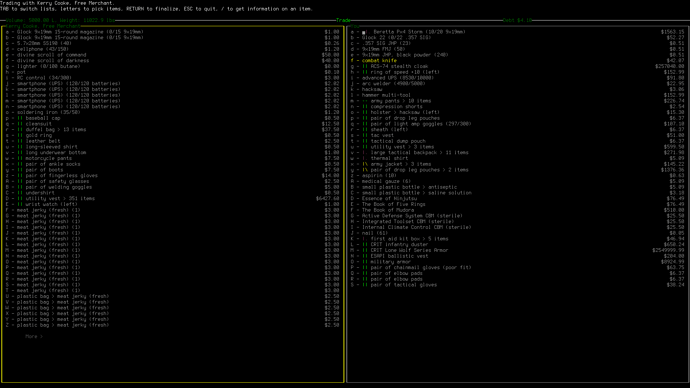 Barter value, not in a shop before the apocalypse price. If you look at in the inventory (by selecting it from the list then hitting ‘enter’) items list two prices. The Beretta only has one.

I suspect the trader is offering so much for it because there is no barter value specified and it’s going by the pre-apocalypse price (which was $650 or so). And then doubling it because you have good social skill and/or faction affinity.

ah. i see what you mean now.

its barter price should be much lower than its actual price, like in the case of the uzi, where the price is 2080, its barter value is only 30, because if you really wanted to you could go and scavenge up a gun.

of note: theres a few items who’s barter value is more than its price pre-war.

I looked into this a little more. The ‘gun’ folder (data\json\items\gun) includes 22 more items with “price” defined than there are with “price_postapoc” defined. That’s honestly probably a bit more than I can tackle but doable if someone feels enthusiastic about it.

heck it, i’ll go through em.
someone else wanna do the pull request for it, cause i dunno how to do that.

That’s very generous of you, but don’t take it for granted that you will be able to get someone to do the pull request. It might be best to find a volunteer before getting into it too much. The Pull Request procedure isn’t that difficult as such, but I find it a bit mind bending. If you can handle following instructions and concentrating on stuff until you get the hang of it you should be able to cope. Unfortunately, that sort of thing sets off my IBS something fierce.

ahem Anyway, I did up an alphabetic list of files in ‘gun’. Everything item there should have a ‘price_postapoc’ (left column). The ones crossed out probably (but not 100% so) don’t need messing with. They have the same count of ‘price’ and ‘price_postapoc’ in the .json file. 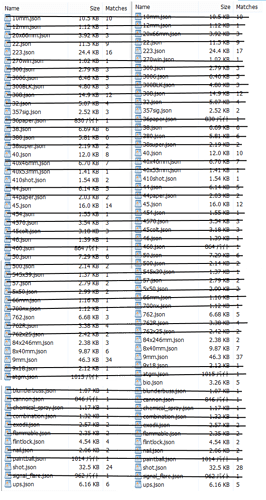 there’s an issue too in that there are some items that have the postapoc value, but no value value, which messes with the count you have as well… like how flintlock has.

edit: also, bio, which all have the tag for merchant avoids anyway, seeing as how they’re attached to you.

That’s why I said “The ones crossed out probably (but not 100% so) don’t need messing with.”

I don’t think ‘price’ is used much - probably only for vending machines and gasoline stations? So if an item has a price_postapoc but not a price I’d just leave it alone.

… but heck if i can figure out how the pull request thing works.

i think i did the thing.