So I just am starting to build a small mobile base to really start exploring the world for the first time and am looking for the basic things everyone should have in a smaller sized, starter “deathmobile”.

The vehicle to build on is as follows (sorry no pictures right now, but its super basic anyway): Built on a basic security van, so heavy frame and armor. I added a V8 gasoline engine, and it came with 2 60L gas tanks and truck alternator. The drivers cab is 3 wide with wall behind it. Back is 3*3 and totally empty. The only thing I am really planning on having is another 60L Tank for water, which I think I can put some sort of electric purifier in to clean it. I also have access to a 40,000 Storage battery and 2 reg solar panels that have yet to be added on.

I would also like to have a place to sleep inside, but I think I can make the cab do that. I also have access to a APC with 3 cameras and a somewhat broken turret. I believe I have the skills and mats. to put those in as well.

Anything else I should go for right away? Kitchen/chem set maybe?

Get a welding rig and EITHER a chem station or a kitchen station, then get the tools for the other, you can use the hotplate from either for cooking/chemical work. You can put curtains on your windows to block line of sight to your cab so you could get rid of the inner wall for more space. You might want to look at getting a recharge station, work bench, FOODCO kitchen buddy and a mini freezer too.
Keep your eyes peeled for Hauling Spaces, I don’t think they are from a mod and they have a massive 1500L cargo volume. Use inboard mirrors, they last longer and don’t widen your vehicle.
Try and get a second camera control system to set up near your crafting area so you can keep an eye on what’s happening around your vehicle while crafting.
If you want to be fancy you can use tiny electric motors on doors and curtains to open and close them from a dashboard, having an extra one of those near your craft area can be nice too.

Oh, and keep an eye out for an airjack, can be very useful if you want/need to switch out wheels/tracks.

Edit: if hauling spaces are from a mod you don’t have (Aftershock) go for cargo carriers, or added the mod to your game

Edit 2: If you DO add Aftershock, they also have the KitchenMaster food buddy and the MetalMaster forge buddy that will take care of most of your needs in regards to cooking/metal work.

Edit 3: Aftershock also lets you convert full sized fridges and freezers for vehicle use too, I highly recommend adding in one of the freezers.

Ah, wasn’t sure either way

My very rough blueprint for a deathmobile that I attempted to make awhile ago and yes I’m aware it’s not labeled >.> I am saddened by past me anyway I “attempted” to do this before the revamp of the time system so instead of the amazing 10 minutes per frame it was an HOUR so it was a slough to do this and I didn’t even get to finish as updating broke the save but I add this in hopes it might help someone 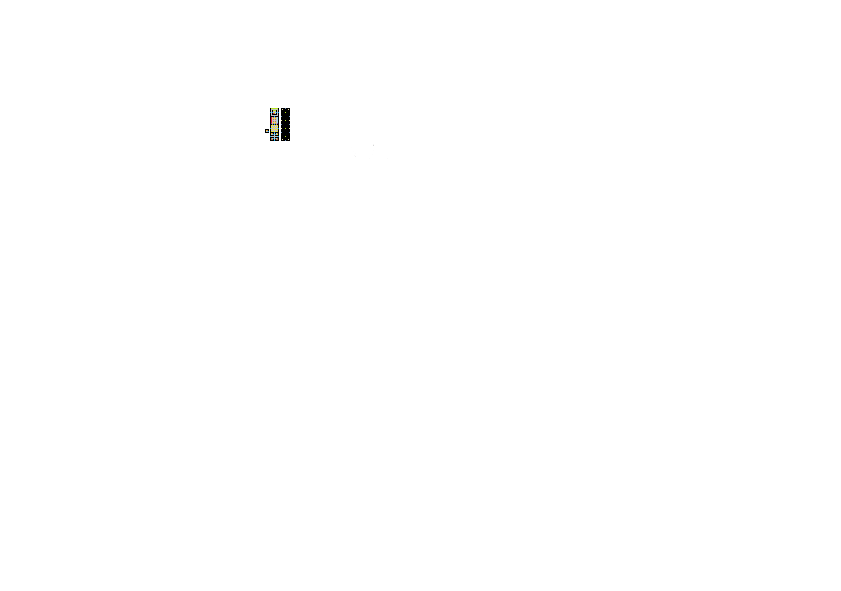 and yes I know its small but doing it by pixel helped alot.

So I can’t build a welding rig yet, need mechanics at 8. Can do the kitchen station and will keep a chemistry kit near by. I am unsure if you mean I should install both when I can, as I should be able to. Recharge station can be put in, as well as the FOODCO kitchen buddy. Should I go with the kitchen buddy instead of the reg. station, or have both? I think I will need to dig around for mini freezer parts.

I do not have Aftershock installed, will have to skip that cool stuff this play through, but thanks for the tips!

The FOODCO is sort of a combination dehydrator/vacumn sealer/water purifier/bullet press, so both if you can fit them.

It’s possible to add mods in after the start of the playthrough if you want btw, the trouble generally starts when you try and remove them. Let me know if you want to and I’ll walk you through it.

@DrakeDragon8 cropped and resized this for you so it’s visible. I still don’t know quite what to make of it. 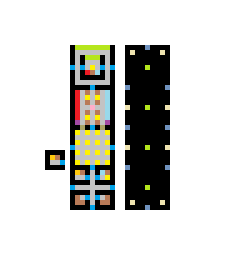 It is very pretty TY! Also not sure what I am looking at but I promise to hang it on my minifridge when I get one. A+ tiger

XD the left is the base whilst the right is the roof.
Yellow is seats, green is windshield, dark blue is doors, light blue is fridges/freezers, red is cooking/metalworking stations, grey is aisles, brown is the hauling spaces, orange is beds (uhh the bottom 9x9 was removed in actual build because i failed to realize that books are needed in crafting so the rop right square of the bottom 9x9 aka reading room is kinda dumb so I moved the bed to lower left of third 9x9 as seen by the square by itself), purple was supposed to be like animal /robot carriers I think? so those were mostly whatever, and the two light brown dots in the centerish besides the door were storage battery arrays, the roof however haseight turrets slots designated by tan dots with blue for security camers with the green dots as floodlights and probably the black as solar/whatever. also the lower end of the vehicle would have boards not quarterpanels so no annoying “Oh look a random creature let me stop you there while you’re crafting”

LOL cool. But yeah that would have been huge. What were you going to us the animal carriers for?

1.) What kind of vehicle do you really want? If you use it just for living, moving through roads and fields (rarely through small sections of cities), you don’t even need hdframes, also makes it easier to make the vehicle amphibious. Armor plating is the most important part. It’s easier to make a new vehicle from scratch than to change frames however.

2.) Your driver’s compartment should be a single space like .|‾|. where . is quarterboard and lines are reinforced glass. This is to prevent you from being shocked/yanked/shot with acid when turning. Relevant if building a true weaponized death mobile. Also helps with lighting the sides of your vehicle at night for your inboard mirrors without lighting up your driver’s seat when turning.

3.) Critical components like the vehicle engine, gas tank, battery etc… should be in the middle of your vehicle in a square with armor plating if you intend to ram through cities. The back of your vehicle will take hits as you will often have to reverse over zombies.

4.) Ideally you’d build a bumper for your vehicle to absorb impacts, with secvan you just have to be aware that you can easily hit the point where you need jacking 17 (steel boom or airjack) to change tires if you go expanding with more hdframes.

5.) You can get extra storage space by replacing the doors with heavy duty hatches.

6.) The only must-have accessory in your vehicle is the welding rig (requires LOS for crafting and be lit up to fix gear) and recharging station, workbench and freezer are nice, rest are completely optional and only if you have the space. Just keep your tools next to your crafting spot space because use actions like reload, unload, activate, eat, read etc… only work within one tile distance, important to keep in mind when deciding where to put what in a larger vehicle.

7.) Remove the backup beeper from secvan and add a muffler. You’ll also want an electronic control unit in your crafting space so you can trigger aisle lights from there instead of having to move to the driver’s cabin. You can add curtains and door motors in your windows to open/close all curtains at once from both controls as well.

This is my current vehicle. 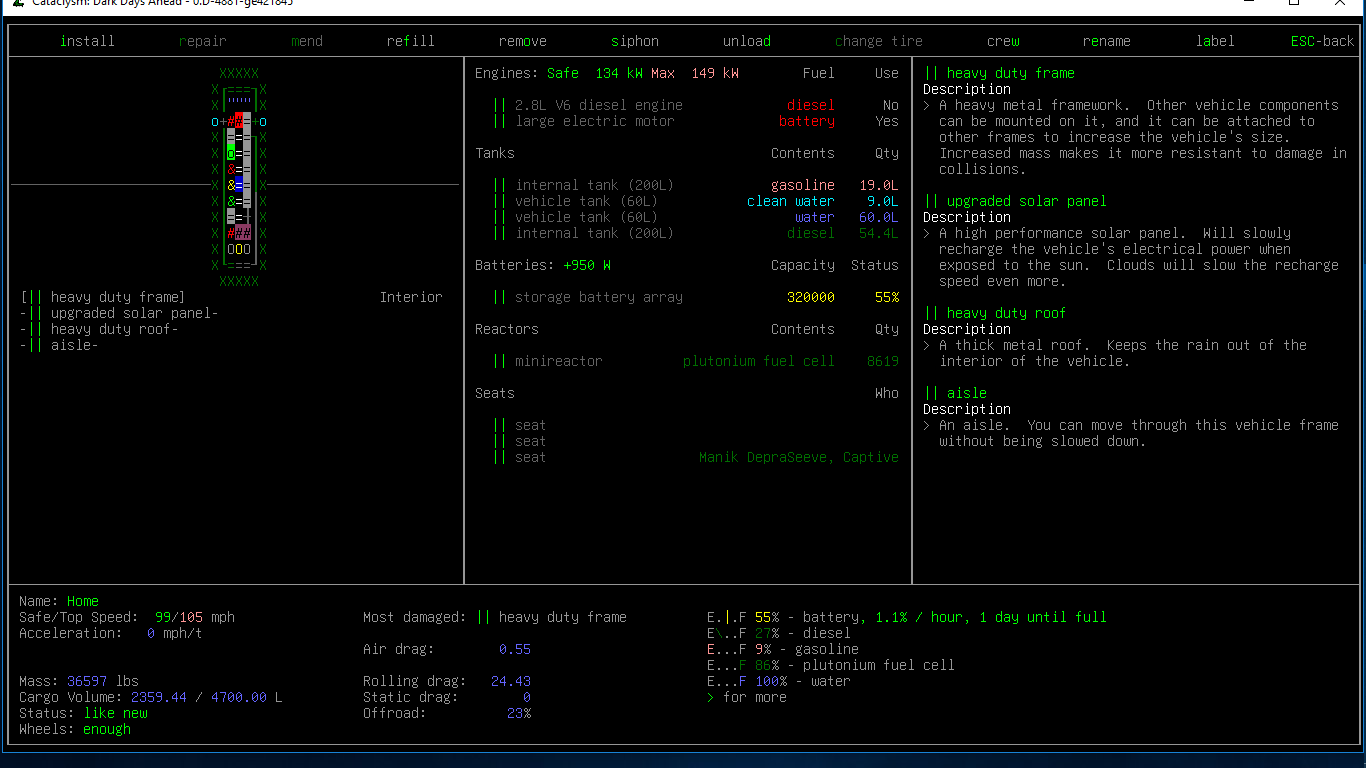 As far as I am aware of the kitchen unit is useless once you have the onboard chemistry lab. You should definitely get the welding rig as soon as possible (one thing you can do until then is to make a makeshift welder and install the battery storage mod so you can install vehicle batteries. Then you can get any car battery with a storage of 2500 installed on it. You can either find a battery that is full or after a bit of riding around with your vehicle and a truck alternator on the engine you will be able to charge up the car battery giving you a decent amount of power to weld with. )

I have 2 200 liter tanks installed using Shards Misc Mod (maybe there are other better mods out there, but I’ve only tried this one and I like it. : https://github.com/Lorith/Shardstuff-CDDA-Mod)
I built this baby from the ground up and I highly suggest you have two engines on it at the same time (hopefully with different fuels gas & diesel or electric) so you can take as much advantage from the fuels you find in cars. Also you should always have two engines because if your vehicle is stationary and next to a shrub, one engine might not be strong enough to push through and get you moving, this is a problem if you are surrounded by zombies and bleeding out/ in too much pain to fight back. I feel like no one uses rams on the side of their vehicle but I really like it for the rp value as well as for the extra defense I get from zombies because even with military plated rams and heavy duty quarter panels, they can and have broken through into the inside of my vehicle.

Also this is my mobile fully self sufficient base, 7 tiles wide, 14 long. I love it, and it has more than enough storage for everything I need (I have two cargo racks found in shards mod giving you 1000 liters of space to store things) My plan is to travel all around the ruins of the earth with it.

Wow must have been a lot of work. I did make mine a bit longer, and trying to maneuver it around is a bit tricky. Not sure how you manage with that but I guess having a mobile palace makes it all worth while.

Not going to go in-depth about vehicle parts seeing as they’ve been covered.
But I’ll mention basic supplies.