A place for an Animal Handling Skill?

Could there be a place for an Animal Handling skill? You can tame, and have pets, but as far as I’m aware they are just friendly animals that hang around you. What if by adding in an Animal skill of sorts, it not only governs tame effectiveness, but also did some other stuff?

For example, Animal Handling could:
-odds of taming an animal (higher skill for bigger animals)
-if tamed ride able animal, i.e. horse, acts as ‘driving skill’ for that mount
-could give a tame/pet certain npc options like guard, patrol, follow, attack conditions, etc.
-like the trait, affects how neutral/hostile animals view you. (odds of fleeing or attacking you)
-could act as first aid skill for animals, allowing you to heal animals
-allows you to pet friendly animals or calm angry ones (like computer skill, not a 100% to succeed, and could end up with chance of getting bit or worse)
-unlock appropriate Animal recipes like pet food, doghouses, saddles, animal calls, etc.

Seek Ultima Online “Tamer”. This was a common skill for owning a dragon as a critter that could bring down bosses and such. Played the hell out of this game for years. Then a few “Free” servers for a few more years

This was a pretty cool thing for a relatively simple game. I imagine it would be awhile away though. Great to have.

I can imagine the critical failures already:

One fun temporary way to implement rideable animals would be to use a saddle on them and temporary turn them into a vehicle, until the saddle is removed (maybe force mount them when the saddle is used, then have the option to mount them or remove saddle on interacting again).

Just use the current vehicle mechanic for horse/moose/cow/mi-go riding. Count them as a single part with “engine”, “wheels” and “fuel source”.

The Rabbit sinks its teeth into your neck.
You are bleeding.

This is eventually going to be the solution, but it requires some code support that I haven’t written yet because I’ve been busy accidentally causing the game to crash when you interact with vehicles with no fuel on other stuff.

How would making the animal a vehicle as a opposed to writing it as a separate system? I can already see how this would be problematic for future tense in regards to animal breeding and keeping the creatures alive.

I think it’s more likely a case of reusing bits of the vehicle code than literally just slapping the word “horse” on a motorcycle, and “hooves” in place of “tires.”

There would definitely be a lot of commonalities in the code to handle an animal as a means of transportation, so reusing the code would be good. You’d want to build a new class for it, though. Motorcycles can’t graze the landscape for free fuel, but they also don’t spook at the scent of blood and run away with with you in tow.

I assume the creature size in the json would dictate whether you can or can’t ride something. Unless we feel like making like a few games Ive played where you can literally ride rabbits.
You could possibly have a ‘wildness’ value for each tameable creature that decides how difficult it is…
I suddenly just had a idea about riding a zombie hulk. I doubt that would be added, but if it was, I think I’d be in love.
Unlike vehicles, even if you are trash at ‘driving,’ animals probably aren’t going to be stupid enough to ram into a wall. Probably. Unless you find something that is blind.
Riding something would presumably make you more intimidating to NPCs and such. I’d certainly be scared if I saw some dude in full survivor gear riding a freaking bear.
Somewhat along with that idea, perhaps you could find NPCs either riding animals or having them as followers in a way.
You could have it so that let’s could be uselessly distracting in a way to make it so lots of people end up taking care of their animals half the time instead of themselves. “Go fetch the stick! Good, um, eldritch creature!”
You could name your pets as well. I’d totally naans my pig Bacon.
Non-psychopaths will get a mood debuff for having an animal die.
Existing traits relative to animals will effect this skill.
Animals have a sort of ‘trust’ level which effects what they will do for you.
Tamed animals will be able to gain some basic skills and do special actions depending on what they are:
-Some can dig
-You can train Mi-Gos like parrots.
-You can train parrots like parrots
-Some can help with ‘fetching’ things for you
-And so on
Some will naturally be more cowardly than others (A dog will more likely lay down its life for you than a gerbil)
Add more animals for training such as gerbils
Add zoos and such where you can find lots of special animals to train (I don’t think lions are common around New England)
Add animal specific meds and such
Add CBMs for animals so that you can ride a CyberBear.

Please add this. I am in love with this idea. There is so many things you can do with this!

You would be a great writer for Dead Pool

Which person are you talking to? Me?

Mi-go are not animals, they are sentient. And very evil. They have their own axe-murdering parody of a technological civilization. They are like a lovecraftian version of the Dark Eldar from Warhammer 40k.

I was kinda joking, I figured that most people would realize that, but I guess it’s not surprising that many wouldn’t. I didn’t know that Mi-Gos were supposed to be smart like that, but I didn’t actually think you could train them to act like parrots.
Now, if we were to add some sort of way to give them mind control chips…

No you should be allowed to ride them, and those who foolishly do will promptly get Mi-Go-ed to death.

To be fair, under the current implementation mi-go’s are not functionally different from an angry bear or a moose in any significant way.

What about using a saddle on them(have a saddle then “e” them) turned them into an automatically equipped item that boosts your speed(and severly lowers it on furniture? Unequipping them will give you a saddle and set the animal free.

So… I don’t know how y’all feel about necroposting around here, but this is something I’m pretty interested in and I’m just gonna right jump in on it.

I’d like to see NPC animals playing a prominent role at some point in the future. Guard dogs, saddle horses, pack mules, draft oxen… heck, let’s even train falcons to claw out zombie eyes for us. Y’all can even have your bear and moose cavalry if you want… though I’d rather play no part in such folderol.

How would making the animal a vehicle as a opposed to writing it as a separate system? I can already see how this would be problematic for future tense in regards to animal breeding and keeping the creatures alive.

Male work animals are usually gelded. Beyond that, you would only want them saddled/harnessed when you’re actually working them, so they’d still be spending most of their time as normal animals. How you’d code for that, I don’t know.

There would definitely be a lot of commonalities in the code to handle an animal as a means of transportation, so reusing the code would be good. You’d want to build a new class for it, though. Motorcycles can’t graze the landscape for free fuel, but they also don’t spook at the scent of blood and run away with with you in tow.

*Motorcycles can be driven full speed for hours on end for as long as you have enough gas and physical endurance to keep them running. It doesn’t have to be carefully alternated between walking and loping to keep from being run into the ground and killed from exhaustion (or, if a mule, from throwing you off and stomping your skull in).

On the other hand, motorcycles don’t give you much in the way of cargo space or towing capacity. You can’t hitch a team of them to a wagon or string a big train of them along behind you for long-distance treks into what’ll very quickly turn into an almost-primeval wilderness.

*You don’t have to shoot your motorcycle after it steps into a groundhog hole.

On the other hand, you can’t eat it after wrapping it around a tree.

*You can keep a motorcycle on your land and you don’t have to devote half your fieldspace to feeding it.

On the other hand, you can’t use it to plow your fields.

*Motorcycles can be maintained (short-term, at least) without rebuilding a supporting industry pretty-much from the ground up.

On the other hand, the industry they do rely on ain’t as conducive to the cottage system that’ll likely emerge in a post-apocalyptic setting. Think Howard Kuntsler’s World Made By Hand here.

(sidenote: do y’all think the Amish survived the apocalypse? I can think of some ways that they might have, and there is a rather prosperous OOA community in Maine.)

These are just a few differences that I can think of; there are plenty of others. I guess it’s okay to imagine a horse as a slow motorcycle for the short term, but even I can see that doing it in a realistic manner is going to be a challenge in terms of all the coding.

Personally I’d love to ride a Tamed Massive Moose Mount into battle. One that has mutated to be an unstoppable moose of pure unbridled fury.

Said mutations/traits would be as follows:

What am I missing? OH! Yeah…

Basically I want to ability to tame and mutate my pets/mounts. Maybe equip them with armor and turrets… =3

Ride in style ladies and gentlemen.

You’d probably have to do something like that to make anyone want to use moose as a war mount.

The Russians experimented with moose cavalry, once in the Great Northern War and again just before World War II. It didn’t really work, since moose are even more skittish than horses, they’re slower, more disease-prone, eat more, require some level of specialized training, and if they’re anything like farm-raised deer then males that weren’t gelded are near-uncontrollable in the rutting season.

Reindeer, on the other hand, have a very long and successful history of use as wartime draft animals. In some of the coldest parts of the world, they still are. 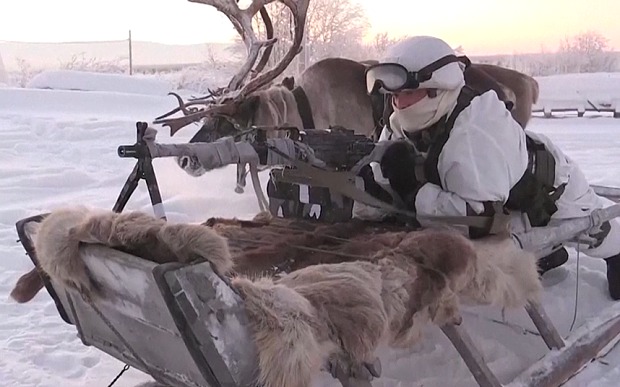