I’ve noticed a 0% success rate earlier on with this character with an item that shouldn’t have been THAT hard to repair (army winter jacket), but I chalked it up to the item already being damaged. However, I’m starting to think there’s something funny with the way these rates are calculated, or maybe I just don’t understand the current system. 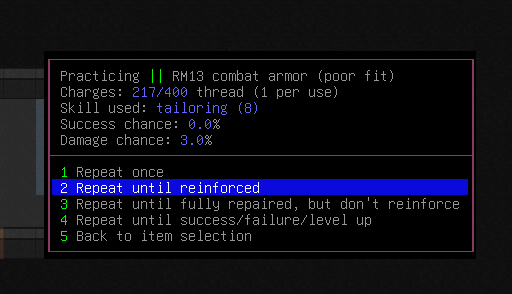 I have tried to refit this suit of rm13 combat armor with both a tailoring kit & extended toolset (no more seg faults, yay!), but no luck with either tailoring (8) or mechanics (8). To make matters worse, I don’t even get any exp for repairing damage caused by attempts. I’d be willing to grind these skills up if I thought it would change the outcome, but previous experiences with repairs lead me to believe this is a waste of time. Is there something else behind the scenes when it comes to repair success rate? Am I getting screwed by a lack of proficiency?

I thought I understood how repairing works but it just isn’t intuitive. Some items are explicitly labelled as “can’t be repaired”, while others are effectively impossible, for no obvious reason. At this point I’m tempted to try and dig up the formula to I figure out if I have any chance of fixing/refitting an item at all, since this information isn’t available in-game. Am I missing something? 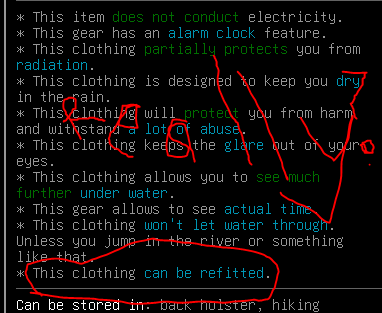 This last part is just a comment on the idiosyncrasies of this system in general, outside of my particular issue (as this is hardly my first 0%) :

Not to turn this into a rant, but I don’t understand why repairing/reinforcing is arbitrarily gated like this when other tasks (lockpicking, hacking, surgery, etc) all have a minimum success rate afaik. Moreover, many of those tasks afford some amount of xp. Several of those tasks can also be augmented with the right tool/cbm/drug/nursebot. On top of that, repair/refit costs additional resources (thread/power) and the specific material used by item, so it’s not like there isn’t enough of a constraint on it already, especially when it’s compared to every other task in the game. Even with a flat 0.5% minimum success rate you would still have to put a lot extra effort into repairs.

The RM13 combat armor requires you to have either level 10 tailoring or level 10 mechanics to repair it (both achievable in game), I do think the army winter pants are too difficult to repair, I’ll open a pr in the hopes of changing it’s difficulty.

Oh okay, good to know. Is there any way to figure out how much skill you need to work on a particular item? Without an increasing (if marginal) success rate gradient, it’s hard to know whether 2 or three additional levels will actually make any difference. Seeing 0%, even after gaining a few levels, probably leads players to assume they’re doing something wrong (at least it did for me). It also seems strange that working on high difficulty items yields no xp, given that materials are being consumed regardless.

In game? Not really.
The skill needed for a particular item is 10 if it has no recipe or no item that it repairs_like defined in it’s definition.
Otherwise, it just uses the skill requirement used for the recipe (or the item it repairs like).

Ah, thank you! That’s exactly the kind of info I was searching for in the first place. I had a hard time finding it. I still think a 0% success rate and no xp awarded is an awkward design decision, but it’s a relief to know that behind the scenes it’s fairly straightfoward. Would it make sense to include this info on the wiki or something?

It would definitely make sense to include it on the wiki. It also shouldn’t be too hard to show the expected skill in the repair menu there.