"You can feel the blood in your medication stream".....What?

So I’m in the process of genetically engineering myself. Just hit prime threshold, no truly terrible side effects, just weakening and fast metabolism, and got Prime Strength. I decided to roll the dice and take a hit of medical serum. My luck was good, I got Pain Resistant, and nothing else…except a weird message:
“You can feel the blood in your medication stream. It’s a strange feeling”.

I checked the status menu, no negative modifiers or anything, like if I was addicted to something. Can anyone tell me why the hell my guy feels like he has more drugs in his veins than blood?

I think that’s the message you get when the game tries to give you a mutation you don’t have the threshold for. It’s kind of a hint towards where you’re leaning. That one sounds like Medical tree.

Saying aloud, sounds backwards. I think it should be the medication in your blood stream. Maybe an indication of almost but no cigar?

Looking in the code it SEEMS to just be a flavour message for medical mutagen serum. Doesn’t seem to mean much, but only serums can cross thresholds, so maybe it’s supposed to represent you being on the edge of the threshold. Maybe. I dunno.

Well, I already crossed the prime threshold, so I can’t go into the medical one can I?

Nope! You can only have one threshold, and I’m preeeeetty sure you can’t get rid of one, so you’re stuck with it forever.

Thats fine, I wanted prime. I’m going with a cybernetic captain america theme anyway. You can get rid of the threshold mutations like Prime Strength with purifier though right? I was planning to play with the medical tree until I get a bunch of good lesser mutations, and hopefully purifying away any bad ones, and then reusing alpha serum until I get my prime mutations back if I happen to lose it.

I don’t know. Some mutations are unpurifiable, and I THINK some/most/all post-threshold ones are. Dunno for sure, but the wiki says.

I know “Prime” itself won’t go away, as that is the threshold mutation. I’m hoping the post threshold ones won’t, and I can then just purify away everything else.

My ideal plan would be to play mad geneticist until I’m left with Homo Superior. Get rid of weakening and rapid metabolism using purifier serum, leaving behind Prime Str, Dex, Int, Per. Then use medical serum and purifier serum until I have only the positive pre-threshold traits from that mutation path that I want as well.

If I can get enough ingredients and once I have some NPC’s who trust me, I’ll try it on them as well. Make some superhuman minions.

I’m having dreams now too. I presume the one about the “peaceful world” is a dream due to the Prime mutations? It seems consistent with the description of the Prime Mutation: “You’re the perfect candidate to tidy this mess”.

I’m more concerned about the other one, about “Faults” in the world that need to be remedied. That also kinda sounds Prime-ey, but I’m not sure. Any psychic stuff implemented yet? 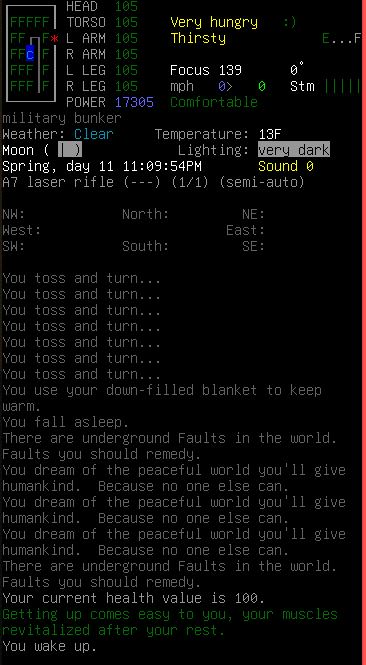 The Fault; I don’t remember what it could be, it could be those giant rivers of magma (Rifts) with their respect “Hellmouths”, or the end of some mines.

Correct, the faults dream is Alpha. It has multiple for flavor I suppose.

PSA for anyone that comes across something weird like this, the quickest way I’ve found to get an answer on new things to to go to https://github.com/CleverRaven/Cataclysm-DDA and use the searchbar in the top left. If you put in something like “faults in the world” then it will show you what you’re looking for in no time. Most of the code is transparent enough that you don’t need to be a programmer to understand what’s going on.

Thanks, I’ll have to check it out.

It would be cool if there were dreams that actually led you somewhere, or started a mission. Like you had a premonition or something. Each mutation type would have a different set of “dream missions”.

For example, that Fault dream might start a mission to find a dimensional rift and close it, marking the nearest existing one on your map. Accomplishing the mission would give a morale boost or something.

Mmmm that’s a good idea, I like that. You should post it in the needful things thread (the new one).

Recently, you have begun to find yourself unfulfilled and distant in your daily occupation. Strange dreams of prospecting, stealing, crusading, and combat have haunted you in your sleep for many months, but you aren’t sure of the reason. You wonder whether you have in fact been having those dreams all your life, and somehow managed to forget about them until now. Some nights you awaken suddenly and cry out, terrified at the vivid recollection of the strange and powerful creatures that seem to be lurking behind every corner of the dungeon in your dream. Could these details haunting your dreams be real? As each night passes, you feel the desire to enter the mysterious caverns near the ruins grow stronger.