What are the options you usually use in world-gen?

For me, its usually fast-zombies, static spawn, no wander spawn, 5.0 enemy spawn rate, and 2.5 item spawn rate. Season length is usually 21 or 30, city size 6, and I never play with NPCs enabled, ever. I like to think my survivor is the last man on earth.

Static and wander spawns enabled. Both static and dynamic NPCS enabled. 2.0 enemy spawn rate, City Size 7, season length 91 days. Everything else default. Normally no mods enabled, but for my current world I’m experimenting with boats and the vehicle part expansion.

static spawn only, 2.0 spawn rate, 1,5 item spawn rate (it still seems as if there are not enough items to be realistic), static NPC’s, city size 5, season length 91, No Joke Monsters mod.

Static spawn, and thanks to experimentals wander spawns as well. Spawn rate 3-5x, item spawn 1, NPC spawn .7. City size 6, season length 45. Spawn rate used to be 15-20, but since zombies evolve now I lowered it to 3 or 5 and have hordes on as well. NPCs are both static and wandering.

Static Spawn = True
Wandering Spawns = False (Used to be True, and will go back to True if I see some improvement here in how hordes are handled)
Surrounded Start = True

Also, I forgot, that I play with mutate via radiation off since I find it actually makes the game easier when it comes to radiation. I want radiation to have a good chance to kill me if I don’t deal with it correctly instead of randomly mutating.

The lower monster halflife the faster they change. Be careful. 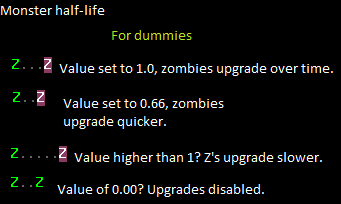 Not up to scale.

Yea, I remember when I saw the option before it was renamed to “monster halflife” it used to be called mutation rate. I actually like that idea because it means cities and buildings that I don’t clear earlier on will be even more difficult to clear later on.

Most of these were changed after generation, so I haven’t seen any static npcs or zombie hordes yet. But I am greatly enjoying 50.00 spawns on a late-game character.
(Have a lower level of spawns to start, otherwise you might just instantly die in the evac shelter.)

I feel pretty bland for liking the following settings, but they feel right to me.

Size of Cities: 3 or 4 (Does changing this after worldgen do anything at all?)
Spawn rate: 1.3
Item spawn: 1.2
NPC Spawn: 0.5
Monster difficulty: 0.20
Initial time: 21 (Starts at the beginning of a long, dark, horrible night. Besides opening up a lot more starting locations, it also feels more thematic to me.)
Initial season: Spring (Vaguely considering changing to Summer because it would make gear collection make more sense from a balance POV. Maybe with the hordes or NPC revamp…)
Season length: 91
Construction Scaling: 0

Graphics:
All animations on and default
Terminal width 196
Terminal height 51
Tiles: MShockModded32 (Thank you so much to whoever maintains this…)