Vehicle Mounted Turrets- Is there a point?

None of the vehicle turrets I’ve seen (with the exception of the the Laser Rifle and the Tesla Cannon) have ever seemed worth using to me. When you fire them, they fire all over the damn place instead of where you aim them, which defeats the point of aiming in the first place (and I don’t think I’ve seen one that fires Burst or Semi-Auto). Its easier for me to just get out of my Deathmobile and rip apart the zombies on my own; they pose little threat to me, and I can train my skills this way. In fact, my current character is almost at a point where they’d be better of firing an M60 on their own instead of mounting it on a vehicle.

Am I doing something wrong? Or are Vehicle Mounted Turrets just bad?

Some of the bigger explosive weapons can be good in emergencies. I’ve taken out a zombie hulk and a chicken walker with the Mk 19 grenade launcher on mine (though unexpectedly, the hulk took about six times as many grenades to bring down as the armored fighting robot). I would have been hard pressed to do that on foot.

But yeah, I wouldn’t bother with mounted machine guns right now. Electric weapons like laser cannons can still very useful though, and I’ve had great success with cart-mounted ballistae and the like.

I now imagine a guy dragging a travois filled with junk with a ballista attached.

You correctly imagine one of my previous characters

30 posts were split to a new topic: Firearm accuracy

I dunno about that. Handguns and SMGs are alright within about shocker shock-cloud distance, but rifles are hot trash. Actually hitting at long range is damn near impossible, even when “long range” means “across the room,” forget about “down the street,” and the aim time on them means they’re absolutely terribad. The chances of hitting are low, the time to use is high, and the damage output is not good enough to justify either of those drawbacks.

This is with Rifles 7 and Marksmanship 5, mind you, so not exactly inexperienced, either.

I think they’d be more useful if you could take a knee/drop prone, and actually fire at fairly significant range, but they’d still need a massive damage buff to be worthwhile.

I take a rifle with me to grind Marksmanship; I actually use a Glock and American 180 to kill things. That is the opposite; mind you, the exact opposite of conventional firearms wisdom, which is that the handgun’s purpose is to fight your way back to the rifle you shouldn’t have let go of in the first place.

Also, the mods are often so ineffectual as to be actually worse than useless, given that they increase the weapon’s weight and with it, aim time, whilst bringing little or actually nothing to the table.

Now, about vehicular turrets, he’s entirely right. Frankly, vehicular turrets are very poorly implemented.
For one thing, a mounted weapon suffers recoil - any well-designed weapon mount should with absolute firmness mount the weapon to the chassis, thus placing so damn much mass and hard material reinforcing the weapon that unless it’s a big enough gun to make the entire vehicle jump, the recoil will have no effect.

Thus, bullets go all over the place, and automated turrets simply go full auto and do not stop firing until they kill the target; thus, an M2 Browning in an auto-turret is very capable of emptying nearly a full 100-round belt trying to kill a basic zed, having much more the effect of a Cone of Bullets spell cast by a demented d20 Modern Wizard rather than an M2 Browning machine gun engaging a turret.

bullets go all over the place

I’ve noticed vehicle turrets doing this too.
There was a bug filed about ranged weapons a year back, where missed shots would veer off wildly. (#18889) It was fixed, but I wonder if perhaps vehicle turrets have something similar happening?

No matter how low sight dispersion gets, muzzle dispersion remains floored at 45. Which is… Not fine for handguns, but it’s tolerable over handgun ranges, but it’s absolutely awful for rifles, which are ostensibly long-range weapons.

Combine the dispersion floor of 45 with the fact that being vehicular-mounted seems to make no difference for recoil, and you have HMG turrets that empty half a belt trying to kill a zombie at close range. I’ve seen a Browning M2 spray half a street before it killed an ordinary zombie at the distance of literally a carlength from the barrel.

That should not happen. The most drunken machine gunner ever should have better accuracy than that with a mounted M2 at a distance of 20 feet. He’d be unconscious before he’d aim so poorly.

You should be able to just tear some binoculars in half and duct tape one part to the top of your rifle, problem solved (Is this even a viable IRL?)

Going back to mounted turrets, as far as I can recall you can’t actually steady your aim. I assume this is because they are mounted and as such are easy to direct, but one still needs to aim at a target before firing. I can imagine my character just pointing a mounted m60 in the general direction of a zombie and just letting loose on the trigger, using hope to kill their adversary rather than their extensive training in marksmanship.

Yeah, there is an arguable “realism” problem with medium-long range aiming math works.
While the sight range/reality bubble issue has already nerfed gun ranges considerably, there is the practical fact that in most circumstances it is extremely hard to hit things with supposedly long ranged guns anywhere near even their nerfed range. Dispersion floor could be the culprit.

OTOH i have no complaints on how effective guns that are supposed to be used at short range are. An MP5 with 5 in smg/marksmanship and few basic mods fire can fire off ~2 decently aimed snapshots per turn and puts down most zombies in 1-3 shots.

Also vehicle mounted 50’s blast hulks dead right away at ranges where the chances to hit are decent. Which currently is annoyingly short ranges.

On the topic of scopes, are not enough scope types and they are too rare, come on, scopes are common hunting/sporting mod.

Not all targets are worth the bullets.

Also don’t recoil penalties stack during the burst, getting crazy for later shots?

Yes; hence people complaining about Mounted M2s spraying bullets everywhere except at the zed they’re engaging, and frequently taking 3/4ths of a belt to kill a zombie at handgun range. Which is not how a mounted MG works: M2 HMMWV turret firing - YouTube

The recoil is very well controlled by the mechanical mount, and the gunner is more than capable of firing short, controlled bursts.

I can agree that guns are inaccurate, only guns what i find usefull are handguns and shotguns at close range

but there are good weapons even at long range, a laser rifle for people with bionic ups and a lot of power are basicaly accurate recoilless machineguns

You should be able to just tear some binoculars in half and duct tape one part to the top of your rifle, problem solved (Is this even a viable IRL?)

No. There’s no way to sight-in a binocular scope if it’s just duct-taped to the rifle, you need to be able to adjust it in very fine increments. It would be next to useless, better to just use the iron sights if that’s the only other option. 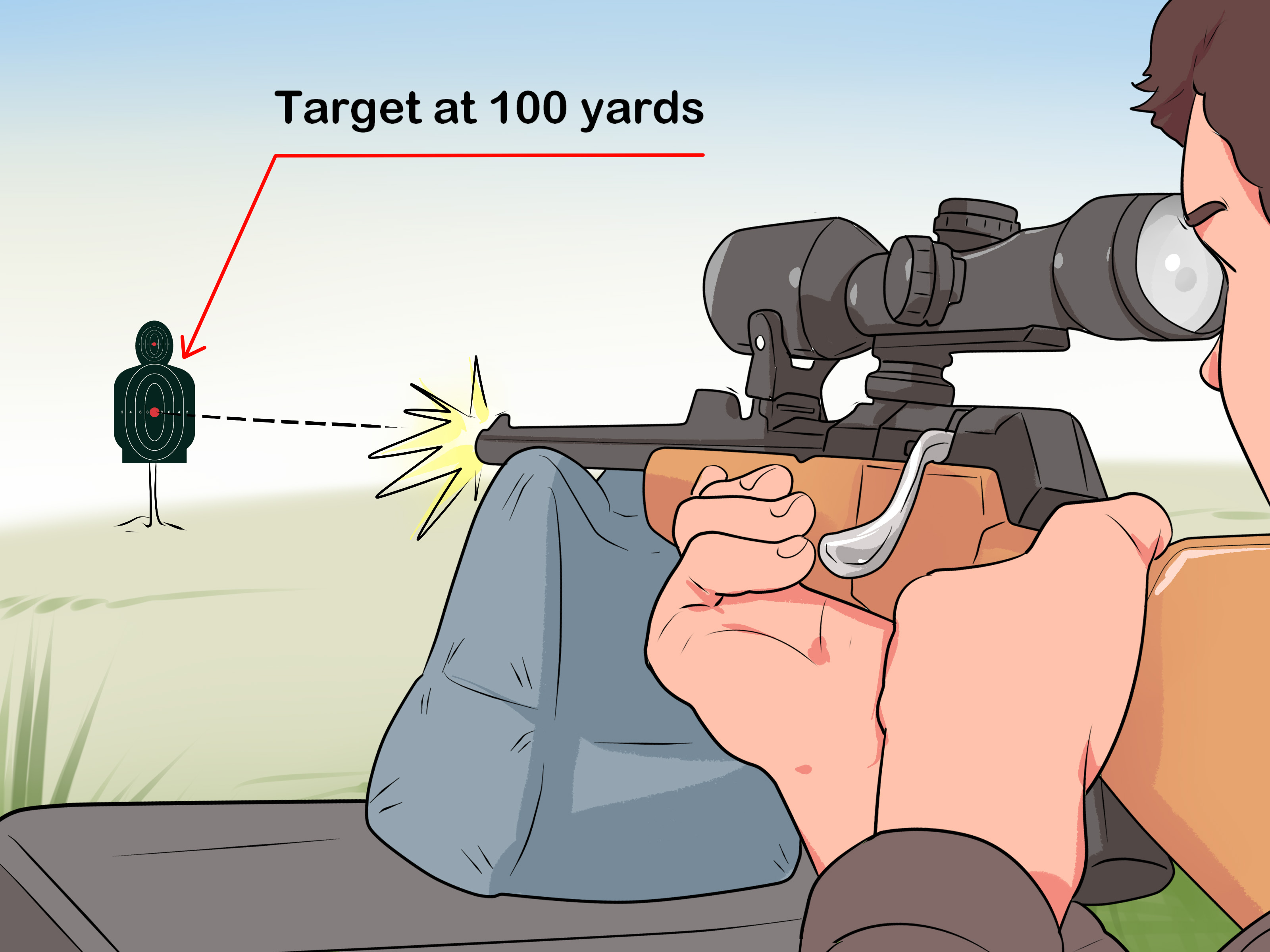 How to Sight In a Rifle

Experienced hunters know that sighting-in a rifle is imperative to hitting a target. Rifles need to be sighted-in every time they are used, since sudden movements or jolts during transport or storage can knock the rifle out of alignment. A...