This forum is just a more boated awful version of Reddit. I think honestly people have stopped even bothering here as you can pretty much get the same experience of a moving discussion there, and have the added benefit of being able to discuss on multiple games/ topics.

Worst part is I can’t even downvote your awful post…

I know right! Too bad you cant take criticism since this is forum feedback.

Wonder if we have any statistics on user signup and post rate on SMF to compare. Do feel like things have slowed down since the move to Discourse

Wonder if we have any statistics on user signup and post rate on SMF to compare.

Summary
Traffic levels are very similar to the level they were at before the migration. About 20%-25% down, but steadily increasing again. The subreddit is definitely picking up a good bit, but it’s way lower traffic than the discourse (I don’t have data, I just read both and that’s my impression), the quality of discussion is IMO much lower, and it’s reddit, gross.
I agree the site feels slower, that might partially be layout, it might be a valid and subjective evaluation of the kind of posts (I know I don’t make as many of my ridiculously huge planning posts as I used to, I blame my toddler), and it might just be faulty memory (remember the good old days?), and yes, some of it does seem to be less posting, but about 20% less, not something crazy. I’d love to hear any suggestions you have to improve the situation.

Analysis
There are only a few fields we can compare directly:
Topics: Is roughly comparable, maybe down a little. It was always between 0 and a handful of topics a day, averaging ~100 a month. Comparing September and the last 30 days, it’s down from 130 to 101, but looking at month-over-month on smf, that’s within normal variance. Compared to last March at 81 topics, activity is up.
Posts: ~50 a day, typically a bit over a thousand posts a month, this is very similar. Comparing September on smf to the last 30 days on discourse, it’s down from 2,145 to 1,300, but again, previous months in 2017 had lower traffic on smf. Compared to last March at 1,404 posts, it’s extremely close.

A bunch of the stats look like they’ve dropped, but aren’t actually comparable for one simple reason, the smf site was absolutely FLOODED with bots. Do you believe there were 1,353 legit new users in September? I sure as hell don’t. Were there nearly 2 MILLION legit page views in September? Hah.
The new user count, page views and most online stats were completely dominated by bots. As of yesterday, on a completely idle, shut-down site, there were 54 unique visitors and 27,000 page views. That’s either people reading archived topics on a dead forum (I REALLY doubt it), or it’s bots trying to pretend they’re real users so they don’t get banned.

Digging further into the past, there’s the rest of 2017 before September:

That is a fair assessment and surprising actually Kevin. I think its just my want to organize things that makes me wig out on this type of forum so most of my issue with it is just layout. Honestly I don’t think Reddit is better because its not, and suffers from the same problem. If your interested in a topic its a bit hard to follow since it gets buried under updates in posts that I don’t care about. I do know that some users don’t use JS enabled so that could be an issue as this site pretty much wont work. I cant say for the validity of disabling JS as a “real” security measure or not but I thought I would mention it.

Also its very possible that its me so used to the “good old days” of how forums were layed out in the past. To be really fair I don’t think the the forum layout is bad per say but I cant say its very good, esp when viewing on a desktop.

My Two Cents:
I think the biggest difference is that there are barely any newbs on the Discourse. Reddit gets a lot of traffic which is just “Where can I find this item?” and “This isn’t working, fix it.” or “Wow look! I killed a moose with a banana!”. Not to say that Discourse doesn’t get that, but Reddit gets far more, while the Discourse gets a lot more actually serious discussion.

I honestly like the new system, it’s very fluid, works excellently on mobile, not bloated, themes are great.

my only complaint is navigation to specific topics feels a bit clunky and should look a little more straightforward to newcomers.

I enjoy this forum, I mean no it’s not perfect, but either is Reddit. I dunno what I would do to improve this place though, as it seems fine to me. I would like to hear suggestions on what people would like improved, just for curiosities sake.
I actually used to browse the Reddit Sub much more than SMF, but have started to browse here more than Reddit. Just my 2cents FWIW.

i still harbor quite a bunch of nostalgia towards the smf forums, but still, this is pretty nice. Quite better on mobiles, as someone said!

also, we really need to fix the link towards the old forum in http://en.cataclysmdda.com/
and that page in general, as it’s the reason people still play the stable, two year old build, hehe

I have only one thing to add to this conversation, and to the topic of the new forum in general. 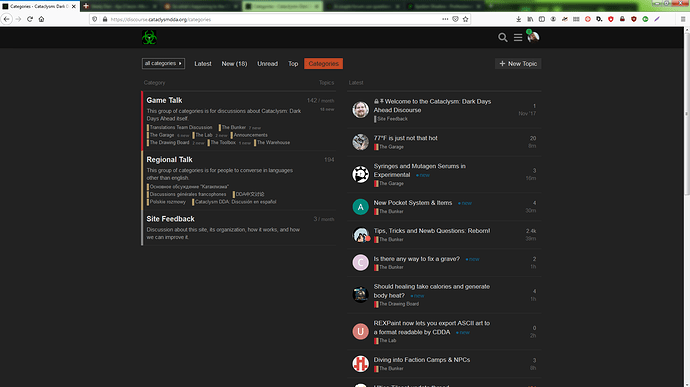 This is absolutely atrocious. Discourse is difficult to navigate and a pain to use in general from a pc. It’s so mobile-centric that it’s nigh-on unusable. It’s tiring to use and getting a birds-eye view of the topics and current conversations is almost impossible. I cannot for the life of me see why anyone would think this is in any way better than the old-style forums. I mean for crying out loud, every post takes up between a fifth- and a third of the screen, which means you have to scroll endlessly to follow a conversation.

Apparently this has been in use for two years now? I’m an on-and-off player and constant lurker, so I know my opinion is pretty much worthless but…

At the top, select latest instead of categories. Then you’ll see the whole page layout.

Huh, I never even knew about the categories view. I’ve always quite liked the very straightforward look of this site, it works great on my phone

I only use categories when i’m looking to narrow a search down by where I know something is, or am looking to have a specific kind of discussion. The second one less now days, that the forum games section is gone.