Might be a silly addition, but telekinetic monkeys you can hear. Would provide at least one more traditional “animal” to labs, and would just generally be a nuisance. Maybe not very damaging, but if it uses a non-defendable armor-type it could round out battle armors and stuff to have labs still be a bother.

Yes, this is absolutely a reference to one of System Shock 2’s most asinine enemies.

Does telekinesis fit into the lore? I thought we had a no mindpower rule?
This is the gateway to midi-chlorians.

I’d like to have various mutated/zombified animals in the labs, as a sign of the experiments being conducted on them.

Seeing this thread has just reminded me of how much I hated those little buggers in System Shock 2. 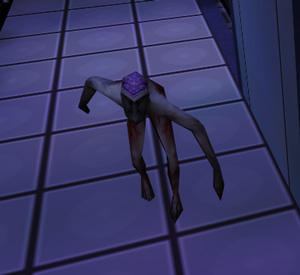 With a bit of modification, they could work in DDA. Just drop the mind powers in favor of something a bit more biological in nature… hopefully not throwing toxic poo or anything.

You could make them very rare and have a lesser version of the mine mind rapers.

[quote=“Rivet, post:4, topic:7192”]Seeing this thread has just reminded me of how much I hated those little buggers in System Shock 2.

With a bit of modification, they could work in DDA. Just drop the mind powers in favor of something a bit more biological in nature… hopefully not throwing toxic poo or anything.[/quote]

Don’t you want your own swing and all the bananas you can eat, rather than having to put up with some overbearing supercomputer or creepy biomass?

And yeah, pyro monkeys were no joke. DDA ones might have boosted stats or the finger laser, etc.

Giving -1 because those monkeys gave me nightmares.

But I’m fine with adding it.

+1 to lab monkeys with finger lasers
I’m not completely sure of their role in the Labs, but … FLAVOR

Finger lasers? Wouldn t they light a fire? Then id have to bring a fire extinguisher to the labs cause we all know that fire is basicly a doomsday device that is even more potent then a mininuke…

Labs aren’t made of wood… are they?
I’ve never tried lighting a lab on fire!

Fire destroys pretty much everything that is not made of metal so an entire lab will burn down to its metal components. Set a house on fire and it will burn down to the ground … including the walls (a mininuke usualy doesn ttake out a whole house but a fire lit with a lighter will)

edit: i am not sure if fire will spread down levels so i can only say that it will burn down the lvl of the lab that has been lit on fire

Most lab floors were concrete/rock, last I checked? Didn’t think that would burn. Finale floors, yeah, those are flammable.

I had a spreading fire raging in a lab a while ago. i did not double check on how far it did spread through the lab (i heard lots of things breaking down from the fire from afar) . Too bad that i died before i had a chance to look again … and i never entered that lab again (also0 that world doesn t exist anymore).
So i can not say with 100% certainty that it will burn down … however i was pretty sure from my experience…
Uh i ll do a test run when i am motivated enough

And if concrete doesn t burn , why do house walls burn down? They consist of stone and steel?

Probably the wooden roof that blazes and falls down causing all the rubble to knock the walls over.
People build houses with wood and bricks.

I am done testing this. labs do not burn down so i overreacted about the laser slingin monkeys. You can light several items in the labs but the flames do not spread from there on normal lab tiles.

[quote=“Cherry, post:14, topic:7192”]Probably the wooden roof that blazes and falls down causing all the rubble to knock the walls over.
People build houses with wood and bricks.[/quote]

Generic “floor” is wooden and flammable, yeah. So the roof is too.