Hello. Can someone help me? I’ve been playing CDDA for some time now, and I wanted to give my first successful character some boost, so I tried installing a Stats Through Skills mod onto an existing world. After browsing the internet for advices I figured out that retrofitting such mod would be okay, since it simply recalculates skills after a skill increase. But then…

It simply changed my skills (8-8-10-10 probably, don’t remember exactly) to this. Is there a way I can fix this? Somehow I don’t suppose removing a mod would return my skills to what they used to be.
Thanks in advance.

Seconded. It’s supposed to change your stats based on your skills. Are you using the current experimental and the packaged STS?

Okay, that, I’ve heard of happening before.

If you didn’t already save with the altered stats, you can probably uninstall the mod, as this change happens in game.

You could always try migrating your character Cataclysm Tools to a world that has StatsThroughSkills installed, assuming you’re not too attached to your current one, that is.

Well, yeah, the game has already saved itself. That’s why I guess that simply removing the mod from load order is not going to be of much help.
But what’s the point in migrating? I mean, the current world also has STS installed, at least now. Is that exactly the retrofitting that has caused the mod to not work as intended?

Possibly. I’m not sure.

If you remember what your stats were beforehand, you can use the Debug Menu to reset your stats to them. By default, the Debug Menu doesn’t have a key bound to it, so you need to keybind it yourself. I usually bind it to Backspace.

Thanks! I’ve just successfully edited the stats.
But I still wonder if someone knows what the problem with the mod is and how one could make it work properly.

There is no problem with the mod. It works as intended and increases stats depending on character skill levels.

On the other hand I must be wrong - handle_previous_version will be run after mod is added to existing world.

Well, it probably does work as intended, except that maybe the mod does not have any info on the initial character stats? So MAYBE it adds points to them while thinking they’re all at 0?

Yeah, another question is about that version. What is that even about?

And now it doesn’t work at all. 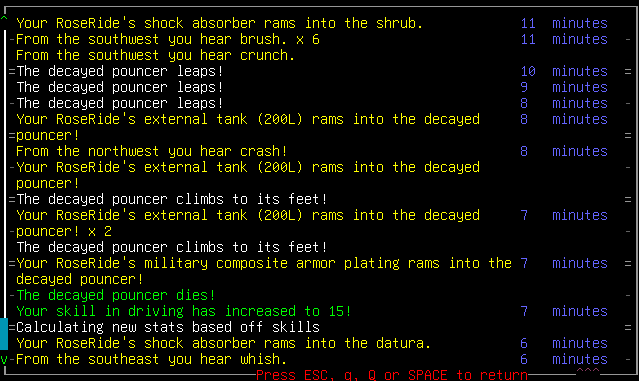 It hasn’t given me any stats yet. Shouldn’t it recalculate every time I level up a skill? I mean my stats are still at their base value.

It calculates based on a curve.

EDIT: I can’t remember the exact numbers at which you get each bonus. You can check the skill groups in the STS documents, and you could either work out the curve with some math or look up the answer on Reddit.

Considering what happened, you may have to manually edit your stats to their correct altered values.

I do know about the curve, that’s not exactly what I’m complaining about.

I’m just asking if there is any way to make it work as intended.

It will say “Calculating new stats based off skills” whether you get an increase or not. On the ones that do increase it will have the extra “Strength has been increased to X”, line or whatever it is under the first phrase.

Wait a second, I understand that. That’s not the point. My stats are still at the same level as at the very beginning, though my skills are, as you can see, more than enough for at least a couple of points increase in stats.

Ok sorry, was just making sure. There was a bug with STS for a while, if you went to line 26 and put – before “handle_previous_version” it would fix it. https://www.reddit.com/r/cataclysmdda/comments/7vw69w/stats_through_skills_not_working_at_all/
Though it was fixed at some point, not sure what build you are on, or which build it was that exactly fixed it. Zhilkin would know much more than I about this though, TBH.

I’m using the latest build and updating about once per every two to three days, so that’s another mystery why this mod still doesn’t work for me. I’ll keep monitoring, maybe it’ll kick in once i get a skill increase that leads to adding corresponding stats.

The mod works. The issue is it is not intended to be added to existing worlds. You have already run this mod once, it updated stats and then you edited stats via debug menu, right?