Some bug upon crash 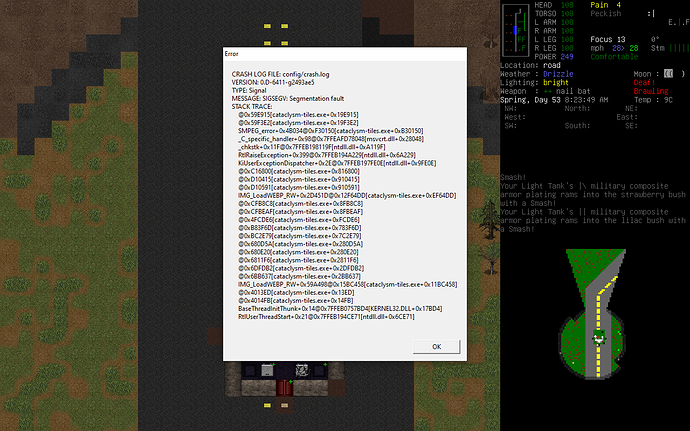 Some weird bug that happens sometimes when I save the game.
The game will save the location you save at, the map memory and revelled map is still there but the area is re-generated (so your memory is wrong) and any items you’ve picked up (that you then put down, stuff in your inventory is unaffected)/vehicles you get disappear.

It seems to have deleted my NPC too.

Issue: Game crash during an autosave

I am trying to debug it. But I had no crash whole yesterday evening, nor today.

The way I got it to happen was to drive a pretty long way into undiscovered map areas, that isn’t the only time it happens but it does seem to trigger it for some reason.

If it only happens when entering unexplored areas and only some of the time, then my hunch would be that it’s a map extra that’s bugging out.
If it’s really REALLY deep into unexplored territory, then it might be a map tile generation thing instead.

Try debug revealing the overmap to show all overmap tiles, and see if the area it’s been crashing in has overmap already set or not. If it’s near a bunch of grey # fog-of-war you might be generating new overmap when it crashes.

It wasn’t that because the ealier crashes happened before I really started exploring, going to unrevealed map tiles increases the likely hood but doesn’t seem to be the only thing setting it off. I had the same bug ealier on when I was just messing around on the farm, I just didn’t realise how damaging it was because I wasn’t losing entire trips worth of loot, vehicles and NPCs.