Should grass be flammable and spread to other grass tiles?

It’s odd that you can burn stuff on grass, and not have it spread. What are your thoughts on it? Field fires would be a realistic addition, however the main problem that I can think of is tanking the frame rate because of an accidental light. It could spread until it hits dirt tiles and then stop, but even still that would potentially burn down the entire forest sections of the map. Regardless of this huge problem, what do you guys think?

I regularly have grass fires spread. In fact most of the times I’ve been on fire come from me lighting a bush on fire early game to roast some squirrel and then having the fire spread through the grass and onto me. Even stable .C had this feature IIRC.

Agreed. I’ve cut down grass to make sure I only had dirt tiles adjacent and I’ve still had medium-large fires burn all over the place.

Have you actually tried, in game, making jerky in a field with a brazier? It’s a lively experience.

odd, I just lit a shrub on fire, and it didn’t even remove the shrub. Are you sure it spread? 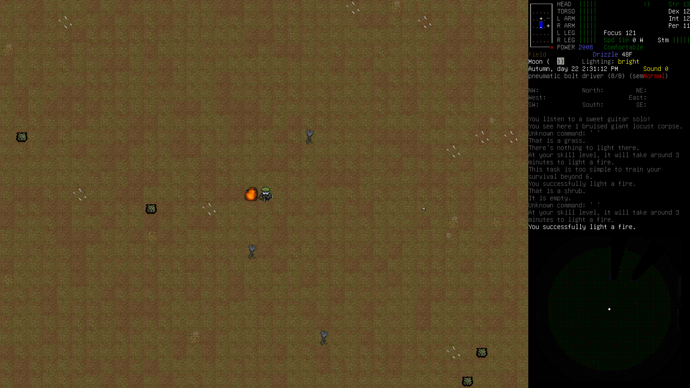 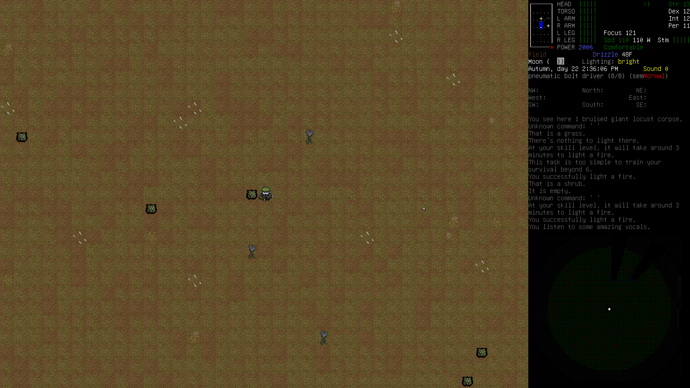 update, it was raining. so I waited till it was cloudy. it removed the bush, but the grass didn’t catch fire

It’s a lot more controlled than it used to be. I just lit a fire on a logs and waited about 10 hours for it to burn out. It didn’t burn all the grass around it, even though I had debug forced the weather to clear.

3 logs were enough to create a fire that jumped around a bit, but never more than 2-3 tiles from the starting location.

I’m mostly okay with C:DDA fires no longer spreading and burning everything in their path without serious effort.

If implemented it really needs to be done in some seasons only. As far as I know, grass does not just burn, but if dry will. Similar for forests. It’s a damp vs dry and hot vs cold thing.

Yea, I was just more worried about it actually burning down the entire OM

–The unholy aberrations must be purged by righteous fire! Let the cleansing flames burn these eldritch foes who hide in the darkest reaches of the world! Nothing shall be able to stand against the might of our hallowed blaze, set alight by blessed matchsticks!
–Basically I’m saying that grass should light on fire. Although I agree with TechyBen that there should be some sort of area/seasonal limit.

I mean . . . Grass is the most common plant on Earth. Nearly every fire that ever happens involves grass burning in some capacity. I passed a house-fire like a year ago and both the bushes and grass were burning.

So should it burn? Sure. Most fires in Cataclysm are intentionally set or involve a building burning down. Both of those situations imply a strong, healthy fire, not a naturally occuring spark or ember that may or may not ignite healthy, living plants.

If you take issue with grass burning you should have an issue with you setting a living tree or bush on fire.

I think fire is good the way it is, but I think there should be a stronger variable as to the speed with which it spreads based on the material being ignited.