So, I’ve been thinking to change the under barrel shotgun mods to be usable on shotguns. Am I a bad person? Lol

My mind says no, but my body says yes.

Is there any good reason why it wouldn’t be possible? No? Then it should be.

reloading instead would make a lot more sense, but no objections here.

I don’t really see any reason why you wouldn’t be able to use an underbarrel shotgun on a shotgun. It’s redundant, and I would argue pointless, but possible.

The only real barrier I’d see is if the actual firearm would not be able to accomodate the underbarrel. Since most things are based on real-world counterparts, this would be possible to look up online.

Again, I’d point out the redundancy – I doubt many real world shotguns would ever use an underbarrel shotgun. 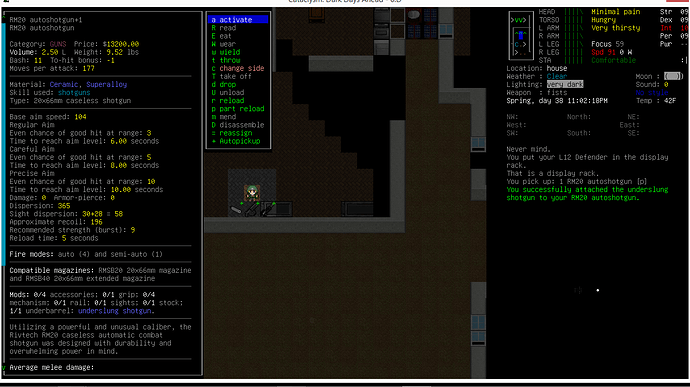 broom with underbarrel shotgun much better though

Gotta sweep them streets one way or another lol

i actually always kinda wondered, that chain-whip thing that lobo from DC comics used, you’d need some weird kind of triggering mechanism to make snapping the whip fire it but it bet it’s 100% doable and not even really that hard.

I’m not actually adding modification slots. Just changing the underbarrel shotgun mods to be usable on a shotgun.

LazyLizard beat me to the logic of this. The only way it would work is if it were ONLY attach able to semi automatic/gas shotguns. Anything pump action won’t allow it from the get go and automatic shotguns are iffy due to most having short barrels. Such are those with drums.

Saiga’s should be…possible perhaps. Being made similar to AK rifles. Fantasy made up ones should have an explanation too. Double barreled a possible mod for the mod could technically get it fit. So adding a mod for the underslung mod to strap it tight.

Master Key however is a definite no go on most. As it is a pump action. So a pump on a pump would work as well as trying to hump a polar bear up the rump.

So we’re all clear, pump action shotguns are already marked as such and can only accept grips on the underbarrel slot. Short barrelled guns obviously aren’t going to have an underbarrel slot in the first place.

All I know is if I want to put a pump on a pump on a pump, no-one can stop me bwahahah.
Also I’ve been thinking about making a potato cannon that can also shoot vibrators. Heh

truth be told you could probably use a paper wad and get the garden variety potato cannon science project to fire vibrators quite easily.

On a side note, nothing beats clearing out a basement of giant spiders followed up with a mall rampage using a machete.

How about a potato gun + compressed toilet paper balls soaked in a flammable liquid+ a sparker on the end of the gun to ignite it when expelled?

not a bad suggestion to be honest, not entirely sure a sparkler would be a reliable ignition source though.

if you haven’t tried it yet (be fucking careful) you should make some fireballs to mess around with, take a rag, some zippo fluid (or equivalent, ronsonol, i guess?) and douse the rag until it drips with wetness, form it into a ball and rubber band so it holds the shape.
light and you’re good to ignite, they’re surprisingly harmless to let sit on the flat of your palm and other stuff, someday i really need to finish learning how to juggle and that’s when this gets impressive.

big thing to remember, is the base of the flame is barely even warm, the top is the pain end, still don’t just let it sit there burning away too long though.

either way, when you need to extinguish just close your hand around it completely to starve it of oxygen, also resist the temptation to throw it at your friends, it’s hilarious, but it’s a also pretty dickish thing to do and not exactly safe either, if they’re wearing a shirt with fuzzies on the front it can engulf them in flames quite hilariously for a moment to be honest…

Sparker= small electric tazer. When the trigger is squeezed. The sparker send the current through to create a small arc of electricity, which then ignites the the flammable projectile. Hope that helps.

You could also have the core a explosive or something if you wanted that. Never made any of this crap mate. Purely game fun for me