Hello! I was curious who is a good let’s player to watch who goes into the late game.

I want to watch someone build a deathmobile and experiment with bionics/mutations. I have a pretty good handle on the early to mid gameplay, but I have limited time to play and want to watch during the day.

I’ve watched Rycon’s let’s play as it seems to be the most popular (or Youtube thinks it is anyway), and it was great to watch, but I want something more advanced.

Is there a particular lets player any of you know who is very knowledgeable about many aspects of the game?

Vormithrax is almost certainly the one that goes into the most depth in terms of actual explanations, since he runs an actual tutorial series, but I find him a bit long-winded in that, so you might be better off watching his quick tips if you just want an explanation of how to play.

On the other hand if you just want to watch someone play normally who’s very good at the game, I don’t really have any suggestions.

I see, thanks for the info. I thought of looking up that guy that does the Cataclysm University vids. That’s Vormithrax yeah?

I have a lot of time to watch while I work, so long winded videos might work out in my favor.

Let me know if you know of anyone else!

I believe so. I don’t know for sure, by the time I found his videos I knew 99% of what he covered, so I just skimmed a few of the ones that sounded interesting.

When I have downtime and feel the Cataclysm itch I play it, never really seen the appeal to watching other’s play it.

Yeah, tips and tricks from other players, especially in areas or ways I might have missed, I find helpful and usually a little less spoilerish. Can always ask a direct question if something stumps me, but part of the fun is discovering stuff yourself, even if it kills you.

Yeah, Vormithrax gets a bump from me. He’s how I learned to play Cataclysm. Aside from the university series (which covers most everything) he also has a tutorial series, which was the first let’s play I watched of Cataclysm.

As for Rycon, well, I’ve watched a lot of his videos, but I’m not a fan of his RP style and he doesn’t often go into specific details about the game (which makes sense, that stuff doesn’t really belong in a roleplay.)

So yeah. Vormithrax. All day.

At least until I launch my own YouTube channel. o_o I’ll plug the hell out of that when the time comes.

Haha, I look forward to it! Would your youtube channel have the same name as yours here?

Well, I’m shooting to launch in January, but it depends on how my work life shakes out.

I guess this’ll be my name. I have a few monikers, and it’ll depend on which seems the most PC slash what’s available.

I got a play through on my channel, in which I just started to experiment with mutagen. Ive installed a ton of cybernetics using an auto doc recently, and built a deathmobile a while ago(modified APC with solar panels, a minireactor, a .50 BMG turret, FOODCO buddy, chemistry lab, UPS charger, and various tools). I also started a NPC base a while ago, but its construction is going slow due to only having two NPC’s.

Cool stuff bro. I’m currently using debug to design a deathmobile myself. I might post the schematics on this site for anyone wanting to make a copy in their game.

Nice! What fuel source(s) are you thinking of using? I like my current design but I know it is far from optimal with security cameras/reinforced windows placement. Would love to see/test drive a few different designs. I just did a super long drive in my deathmobile and I kept on feeling like I was going to run into a tree I wasn’t seeing.

I’ll probably go basic like gasoline or diesel. I want to design a vehicle that anyone can create with a moderate amount of gameplay. Of course, maps vary, and a wide vehicle might be difficult if You’re surrounded by a river. I’m going to check out the medium battle tank and such for ideas on how They’re built. Then reduce weight and add better cargo capacity and make it roomier. Overall, a mobile fortress.

I find that SWAT and Security Vans are the most common “skeletons” for a deathmobile that I find. Of course if I find a APC or Humvee I usually modify those. I usually consider these starting places for designs, since most players wont be building from the ground up. But yeah I totally agree a width wider than 5 tiles doesn’t seem to work at all for maneuverability.

Yeah, I usually go for an A PC myself. But seeing as I’m using debug, now I can go a bit crazy

I personally want to create an end game mobile fortress.

Yeah its insane what you can do with some creativity in the vehicle builds. I saw something about someone weaponizing the water turrets from a firetruck a while back and that sounded like a interesting mid game way to do crowd control. I just baffles me what some people come up with for their murderwagon.

Currently I’m working on a design with tank treads. I’m not quite sure how the turning will work, as I’ve got 3 sets of 4 on either side of the vehicle. 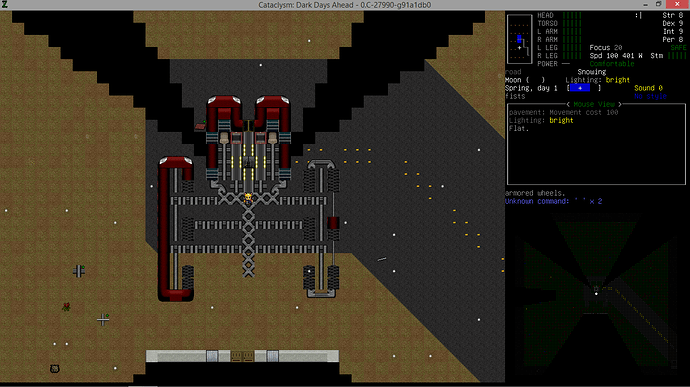 That is beautiful! And completely useless looking for traveling in cities and over bridges.

As for the topic. Aavak has a couple play throughs, he is very similar to Rycon. Another player that I used to watch but stopped because frankly he was to good at the game and beelined for late game to quickly for my enjoyment, was Silver Dragon Gaming. I think he fits the bill for OP. He heavily plays bionics.

Ok, thanks for the info. I’ll look into it.