Ive been playing cataclysm for a bit and I wanted to try to make a deathmobile a which is cool I found a luxury rv, a troop transport with all 32inch tires broken, two armored vehicles, a security van, and a 18 wheeler trailer, any suggestions on how to make a deathmobile
PS: character has integrated toolset

Deathmobile on its own doesn’t need to be anything more than a 3x3-5 heavy framed, offroad-capable, steel or military composite armour plated ram on wheels that can reach top speeds of 80+ to plow through hordes. Extra points for rams on the front and back so you can go up and down streets like a windshield wiper for zombies.

Mobile base on the other hand is usually a really large solar-powered behemoth of ample storage space, a crafting area, sleeping spot, freezer, a driving seat 3 or more spaces away from your walls so that grabber zombies can’t simply yank you out, and turrets galore.

Merging these two usually requires multiple strong engines of either steam or diesel quality but I’ve seen it done with loads of solar panels for electric. A reactor is great for electric but I haven’t been so lucky with finding the cells needed to power it.

I do not consider myself an expert, but I do have a base/deathmobile model that I have tried and tested in many a playthrough; I call it “the armored RV”. 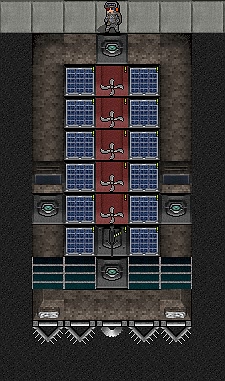 …and a view of the interior: 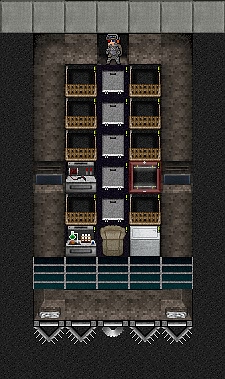 It’s basically an APC which I make a tile longer, with rams/shredders to the front.
The exact specs vary based on what I have at hand: usally it’s heavy frames, heavy duty quarterpanels all around for full 360° visibility, with steel plating at least on driver seat and external tiles (upgrading to military if/when possible).

The seat is reclining, with a down pillow for extra comfort. The internal tiles (3x8) have curtains+door motors that allow me to completely close the vehicle so I can sleep in it; also handy if I want to avoid turrets fire or monsters seeing me (I also have 4 security cameras all around). Also useful to craft at night (there’s also a aisle light that provides light for all the tiles but the driver seat.)

There’s nothing installed in the external tiles to minimize damage from collisions. The turret mounts a M249 just because 5.56 is such a plentifull ammo type, but I’ve rarely used it.
The number of solar panels is most likely overkill (in this example, they are all reinforced and upgraded): I have 4-5 storage batteries + car batteries everywhere I can fit them, and they recharge ridicolously quick.
The two engines are placed in the central tiles to avoid damage. In 0.E I’ve found that a 1,6L inline-4 + a large electric engine is a good combination, powerful enough and easy on fuel.
I have 5 60L tanks for gasoline + a number of other 60L tanks in every internal tile where I can fit them for water, diesel that I find while exploring, ammonia, bleach, and whatever I want to store.

With a minifridge, chem lab (also used as a kitchen), recharging station, vehicle welder and plenty of storage, this vehicle is self-sufficient, manouverable enough and very sturdy.

I also usually find a place with an autodoc and fortify it.
I then use this base to store the mountains of stuff I loot around, food, etc.; I usually place a pseudo-vehicle with solar panels on the roof and connect it to another such “vehicle” with one or more fridges, clean water tanks, chem lab, recharging station and autoclave to sterilize CBMs.

But I’ve also played without a base, just travelling around.
You can easily remove a couple cargo carrier and place seats for NPCs if you like.

what are those different tiles on the sides of the vehicles?

Heavy duty hatches.
One is at the rear of the vehicle (you don’t see it in the first pic because a security camera is in the same tile) and two on the sides.
In the first incarnation of this vehicle I had only one side hatch, to be able to use the welder on other vehicles; then I added another one on the other side too, makes getting in and off much more convenient (especially when you are in a hurry. Like, an horde on your heels and you really need to get to that M249 quickly).

and on the roof you have wind generators? how do they compare with solar panels?

The seat is reclining, with a down pillow for extra comfort.

Great build. Also, thank you: I play this game since 0.C and only now realized that this is a reclining seat, not a recycling seat.
I always wondered why I ever would want to install a “recycling” seat in comparison to a normal seat, if both use the same item and take just as long, while the “recycling” seat has less durability and only around 1/4 storage capacity of a normal seat.
…I also wondered why those can for the most part be found preinstalled in expensive cars. Now that makes sense.

…and I never read the description, it seems.

They should provide decent power - up to 300+ W if I’m reading the code correctly, but they also increase the vehicle’s air drag which decreases speed and increases fuel consumption. Looking at the code, they’re not increasing the drag enough - having multiple wind turbines in line like that should both decrease the power you get from each successive one and increase the drag for each one, but currently it’s only checking if you have a wind turbine at all, not counting each one you have. I’ll go fix it at some point.

A lot of people have lots of preferences on vehicle builds. I asked this question myself last year, if your interested in some reading: Same question as yours!

Looking back on my experience, I would say the smaller the better.

The Security Van you have should be plenty for interior room, especially when you take out the divider. Slap a few solar panels on top, add a storage battery to power stations. Then add damage giving panels to the front, like a ram or spiked ram. Shredders are super great, but take days of work to make. Then you can just roll around running things over. Not very fun, but effective. Loot, rinse, repeat.

A few tips to keep in mind before you start building.:

Above all else, remember that vehicle movement is kindof messy. Monsters can glitch inside some times. Just, don’t drive naked into a hoard, OK?