Does anyone know how the coordinate system works?
There is three numbers in the folder name, another 3 in the file name (of the *.map file), the array in the file has another 3 coordinates and, lol and behold, in the arrays themselves are another 2.
None of the articles so far explain what’s goind on here and I initially just wanted to look for an item in a map file and then go there.

Please no speculation or alternative ways

Oh, and there are lots of numbers (coordinates, possibly) in the debug screen “Info” and some more in the “Teleport” screen. What’s up with those? They don’t seem to correlate to the file name/ folder numbers.

This file has been truncated. show original
1 Like
GiggleGrassGatherer October 13, 2020, 8:48am 3

And the short answer is in this topic.

Not really. The point_coordinates file seems to talk only about the maths and not the storage, and even after 2 times reading it, I still don’t get it at all.

The other topic only talks about it very shortly, does address only one of the MANY places coordinates are mention and there is guesswork going on again.

Maybe this game is only meant for people fluent in C?

Here are just a few places, where some coord-like numbers are mentioned:
Debug/Edit Map 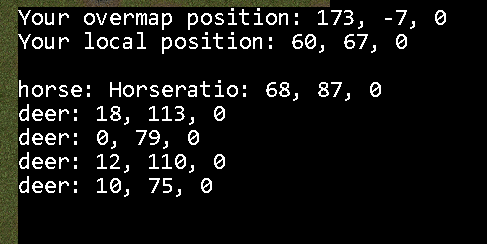 […] I initially just wanted to look for an item in a map file and then go there.

Maybe this game is only meant for people fluent in C?

Well, don’t understand me wrong here, but (from the gameplay’s perspective) the game doesn’t intend for you to open up the save file, search for a specific item and then go to that location in the game or - for that matter - use the debug menu at all.
To reaffirm: It’s not “wrong” to use the debug menu. But the debug menu is more or less designed for programmer, so yes, to make use of some of the values you might need some programming experience. It’s not (or shouldn’t be) part of the “normal” gameplay.

It will take me a moment, but I’ll go through your screenshots and explain what means what.
I’ll also have an other look at the save game files and add my findings to the topic that GiggleGrassGatherer has linked.

There is three numbers in the folder name, another 3 in the file name (of the *.map file), the array in the file has another 3 coordinates and, lol and behold, in the arrays themselves are another 2.

I get what you’re talking about, up until the in the arrays themselves are another 2… I can guess what you mean, but I’d like to make sure…: Can you provide an example of such a situation?

Hey there and first of all thanks for the answer and sorry if I came across a little rude. I actually do know a little C (although I prefer it a little sharper, i ya know what I mean

)and that statement wasn’t really meant serious. I thought it might come across due to the ‘fluent’.

Thank you for the great answer and I am so happy to bring that part of my brain (understanding the coordinates) in order.
Yeah, that array was a little vague :-]

In the items array of a map file, the items look like

and I meant the 5,4, in this example. Might not even have to do anything with the coordinates

Hey there and first of all thanks for the answer and sorry if I came across a little rude.

Don’t worry, I didn’t consider your answer “rude”… I just wanted to clear things up, before we run into some missunderstandings

I use the definitions from the document linked by Zhilkin for my descriptions in combination with your screenshots (a bit out of order).
I’ll go through everything, even the “easy” ones, just so I can refer back to stuff here. So, let’s get started…

The <60,67> are the coordinates of your cursor, relative to the Local coordinates. It starts with <0,0> at the left upper edge of the reality bubble (the part of the world that is currently loaded and calculated by the game).
So your marker is 60 map squares (I’ll call them just tiles) to the right on the x-axis and 67 down on the y-axis from the start of the reality bubble. The z-axis is not shown here.

The 60:67 is again your position in the reality bubble (as described above), which starting point is located in 341:-19. The 341:-19 are the coordinates of the submap your reality bubble is currently in. From what I can tell, these are Absolute coordinates.
So, based on the overmap coordinates of 0'0, 0'0, you’re 341 submaps to the right on the x-axis and -19 “down” (since it’s negative, it’s actually “up”) on the y-axis.
So, let’s check these values…:

In the items array of a map file, the items look like [example] and I meant the 5,4, in this example.

.
Short answer; I think these are indeed coordinates (relative to the submap), but I have to test a bit. Luckily I’ve found my “older post” mentioned in that other topic, so it should be easier to figure it out again.

I do have to do some other work though (and probably also sleep a bit), so I’m going to add the explanation for the coordinates of the save system tomorrow… I hope the wait isn’t too dramatic.

Thank you for the very detailed answer! I read it once and already a lot of questions got answered, I am sure on the second reading, I might even get enlightened