I’ve posted this as a feature request as #59337 but I am curious to hear more feedback. I also wanted to post some mockups of what I was envisioning.

To recap: Driving a vehicle in a 3D video game is usually very fun and predictable. Driving in CDDA is very often a hassle, especially around obstacles and tight spaces.

My suggested feature is to render a ghost image of your vehicle will be in the next tick (read as pressing ‘5’). This ghost image will be much more accurate as your vehicle skill levels up. This means that theoretically with a sufficiently high vehicle skill you’d be able to play out (say) your Akira motorcycle fantasies and effortlessly glide through a city teeming with the undead while dodging and weaving any obstacles.

Not only would this make the vehicle skill worthwhile, but it would also solve what I think is a common source of tedium in playing this game. Ideally the feature would also highlight potential points of conflict and the anticipated damage from a collision. Not only would this aid navigation, but it would also quash ambiguity between different tilesets. For vegetation especially, it’s not always clear whether a given tile is just harmless grass, or a bush made out of figurative cement which will split your car in two. 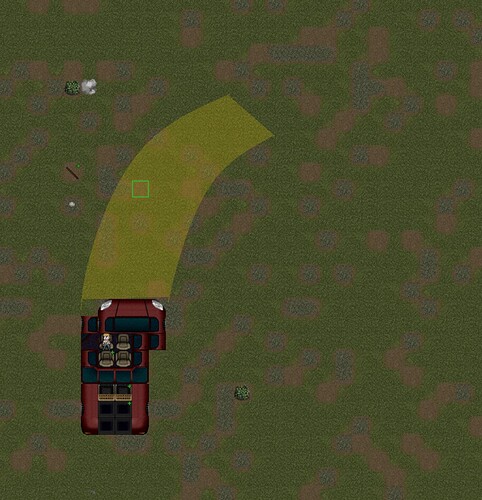 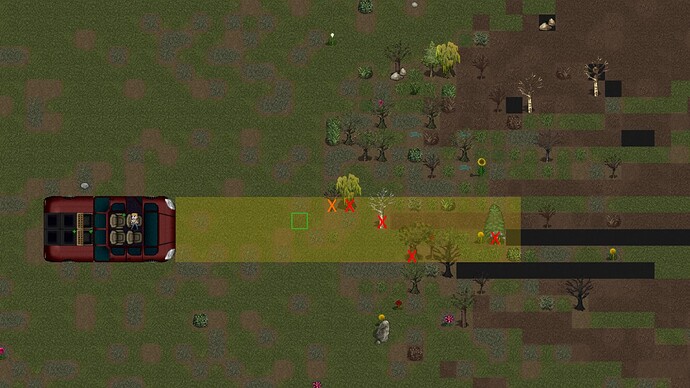 Is this at all doable? The calculation-load does not seem to be that high, especially compared to beasts like auto-travel which have to contemplate multiple possibilities. Is this feature something people would even want? Am I alone in finding driving through cities in CDDA very tedious? Discuss!

I dunno how this can be done, but I can certainly alleviate your concern in being the sole person to want this as a feature. Hey, at the very least there is two of us, eh?

I hate having to carefully and painfully slowly manoeuvre through cities and roadways.

Frustrations aside, I’m no programmer (the farthest I’ve touched the code was to make simple json-based gun mods), but I’m pretty sure that this is possible.

Everything that makes this game less tedious and more intuitive is a must, in my opinion.

Id like the next turn ghost to be standard. The skill based predictive highlighting seems unnecessarily complex and sounds like there’d be a lot of overhead.
The current ‘losing control’ mechanic that happens with low skill could be extended to speed control as well instead. It would definitely make you want to practice first if there was a risk of absolutely tromping on the accelerator when you meant to stomp on the brakes.

I dunno about you lot, but the thing that tripped me up the most was achieving a steady acceleration/deceleration and maintaining a desired speed. It was all sudden acceleration followed by overcompensating on the brakes. This state didn’t last long, but I’m sure I would have wrecked of I’d tried to go on a drive like that.

Driving really isn’t that hard, in a modern car. Something you welded together out of scraps and liberated parts from disparate vehicles should be more of a chore, if only because it’s hard to get the angles right with your eyeball and your steering alignment is off. Even a few degrees difference in alignment between the wheels can make your car pull or lessen your control. Loose tie rods cause a wobbly and meandering driving experience.

Id like to see a system where driving skill of players was coupled with a driving difficulty score on vehicles. Something like a moped is absolutely going to be less difficult to operate than a semi truck. The current system treats both vehicles the same. Edit: maybe weight affects things? Not sure what the current system is looking at aside from skill level. Either way, it’s incredibly quick and easy to level up to perfect driving and the skids at low levels hardly affect things unless your driving recklessly fast already.

Edit: a typo leapt out at me

That suggestion is so good that it needs its own discussion topic to be honest.

Exactly what I think. This game is very complex, almost bordering on too complicated, so any ideas that bring quality of life changes, I’m sure as hell in.

In my opinion, quality of life changes have to be a top priority for further developing of the game, but it is not very interesting from contributors point of vew. Look at Dwarf Fortress on steam - it takes years and tons of work to implement necessary changes in UI, mechanics, etc., so the game can be enjoyed by, uh, humans, you know.
Second top priority should be interesting quests and stories, but…with CDDA there is always 1 main question - who is willing to do all the coding? Without it all discussions about any changes are deadborn.

Driving skill is not useless, people who say to switch the skill off to save focus are saying there are other skills you might want to prioritize. Higher driving skill lets you navigate more easily at higher speeds. Try it in debug, turn off monsters and drive a car through a city at 30mph with 4 skill and with 10 skill.