When you use this command, it will instantly and automatically turn ALL NPC’s who hear it into your followers.

This will also break all missions they have given or can give. As their NPC code is overwritten totally

I tried this new command while in the refugee centre and now everyone within the centre hall has become my follower. 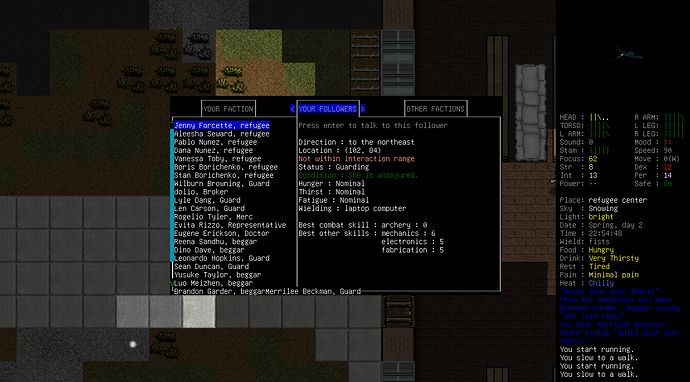 Also this one, when trying to drag a motorbike

Damn that is seriously gamebreaking holy! Hope it gets fixed quick.

I will have to export this character to another game, as this bug also breaks all missions those NPC have given, or can give.

In other words, dont try this in your own game

Hmmm… Sounds like a bug exploit. Lemme try for a moment (before it get fixed)

Dont try it on a main character, around important NPC or quest givers.
You will wipe their code, and replace it with a standard NPC follower code.

I dont think you can fix it once done

Yeah, I encountered the problem you’ve got.
Well, if you leave them, their unique npc code returns back to what it was before (bad thing is, it will consume lots of your time)

Really? Cause when i tried that, they just turned into normal NPCs and started roaming around

Well, I dunno why… I’m using a pretty outdated experimental, I guess that’s the reason

Issue: All NPCs transform into followers after yelling to "follow"

I hope this gets fix immediately

For that movement thing, I don’t think you can drag a bike , and the error is a joke to that, as I don’t think someone’s gonna see errors and just leave them there without giving reference to them.