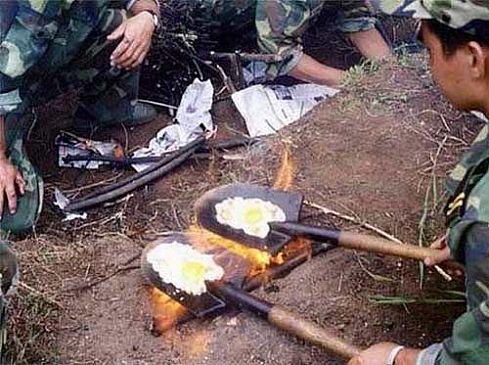 I don’t think so… if we add this, we will have to add… basically most metal stuff.

My grandfather used to have a shovel that served as hole digger, fry pan, paddle and snake walloper all in one, they work damn well for cooking.

[quote=“StopSignal, post:2, topic:6824”]Eeeugh.
I don’t think so… if we add this, we will have to add… basically most metal stuff.[/quote]
What? Pot and pan’s are already there. Add entrenching tool and shovels. C’mon - meat can be cocked on the pointy stick’s already

Mmm… looks like a good enough idea but remember that eggs don’t take very long to cook; cooking a bit of meat on a shovel would take longer presumably, and unlike a pointy stick it would take a while for the heat to reach to the meat, as frying pans are designed so heat can radiate off the metal it’s made from. As for shovels they’re just made of plain metal.

I’m not suggesting meat etc.
In my IRL experience all kind of stick’s are much less of a hassle for cocking raw meat chunks. Never tried doing meat on the shovel, tho

We used to do it with sausages and chops all the time, they worked out fine.