Kettle did some mods including a potato one

so, i made some mods. what are these mods? these are they.
i felt one big post was better than a bunch of them. i’ll try to keep this updated.

constructive criticism and suggestions welcome. be gentle with me.

[1] shinigamimod is totally inspired the japanese grim reaper mod - i started fixing it, then just rewrote the whole thing and added a whole bunch of weapons. the new scythes all have sprites in @ChestHole’s main tilesets. a few of the scythes come from Soul Calibur.
[2] potatomod is in Crazy Cataclysm now! \o/ yes, it’s totally 100% a craftable GladOS
[3] gunslingermod is totally still in progress. it’s playable, i guess. but not finished at all. i’ll get on that.
[4] boot sheaths and the weapons in randomkettlemods are from the japanese wiki - i just didn’t like the rest of what those mods included : https://www57.atwiki.jp/cataclyj/pages/235.html

Wow that’s awesome of you, thanks!

Hey Kettle, excellent work with them so far! Im enjoying the totally not a lightsaber one especially, seems like its got a good amount of work for it’s payoff.

I have detected an issue with the gunslinger mod atm, where the gunslinger kit doesnt seem to have a quality to it, as the game finds an error with whatever it is trying to describe itself as (e.g. whether its got lvl 1 fine tuning or lvl 2 sewing etc.) not sure what the problem is as far as that goes, but thought you might want to be aware of that.

Edit: Also looks like portal satchel isnt in the misc mods github, unless thats just on my end for some reason.

ahhhhhhhhhyup
gunslinger totally isn’t done yet… i put a PR through to change a tool quality for it then promptly forgot about doing anything with it to match that :3

i’ll reupload the portal satchel now, thanks for letting me know!

okay, universal satchel is in /randommods now :3
you can find the recipe in prisons, by reading visions_solitude

so now it needs a lab run, for the portal; a vault, for bio_teleport; and the prison for the satchel_universal recipe.
but it carries pretty much everything. including you, carrying it.

i might put some more weird recipes in that book. it’s rad.

It looks like they aren’t supposed to be but in the versions I downloaded the Hack the Planet mod and the random mods both have the identity randomkettlemods.

hahaha yeah i JUST fixed that. i’m an idiot.

And I just got this error with the Hack the Planet mod. 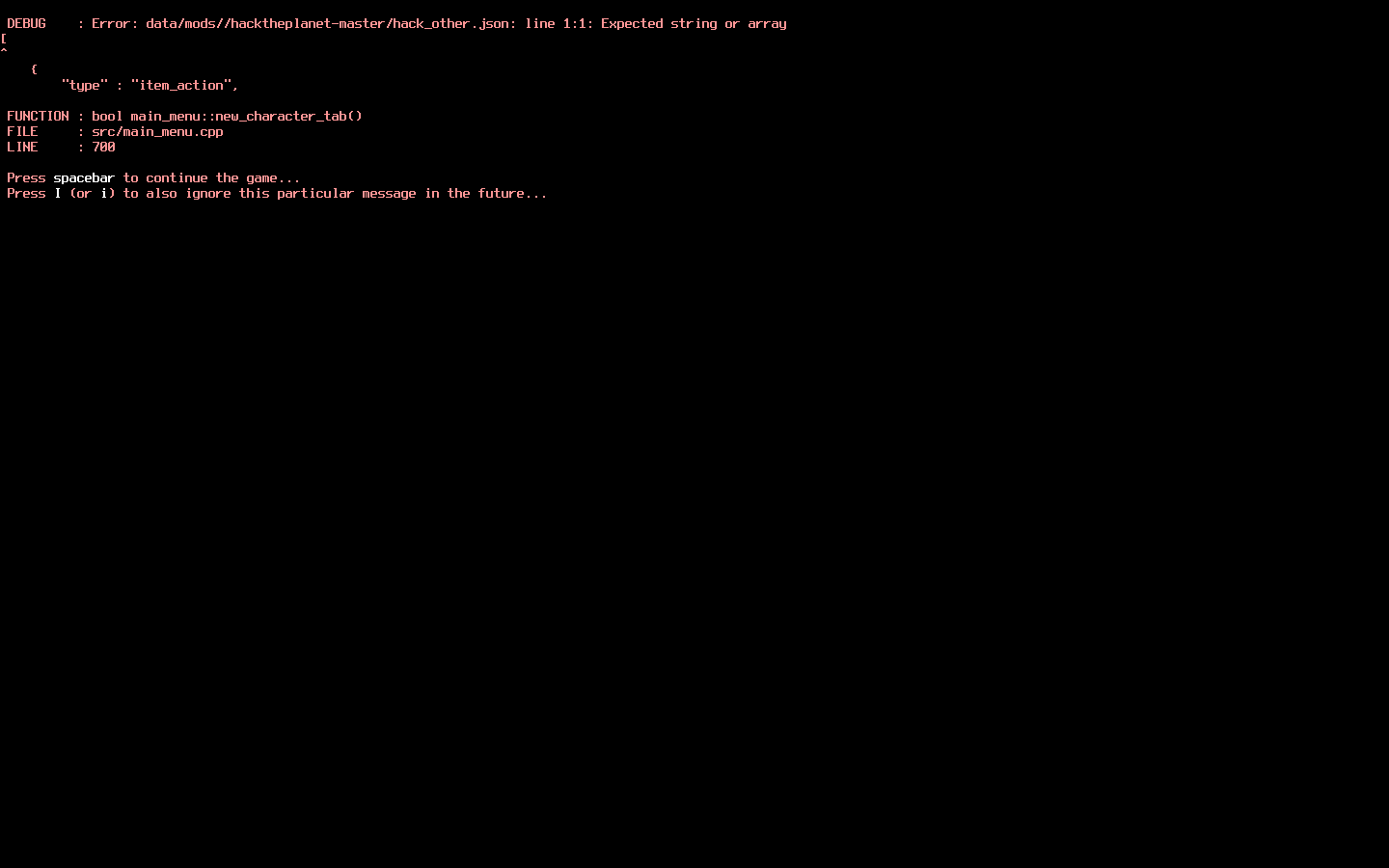 Not sure if you fixed that while fixing the identity issue, I just did a manual fix on the ID. And it apparently won’t let me create a new game with that error.

that’s weird, i don’t get that…

redownload it maybe?
have you got lua support on your version? i think they all have that now, though…

I should have lua support. Not sure how I’d check but I use stats through skills and I’m pretty sure that requires lua support. Using the most recent build through the launcher.

The problem persists after redownloading and after replacing the contents of my hack_other.json with a copied and pasted version of the file linked. Anyone else having this issue?

i’ll have a play around with this in a bit, and get back to you (:

edit: okay, i can replicate this if i don’t have any other mods loaded?
i don’t have time to check this out right now, but i totally will soon :3

thanks for the bug checking!

ended up reverting to an old version then re-adding the new stuff…
i have no idea what went wrong. it’ll probably go wrong again. i dunno.

re-download from above, delete the old version

That appears to have fixed it. Thank you.