Just explored a mine and strange temple, thought some would be interested in seeing these end game locations

They really need to fix the headlights when you’re moving diagonally.

Yeah driving at night is a death sentence, but it sure beats traveling by foot!

Well, you can probably set up 2 additional diagonal headlights and that should probably work.

That is a great idea, thanks!

Floodlights are superior to all other lightforms.

Huh, I didn’t know you could install floodlights on vehicles. Ill have to try them out.

Just debugged it to try it out. One problem is your single window and the boards limiting your field of vision including the stow board to the right of the driver seat. Next, place the left and right headlights closer to the sides of the car. They’re too close to the center. And when you place them, set them 2 squares to the front and 1 square to the outside. You’ll have better field of vision after that and still just use 2 headlights. The only problem is You’ll have a bit less light in the center but You’ll still be able to see.
Also the board to the northwest of the drivers seat is obstructing your field of view. Might be easier to just place your seat in the center of the vehicle unless you want to replace it with a quarterpanel.

Nice, Ill make those adjustments when I get back from the temple. Thanks!
I think I might move the cameras to the corners as well, been meaning to do that for a while.

And if the shadowy area is too much for you, you can just add 1 more headlight in the center as an option.

I also checked on the camera thing. Apparently they only work correctly with natural ambient light. I tried combining security cameras with headlights to illuminate the area but it didn’t work.
Unless you just want them to work while you’re driving during the day.

Weird, but yeah I think more FOV during day would be worth it.

Nvm my bad. I didn’t have a camera control system installed lol

Wow, with 3 well placed headlights and the security cameras installed, the FOV is great.

Nice! Thanks for looking into that

This is the way I set mine up. 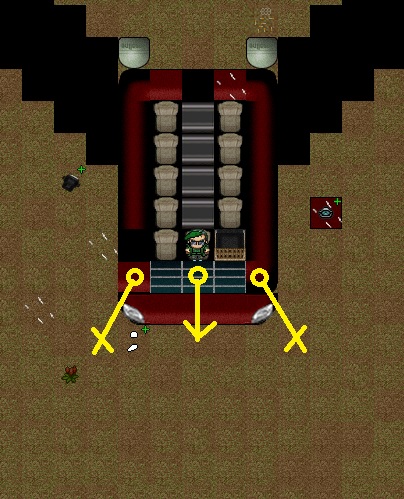 Oh my that is so dope! That is straight up Mad Max.

I am thinking of making some of those adjustments to my vehicle, but I need to find some reinforced glass panels if I want to add a window. Also I was planning on playing around a bit more with my new artifacts, maybe explore the police hub or go looking for blob globs/sewage treatment facility to make more slime mutagen. There also are a few banks I wanted to loot.