Okay, so I’ve decided to get back into CDDA after some months of absence, and with recent changes I’ve had some trouble understanding the new game mechanics. Especially when you field dress a human body, then quarter it, and then make a quick butchery of every quarter and, as a result, you get THIS:

It’s all that meat and dairy. If you are what you eat, then he was half cow.

Hmmm. I guess the quarters must not have registered that you already pulled the stomach out when you field dressed it.

I haven’t seen any mutations on that guy. Not sure if they’re still depicted on the same screen as the clothes and gear are.
Also I don’t remember getting a stomach from dressing a corpse.
Also, where’s my offal?

Humans don’t drop offal, and the cow mutation was a joke I think. It would take a big brained coder to somehow finagle an extra stomach into the butchery yields on a post-thresh cattle.

Oh. Well, I never was into mutations, anyway.

I guess what happened was due to the fact that each quarter is treated as a separate human corpse (maybe??). At least it showed 4 ‘human’ lines in the butcher menu.

I got the same thing from a Giant Ant about 7904. I’m still pretty new to all the fancy new butchering stuff, so I was trying it out on one of them to see what can be used in combination and got one stomach from field dressing, then quartered it and got another from butchering one of the quarters.

I also quartered an acidic zombie and each of the quarters were still yellow, like they could revive. I quick butchered them, but now I can’t help wondering if they would have revived into four zeds, or if each quarter would get up and walk around on its own. That would be funny to see.

Cloning Scientists/Shockers for unlimited CBMs, anyone?

filed dress is enough to refresh the meath and stuff. no need for quartering it. it does seem like a bug though.

I think I found it –

Full butchery does not result in additional stomachs because it’s coded differently.

Of course I could be super wrong, but that’s how it looks to my baby coder eyes.

EDIT: And If I’m right someone else has to fix it because I don’t know how to use github

Semantics I know. But for piece of mind until the bug is fixed. Assume you cut the guys stomach in parts, instead of whole portions.

Check this for results and mutations.

Also, not to start another thread…

I can’t even trade normally. How come that a trader at a ref center has limited storage and can’t accept my piles of garbage? What am I supposed to give him in exchange for some ammo?

A human stomach is just big enough to count as two in-game units of stomach. Nothing broken with that.

You’re right. The in game human stomach is .25L

Though it does suddenly become strange that I can make two sealed stomachs out of a single human stomach if that’s the case.

Wow. That… is unexpected.

The problem with what you say is that the stomach is initially removed when you field dress the corpse, yielding 1 unit of human stomach. If the stomach is to be harvested, it should be from this point, in my opinion, because you’re removing the ‘guts’ of the creature.

THEN when you quarter it you get 4 pieces.

THEN when you quick-butcher the pieces, each piece yields an additional unit of stomach.

This means that from butchering 1 human corpse I get 5 units of stomach. 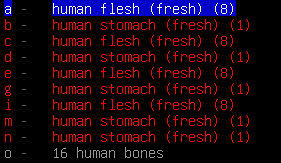 Because of the way full butcher is coded, it does not grant additional stomachs when butchering the quarters.

Well, when I got 2 stomachs, my survival skill was quite low, so i might have lost some.

Yeah, sorry x_x I should have been more clear. It is based on your skills and stuff.

I think the MAX you can get is those 5.

Yeah, I got that. It’s just that my case is not the worst one.