I’m trying to fill up my fridge and it’s never up to the top. It actually does not allow me to put more stuff than 65L of volume while clearly indicating its full volume is 75L. The picture is below. Is that a bug or I am missing something? 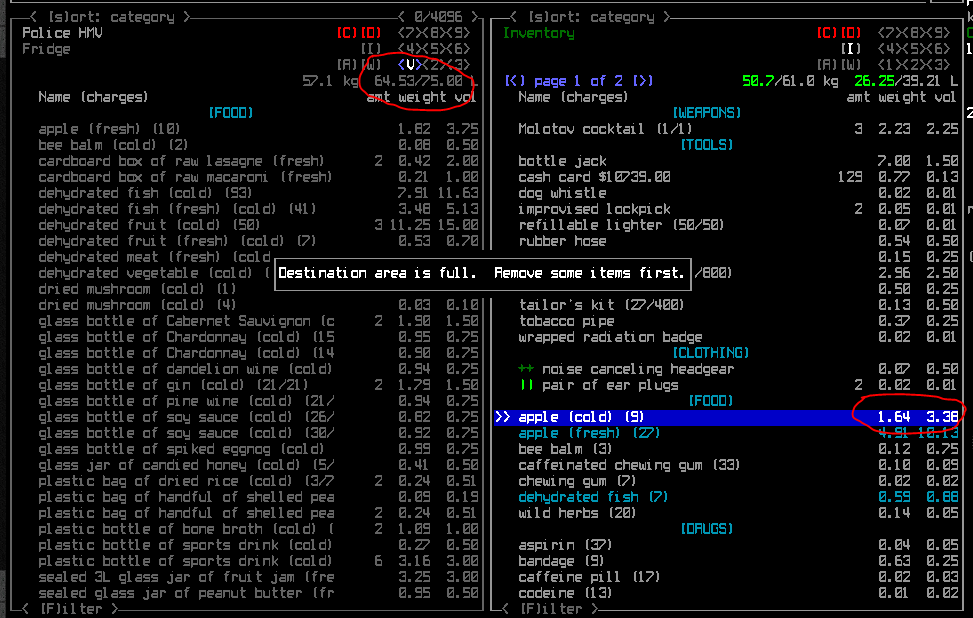 Do you have any filter active?
The volume shown is only for the items that are not filtered out.

Could be the fact that its trying to place 5 apples that individually have that volume amount, which would be about 15 L of storage.

I had a similar issue. Removing and replacing the contents of the fridge show that it’s actually full, so I think it’s a display bug.

This is why you use a DC Fridge

What is a DC fridge?

Those gotta be a goddamn gigantic apples, don’t you find? More than 3L each?

Take down an actual fridge and you can craft a DC Fridge with 350L of storage. Its from Cata++.

Yeah, the game has really weird sizes for things, like a quarterstaff is only like 2.50 L, meaning it can fit in a sling pack…

2.5L is about right, it’s just it’s modelled as an abstract lump rather than a long pole. Like you could fold it up into a square and stuff it into your sling pack.

I know, but that was actually a sarcasm, sorry. The volume on the picture is a stack volume. The game always shows the entire stack volume on advanced inventory screen.

I had this issue as well. What I think it was was that there were just too many items in the containing space, since removing a lot of low-volume items from the area allowed me to fill the area up to the volume limit with a smaller amount of higher-volume items. I recall watching one of Vorm’s videos a while back stating that there is an upper limit to the number of items that can inhabit an area, regardless of volume limit, but I don’t know code or anything like that so do your own research.

I will play around with items in the fridge today to find what’s causing that.
Meanwhile I just installed second fridge to my vehicle