New poster here, so please correct me if I have posted this in the wrong place.

I have enjoyed some historical reenacting in the past, and so there is a special place in my heart for archaic arms and armor. In particular, early black powder weapons.

Unfortunately for me, these things get too little media exposure for my taste, and what there is, is usually wildly inaccurate. This is of course doubly true for black powder.

Cataclysms’ representation of all these things that I enjoy, in a fairly accurate way, in a setting that makes them justifiably employable, has been an absolute joy for me!

So, in a small effort to contribute to the community, I thought I would offer some ideas to expand the use of black powder.

My design goal is twofold; A) Helping black powder guns fill more combat roles, allowing for more play styles. B) Keeping to weapons that could reasonably be 100% craftable from scratch.

Sadly I have no coding experience. If someone finds my suggestions inspiring enough to add something like them to the game, I would be thrilled!

Specific weapons that I think could be easily incorporated, in no particular order. (pics are from wikipedia) 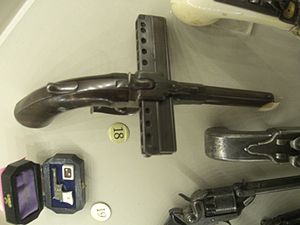 Prior to the development of cased ammunition, multi shot guns were never effective or reliable enough to field in mass warfare. This doesn’t mean that they were not around though. The oldest known revolver was made in 1597 by Hans Stopler in Nuremberg Germany. Harmonica guns offer a heavy, bulky, slow to reload magazine option. A Browning (yes that Browning) harmonica rifle or pistol would fit American historical lore nicely.

To date, all the black powder long arms in CDDA, either smooth bore or rifled, are muzzleloaders. Even the most skilled marksman will only be able to get off four rounds per minute with a muzzleloader. At these speeds a soul survivor facing off against the zombie hoards is unlikely to get off more than a single round before resorting to a bayonet charge. Breech loading guns, even with flintlocks and paper cartridges, can potentially double this rate of fire. Though breech loaders have been developed since as early as the 1600s, I offer the M1819 Hall rifle as a historically appropriate piece that could be found in New England.

As it has already been stated by Kevingranade, cannons firing a shot of more than 1lb is outside the scope of both craftability and feasibility in CDDA. A swivel gun however, would be well under this size and complexity limitation. Though turrets are a rather modern invention, their analog swivel guns, even breech loading ones, were common around the world even 500 years ago.

Hopefully this was entertaining. Thanks for reading!