It is difficult for me to cope with the fact that Cataclysm takes place only in New England. How big is New England? Wikipedia says: " The states of New England have a combined area of 71,991.8 square miles ( 186,458 km2 ), making the region slightly larger than the state of Washington and larger than England.". It seems that New England is quite big BUT “if you start at Houlton, Maine, at the border with New Brunswick, Canada, with Pacific Beach State Park in Washington state as your final destination, the trip is just over 3,500 miles and clocks in at 51 hours. Breaking it down into six driving days of a little over eight hours each, you should plan for five nightly stops before reaching the Pacific”. Even my heavy duty cargo truck is able to drive over 300 km/h as a safe speed and it is quite normal for me to drive 2-3 hours per day on a very high speed. I do not mean that we need different states and their capital cities etc but the present situation with map bothers me a lot and kills my immersion

Or I could work on a Mod with the following changes:

I think someone mixed up England and New England.

Is there anything in the game that really even tells you where you are? I mean, I know it’s in New England, but does anything in game actually reference that?

I don’t think I’ve ever seen anything.

If you start dealing with this it’s just another step before people are saying 'Well I drove east for several hours, why haven’t I hit ocean?" “I drove north all day, I should have hit a border crossing, heck I’d be in Canada by now.” “This town name doesn’t really exist in New England”.

It’s procedural generation. =\ If this breaks your immersion I think you need to suspend your disbelief.

Well this doesn’t do quite what you’re asking for, but it’s kind of similar: 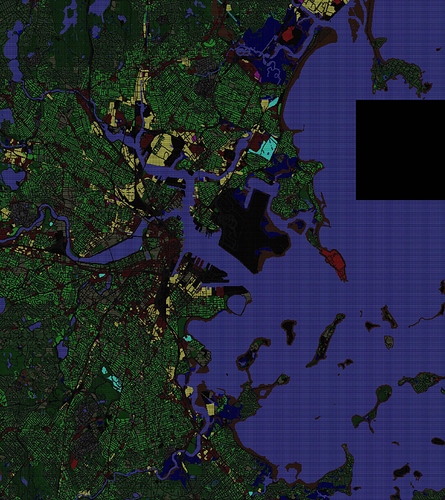 We’re trying to figure out how to handle roads, they end up really messy right now, but we think we have a decent solution for them. The whole thing is looking amazingly good, and I can’t imagine making maps that look like this with procedural generation in a million years (ok maybe in a million, but probably not in the next 10 or so years).

For scale, that black square is one (1) overmap, this picture, the greater Boston metropolitan area, is 5x5 overmaps. If this project pans out, we’ll have an import of the whole state of Massachusetts at this same level of detail, IIRC that came out to 1337 overmaps (no joke, that’s the number).

I know this is pretty much the opposite of what you asked for, but it looks pretty unlikely we’ll ever have an import of the entire contiguous 48 states.

Next most likely candidates are Alaska and Denmark, it turns out it’s dominated by what datasets are available.

Holy crap… That is cool. You guys are awesome.

Oh finally. I can go live in the ocean while the entire continent burns. Love it.

On topic though, there’s no info that really tells you what state exactly you are in. So for all the PC knows they could reasonably be anywhere in the northeast US.

Does this mean I can find out who has a dungeon in their basement? By the way, please add sex dungeons. XD

Um, New England isn’t a state, it is a collection of states that form the northeast US.

But to the point I don’t know if I would know where it took place if it wasn’t for the forums. I’m having trouble remembering anything specific in game that refers to the area.

Every time I see these pictures I want to stop merging and do some coding to bring this into game, but then I open https://github.com/CleverRaven/Cataclysm-DDA/pulls and see this:

I know New England isn’t a state. But I think most of the info about CDDA taking place there is garnered out of game and based on the climate and general environmental patterns.

It was specifically specified by the original developer back before it was dark days ahead and just: Cataclysm by whales.

I don’t remember reading anything about it in game except maybe a newspaper or two might mention it, a computer entry or two, and then the moose and wolf.

Also all the city names are from the wikipedia article, “list of new england towns”.

Way cool, but it needs a legend. Like, what kind of terrain are all the purple @s supposed to be?

Some of them are placeholders, IIRC those are either powerline rights of ways, or highway shoulders.