Synopsis
Before the cataclysm hit you were the owner and presenter of a small radio talk show determind to bring the truth to the masses. After secret documents were leaked to you, you chose to broadcast them to the world leading to a govenment response.
During your arrest the police shot your producer for resisting and you were blamed for their murder. The trial was a sham, you were smeared as a conspiracy nut, a mad man, framed as a murderer and sentenced to life at a high security prison.
Now it’s time for your big come back, you’ll clear your name and show what’s left of the world the truth!

Required Skills
Speaking 3 (2 point in it)

Rules
Challenge: Island Prison Break
No stats through skills
Full nutrition
No Bionics (It’s the elites transhuman agenda in action!)
No (deliberate) Mutations (They are poisoning you! drugs and chemicals to control your mind!)

Goal
Acquire a copy of all Lab Journals, a copy of Ham Radio Illustrated, a copy of Amateur Home Radio for Enthusiasts, recruit an NPC to be your new producer, acquire three radios (your equipment) and take over an intact Radio Tower with attached Radio Shack.

Well, with Zombie Slayer returned to his own world it’s time for something new. I had something of an idea for this a while back when someone did a thread about radio transmittions and have been mulling it over ever since. You’ll play the role of a (slightly deranged) conspiracy radio presenter on a quest to prove they were right all along.

Well, after waiting around for the zombies to kill the secuity bot, I was forced to strip to my pants and swim for it after getting chased off the island by a zombie brute.
I managed to lose the bastard in the woods on the shore (barefooted no less) but I found myself nearly naked with no items in early spring with no sign of civilisation in sight.
With no real choice I set off in the opposite direction from the prison and hoped for the best, it was that or freeze to death.
Got really lucky and came across a soldier body site, on the plus side I had clothes within reach, on the negative? Mi-go and kreck guarding it. After a lot of circling and maneuvering I manged to drive some wildlife in their directing and let them get lured away. I’m in pretty bad shape but now I’m armed and dressed again! 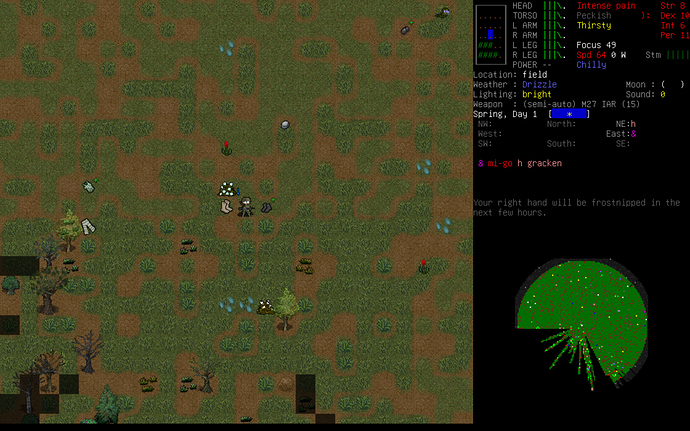 “It’s Gods will that I clear my name and bring the people the truth! Those devil worshippers will pay for their crimes! The people will take back control on this country! 1776 will commence again!” Alan Jewels muttered to himself as he stumbled into the remote gas station.

Mother of all finds! one of those special gas stations and another body site! this one just guarded by Blobs and Amoebic Molds. I grabbed a combat knife and headed straight inside, I’ll go and properly loot that one later. Instead I headed for the gas station, managed to avoid the zombies to the front and snuck around the side, glorious food and loot! 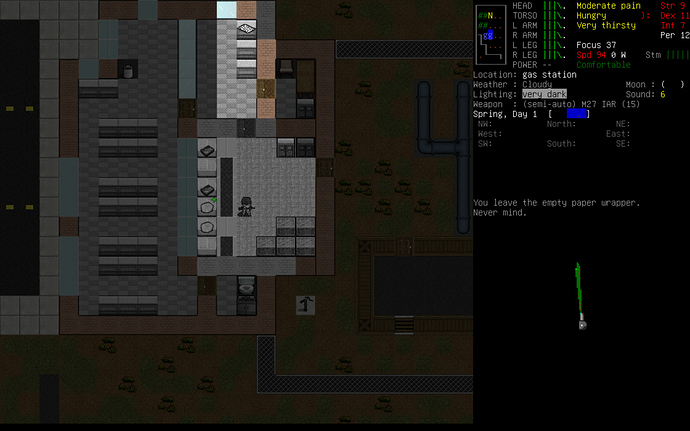 Well despite my survivor doing his upmost to tear his own heart out the run into town was very successful, didn’t get the meds he needed but found a toolbox and a decent condition luxury RV. I’ll be rebasing into the RV and having another crack at the town ASAP. 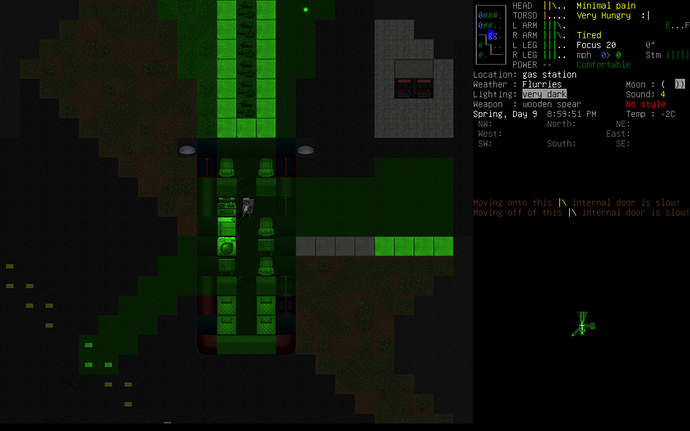 Still not found Alan his damn meds but I’ve got him geared up better and found an atompot.
Screwed up and got him stuck in a closed off room but managed to take out the mob that blocked the doorway, maybe not the most impressive of body counts but not bad for one nut job with a combat knife! 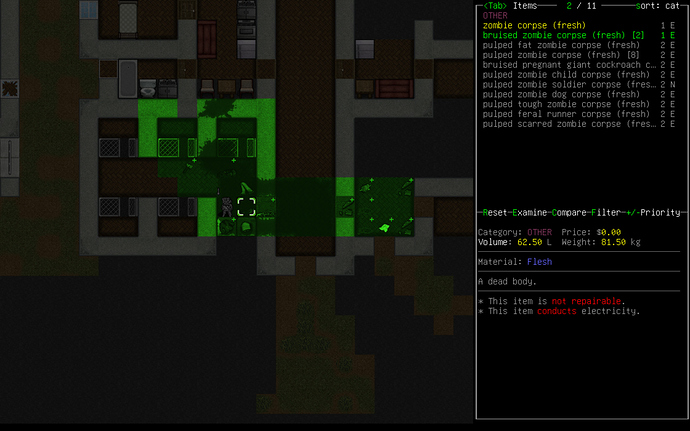 Decided getting a good view from a high vantage point would help me decided on my next move, I’m kind of regreting it, sometimes ignorance really is bliss. 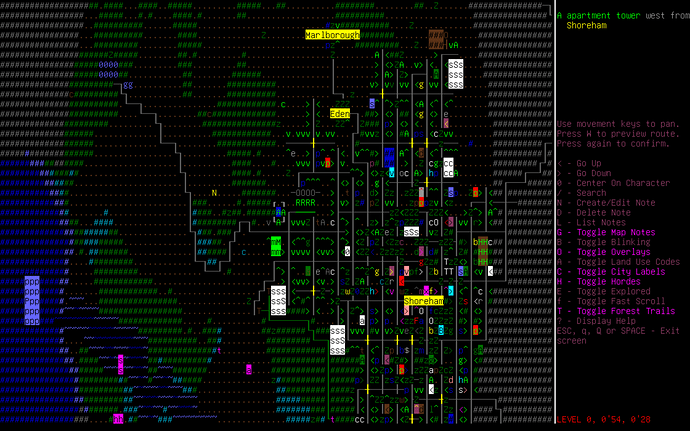 Alan is now ready to set off and show the world the truth! 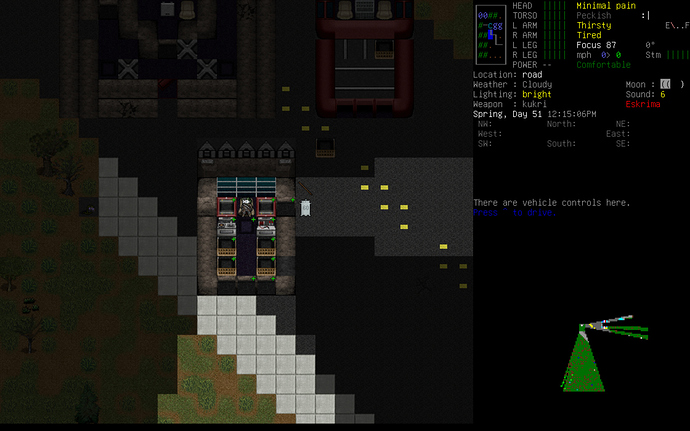 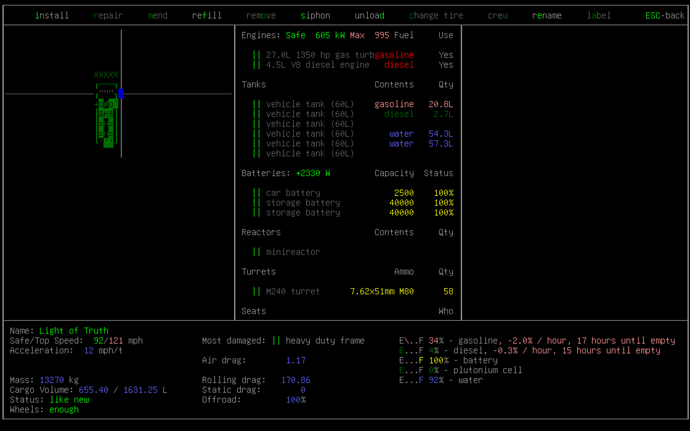 I went with the usual modifed humvee for the base but went for tracks this time after a recent topic about mobile bases (that glorious offroad stat).
I found a nice engine in a main battle tank that runs off both gas and diesel, I’m rolling with that and a decent diesel engine as a back up until I find something better.
I need to find a few more things, an M2 Browning, a few more solar panels, some hauling spaces, maybe an extra storage battery or two, a replacement for the diesel engine, etc but I’m got the basics in and can set off.

Alan glared around him in disgust, the fury of the rightous boiling within him. If only he had a camera, he needed to document this! The people had to know, had to see what the govenment had been doing behind their backs!
“…and with God as my witness, they will see it!” 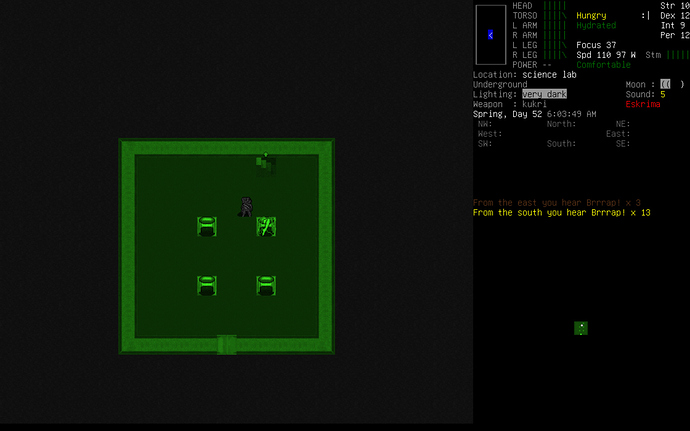 First major step towards actually finish this challenge, I’ll poke around the lab and see what journals I can find and hopefully! find some thorazine.

Steering with one hand, Alan furiously snapped pictures with the other. With every mile he travelled his outrage grew, to think the Satan Worshippers had unleashed such evil in the land, it was worse then even he had ever imagined! It must all be documented, the people had to know! 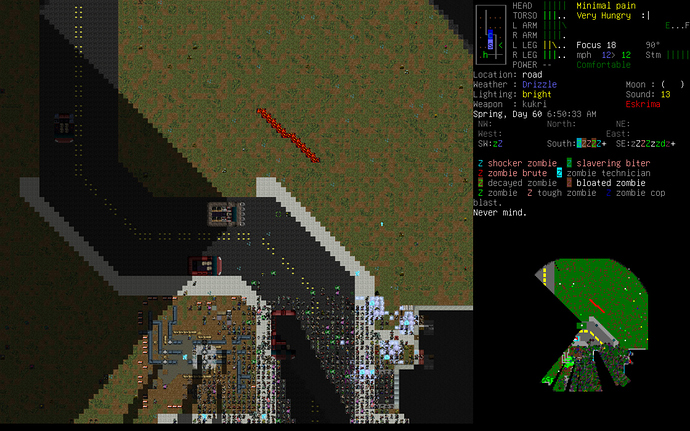 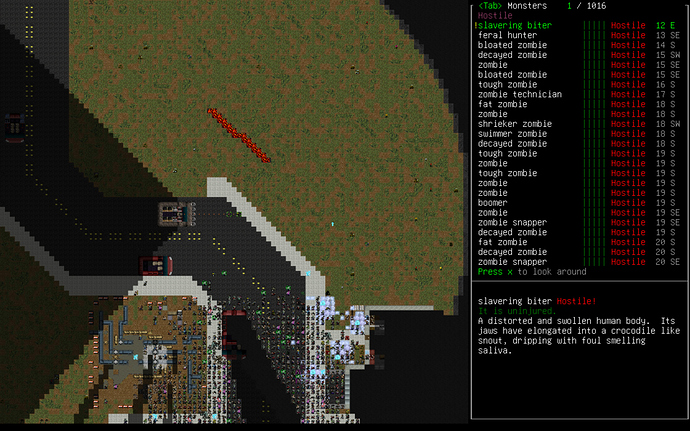 MFW I saw this mess, welp, time to go find somewhere else to explore. 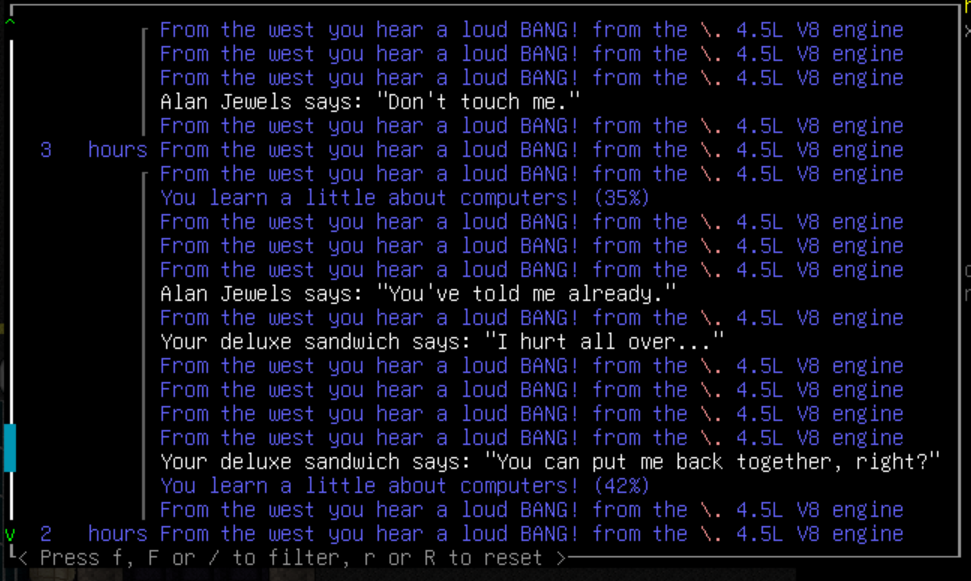 Edit: putting aside the scratching I think Schizophrenic might be my fav negative trait so far, not the “best” since it really can get you in trouble but just best in terms of entertainment. 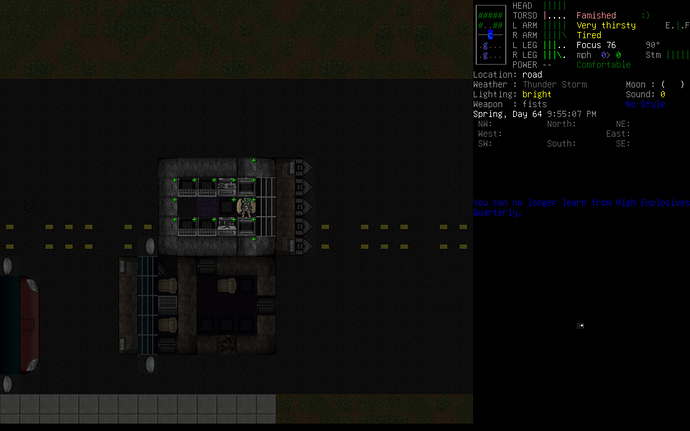 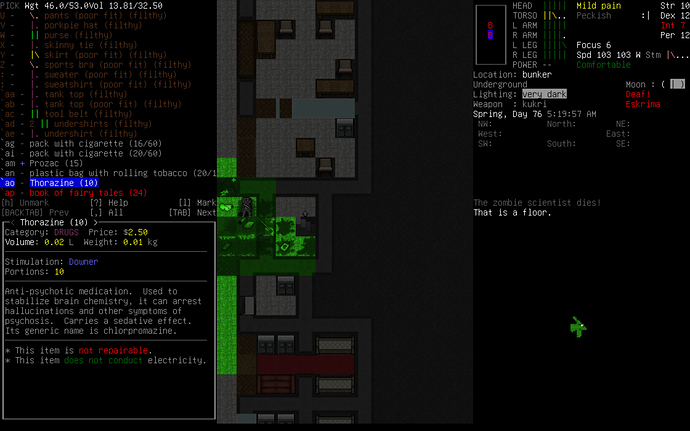 Edit: Oh and I found a (semi) reliable way to take out armoured zombies in melee, combat chainsaws get the job done but they also drain a lot of stamina when using.

I wonder what this relic… 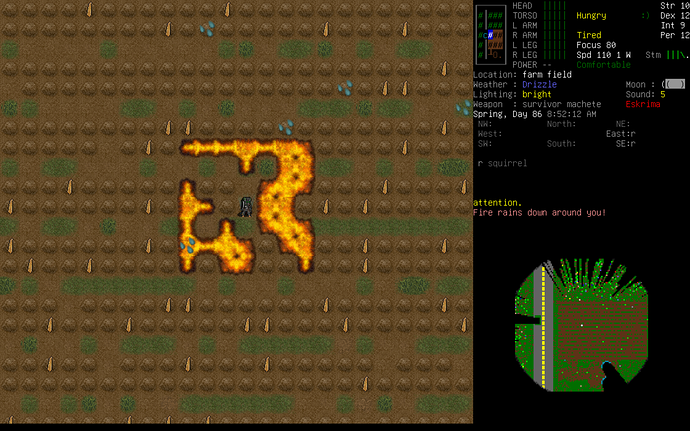 I did get one that causes pain and unveils a portion of the map too so I guess it sort of balances out.

Smaller vehicles have their moments too, definitely saves me some time and trouble. 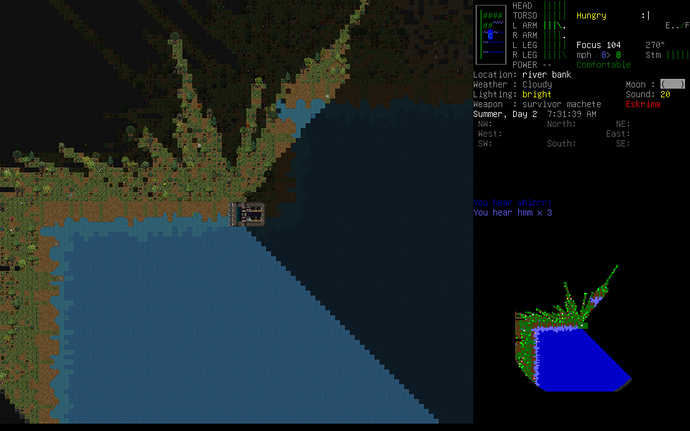 Edit:
Decided to have another look at the research centers since the spawns got buffed there, kevlar zombies and hulks everywhere.
Only one thing to do, UNLEASH THE BLOBS! 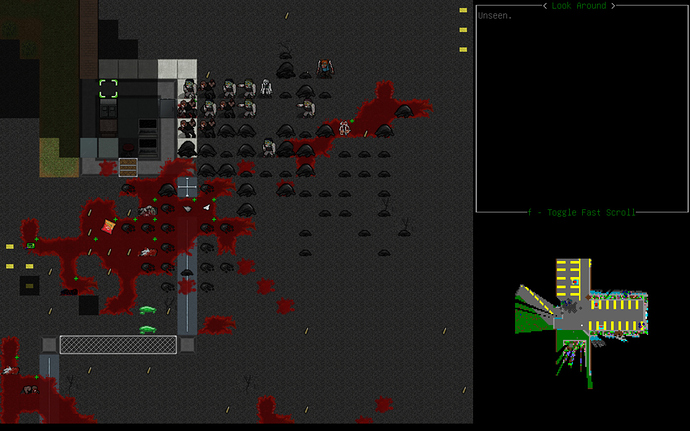 Alan pulled up casually to the govenment lab facility, with a quick look over his gear he prepared to enter. It had almost become routine at this point and while the core of anger continued to burn ever hotter with every new titbit of gathered information, it was juxtaposed by the growing cold horror of what he had seen and experienced.
He frowned as he heard loud noises behind the thick metal doors but swiped the card anyway only for his eyes to bug out in shock as the doors slide away to reveal the titanic frame of one of the undead horrors. Alan had seen these creatures before, taller and many times larger then any mere man with deformed flesh studded with metal and other protrusions. He had seen with his own eyes these creatures tear down concrete walls and shread metal, watched in disbelieve as bullets bounced off their hide.
Stumbled backward, he fell into the driving seat of his mobile base. To his horror the creature followed, stepping into the vehicle. With speed born of desperation, Alan gunned the engine and flattened the accelerator. The creature rocked in the door frame and reached out to brace itself, the steel deformed under its grasp. Spinning the wheel and hammering a foot down on the brakes Alan tried to dislodge the monster but the hulking creature stubbornly held on, instead moving closer to him. Running out of options the former radio host drove out the other side of the vehicle, wincing as he heard the brute roar in frustration and the crunch of delicate instruments being smashed.
Dashing around his base, he lured the creature back out of the vehicle still wincing as ever swing of the beasts arms damaged more controls. It followed, stepping back on to the tarmac. After leading it away some distance, Alan made a dash back to his vehicle, praying with each step that it was still operational. Luck was with him and with a vicious smile he gunned the engine and ran down the brute, it’s hide maybe able to deflect small arms fire but a multi ton vehicle travelling at 50mph was a different matter entirely. 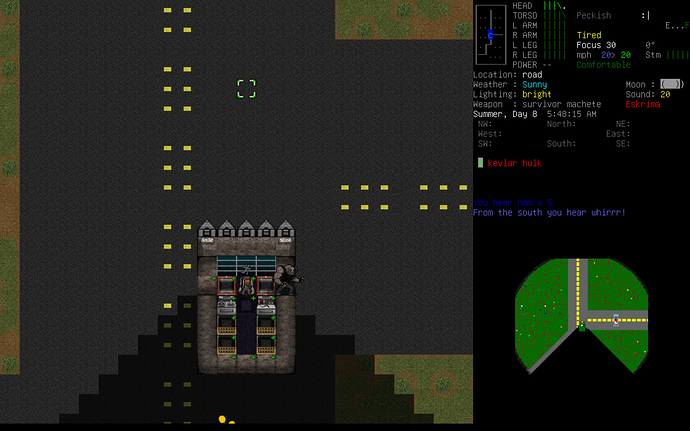 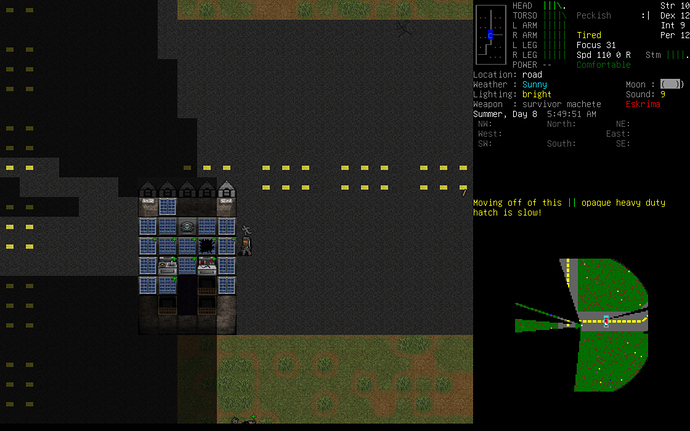 Damn I’m glad I could get that git out before it wreak too much stuff, Alan really isn’t built for trying to kill one of those in melee.
Apart from that little mishap things have been going pretty well, Alan has successful acquired all documents (and a few extra ones) required for the challenge, now I just need to find a radio shack and recruit an NPC to be his producer.

Found it! I’m in the last leg of the challenge! Now Alan just needs his producer and Radical Radio can go (back) on the airwaves!
It’s been a long journey, I wish there was someway to show the complete map. Lots of winding roads and crawling along river banks 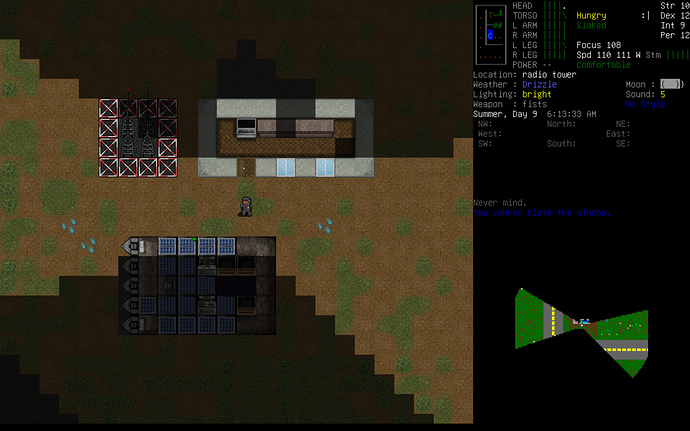 I’ve enjoyed doing a proper nomad playthrough, not being tied to a particular area, just moving on when I feel like it has been quite relaxing and limited cargo space has kept a cap on how much crap i’ve been hauling around.

The radio system crackled and then stabilised, Kimi and Brent nodded in conformation at his look. Alan quietly cleared his throat then spoke into the microphone, “This is Alan Jewels, with the Alan Jewels show. Back on the air at last, and boy do I have a show for you…” 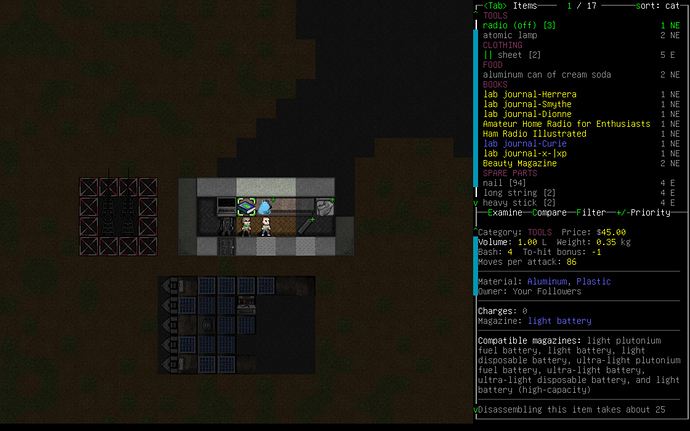 Well, it seems I’m at the end of the challenge. After modifing the vehicle to carry passengers, I staged a rescue from a bandit outpost to get Alan a producer (and a co-host as a bonus). A quick run back up to the radio shack later and we are set to get the show on the road and for Alan to clear his name!

It’s been a fun run, the body site right at the begining was a really lucky find and I actually ended up using the M27 IAR I found there for the rest of the play through. As I said above the total nomad play style has been a nice change of pace and playing with Schizophrenic has been pretty interesting. Definitely something I’ll be looking into again!

Well, time to think up a new challenge I guess

I have a request.

I recently “play now’ed” a female blackbelt, she started with unarmed, melee, and dodging all at level 8.
However, she has the illiterate trait.

I am really scratching my head as to how I will get by without easy access to mechanics and electronics leveling, but I am determined to do the best that I can.

Maybe you can try building an illiterate character? Trying to live with no skill books would be a real challenge. I don’t have any real ideas on what you could role play as, but you seem to have quite the imagination!

It was an interesting challenge especially with the other restrictions I placed on myself.

Ha, ill have to look around for the thread and see what happened.