Can I add Missions (pre-existing missions) to a character I already created?

I want to make a character with student profession but have the mission to eliminate a target (The mission for Hitman “Finish your mission”). Can I access the character properties or something to do so, in game or in the json files or whatever.

It is possible to directly edit a characters data, it’s the long string of hex or whatever with the .sav extension in your world save folder.
Ex: #TGVhbmRybyAnSG9wcHknIENyb3dlbGw=.sav

As to what to edit, that will take some sleuthing. I’d start by tracking down exactly where and how the active missions are stored, likely need the mission ID for that, which is in the data/json directory. Use the cataclysm GitHub search function to help with that.

Alternatively, you could work out the conditions for triggering it, spawn the appropriate NPC and get the mission in game. Or make getting the mission your first mission…

Might be something in the NPC side of things. I only tried debugging myself and all I could do was edit a mission, but not add new one.

That’s all I could think of right now, hope it helps.

edit: @scorp scratch all that. Make a scenario for this. Scenario will allow you to assign a mission and can restrict class to your student. You’ll still need to track down the mission ID, but reworking an existing scenario into what you want is far more straight forward and much less likely to break your save.
Plus, you can make it into a mod and share it.

I have found the mission ID’s but confused as to what am I supposed to edit. 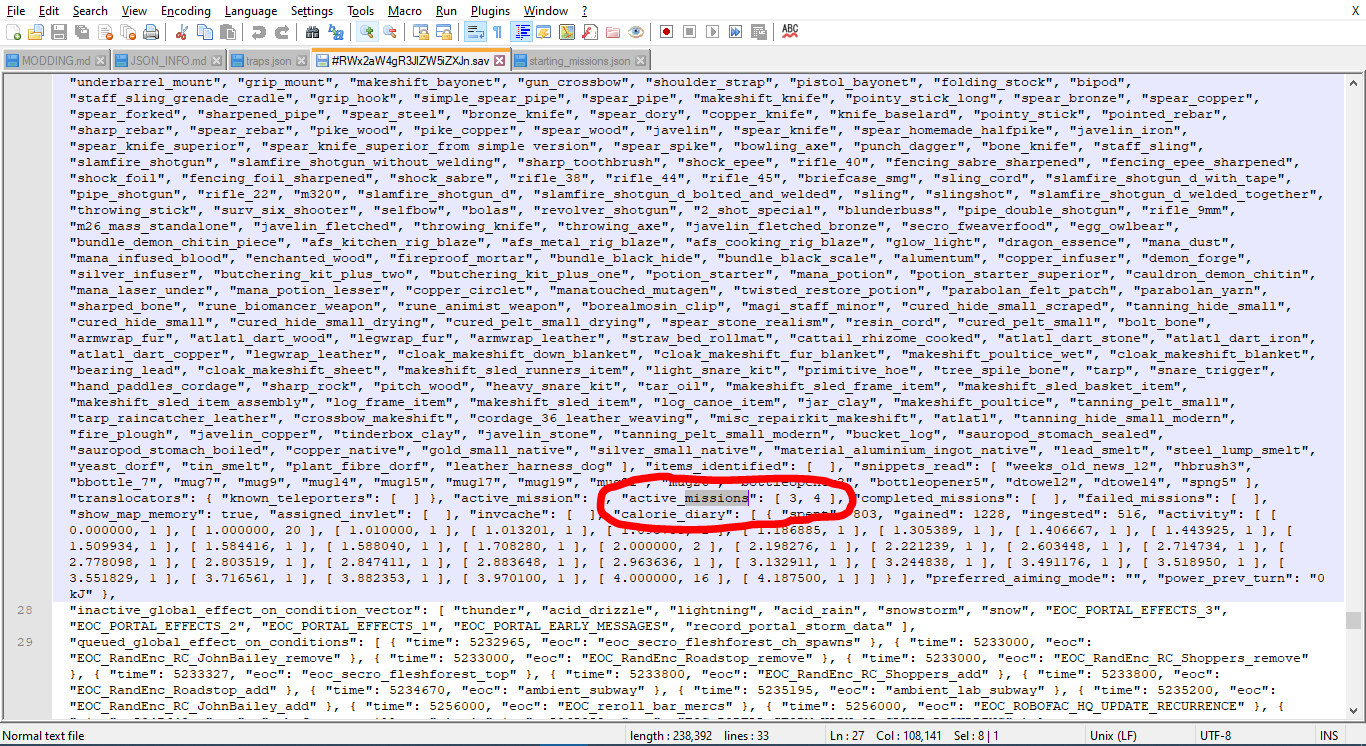 I’m not sure either my friend. Save editing is an arcane science and I tend to stick to copying snippets out of other files rather than trying to do more than fix my keybinds by myself.
Have you been through the documentation? I feel like you could do this better if you had an example to go off of, like another save file with a character on that mission to copy from. Making a scenario would let you do that. I think it’s possible to edit the mission an NPC gives as well, so there’s that avenue to explore.

Here’s a link to the documentation, I’ll put a link to this conversation up in the discord too. Maybe someone will know more there.

Cataclysm - Dark Days Ahead. A turn-based survival game set in a post-apocalyptic world.

edit: apparently the mission definition is in starting_missions.json whcih I assume is in cata/data/json/NPC since that’s where the other mission stuff is.