Bridges are... a bit broken

Are bridges bugged?,and also, is there a way for me to cross one without ending in the bottom of a river? 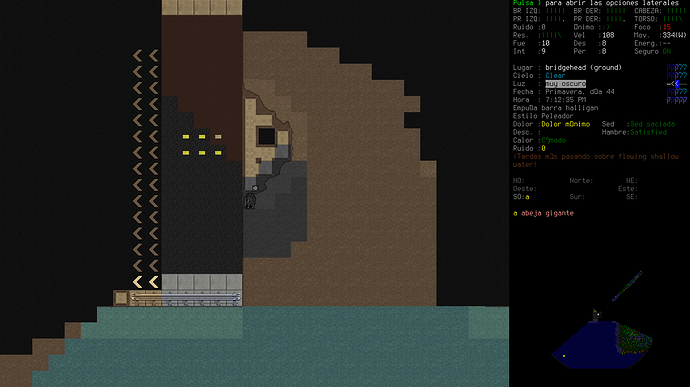 You didn’t state any version, so I guess you’re on an older version (or were as your game generated that bridge), as this was fixed about a week ago:

Describe the bug Loading a save in a world generated after the addition of z+1 bridges (#41135) results in new bridgeheads being...

Either that or those are some truly epic potholes

Which, though, sarcastic as I was for humorous effect gave me a cool idea. Bridge damage/Potholes/“Collapsed portions of a Bridge”.

I’ll run it by Lang and see if he has time or likes it enough for his to do list.

I had the exact same issue a few builds back. I still have some funny bridges here and there but the problem should be eliminated for the most part now. You can tell what’s going on by looking at the overmap. Bridges should look something like <----> this (though I’m using graphical overmap).

Here’s the topic I made. It looks like yours is the “multiple bridgeheads bug” (slightly different from the one in my topic which had no ramps at all). However, I encountered that bug as well. Fortunately, I was still able to find at least a few serviceable bridges in my overmap. Shorter bridges (3-4 tiles including ramps) tend to fare better.

Since then I’ve started backing up my saves before every major patch. They compress down to almost nothing, it’s fantastic. Highly recommend.

I can also give you some character migration tips if you’d rather start fresh. The wiki page on it is mostly right but now there are some additional character variables you need to reset to have all the quests working properly. But on the whole it is easier than it looks, and I’ve been able to manually fix inventory bugs by fiddling with it. Specifically, I kept spawning washing kits on load. The item had been updated and it seems my save had the old one “stuck” in it.