After a while, the came, in large vessels of steel and glass, to harvest the energy of a dying world, powering their civilizations from the tear in our reality.

So yeah, as an end-game content and goal, I suggest aliens. They would show up after a few months, to harvest power from the portals and rift. They’d offer good loots (alien weapons and items) but be extremely dangerous, as they have said weapons and ain’t afraid to use them. Ideally, they’d shoot on sight but have their ships visible from afar (so you can avoid them if you want). Taking them off would require creative use of stealth, night and high-powered weapons.

The parasites of the zombies are aliens, well, alien to this planet, interdimensional species, whatever. I hate how apparently whenever people think of aliens they think of superpower energy weapons and massive motherships. But yeh, we already have aliens, main enemy in the game<3

Maybe I should have been more precise, but I want giant, energy-wielding, mothership-dwelling aliens too.

I would bang the Xeno queen all day erry day. Shame about the acid blood.

Well hey, if people are suggesting terminators, Xeno and Yatuja should be fine.

…except terminators were shot down, so it doesn’t really follow…

I have to admit though that it’s hard to say we can’t have WotW-based enemies*.

*Actually we do have tripod walkers already, which is a WotW reference, but it’s a robot, not crewed by a blood-sucking alien.

So, what are the odds for some insectoid-species alien to slide through the nether portal and onto the CataclysmEarth? I mean, would he/she die instantly or survive to gather his/her bretheren/sisters to become, well, you, but not from your world?
Maybe they’ll just get scared if they stumble upon a gas station. They’ll say “Earthlings are, like, made of solid metal and have huge hose-like dongs. Let’s just get the hell away from this place.”

Aliens would be a fourth (fifth) factions, after Triffids, Slime Fungal and maybe AI. They come later in game, and are significantly more dangerous, being equipped with powerful ranged energy weapons.

Aliens came down to harvest energy from rifts in reality (portal). A typical alien base will be 2-3 ships (metal building, think X-Com’s saucers) as well as a few weird machine outside to harvest the energy. Aliens themselves would concentrate near the settlements, and come in a few varieties: workers (no real weapons), guards (good weapons) and overlord (good weapons, can call other aliens to itshelp). All of them wear powerful and though power suit.

In addition, the act of harvesting power tear reality itself apart, causing many netherworld creature to spawn.

Aliens provide good loot, but you’ll need to pack significant firepower and operate from the cover of darkness to get it, as a frontal assault would likely be suicide. Inside one of the ships, some kind of console-hocking/core-bashing should let you activate a self-destruct sequence to destroy the installation, causing the rift to mend and stopping more netherworld creature from spawning.

Yea that sounds reasonable for a general direction and implementation.

“Earthlings are, like, made of solid metal and have huge hose-like dongs. Let’s just get the hell away from this place.”

Xib has a great point.

11 is impractical because an alien would likely try to Catch 'Em All, and who ever heard of grabbing 6 billion Geodudes?

If we want to talk about appearance, let the description be vague.

A semi-creepy being that slightly resembles a human, with an array of animalistic features.

Though, in a result of my reality being shattered, animalistic isn’t a word… ler.

Aliens would be great… as a mod or something. We already have aliens everywhere in the main game, and the sort of aliens being described are just kind of silly and not really thematic at all.

I’d go with having an option in the menu to play as the ‘classic zombies mode’,‘mutant zombies , smokers and shockers and other curious creatures’ and the ‘no shit , everything that has ever been in fiction’ modes.

The aliens suggested are pretty much aiming to make the game to be saints row IV : the ASCII version.

If we were to do interstellar aliens, we need to do it in some way that’s not cliche. Considering we already have the Netherworldy aliens, it’s incredibly difficult.

I think strange, intelligent beings from the netherworld would fit the theme nicely if they acted bizarrely enough. Like a pink skinned humanoid with mouths in place of fingers. The mouths constantly scream, and it manipulates things with the tongues. It compulsively disassembles electronics, and will attack people to get them. Once it has enough amplifier circuits, it builds a odd device that emits a humming noise and mild radiation. Then the mouths stop screaming and the creature just sits there, listening to the device, unless it’s attacked.

…I for one accept and want to know more about our pink screamy handed friends!

Aliens would be great… as a mod or something. We already have aliens everywhere in the main game, and the sort of aliens being described are just kind of silly and not really thematic at all.

That doesn’t make sense. Why travel trillions of miles - which requires literally astronomical amounts of energy - to gather the energy present on a small planet, when there’s plenty of energy present anywhere else in the universe with stars and planets?

Aliens came down to harvest energy from rifts in reality (portal)

Personally I am not a fan of alien themes as described by the OP unless it is exclusively the core theme.

Could be aliens studying the dimensional collapse/resonance cascade in progress on our world (might actually be a legit reason to make the trip for visitation and observation.)

Or, aliens may simply imply tool-using intelligences of a comparable level to ours wandering over fromthe neighboring dimensions. Scientists, colonists, or perhaps even a military response to what they see as a possibly mutual disaster WE caused (“damn those insidious earthlings leaking all that Oxygen and H2O into our world!”)

Maybe that flying saucer isn’t even a starship; it’s just their version of a 'sufficiently advanced camper van" and those little green/grey men are just as confused as you are as to why they they’re in the pine barrens rather than the ‘skycoral forest’ where they parked last night.

Or you could always go with the Mothmen. They’re an unusual UFO legend from around the Northeast. 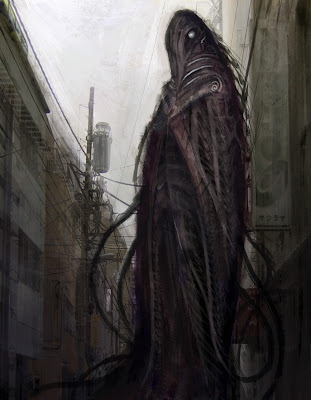 Someone had a good point about the aliens investigating the situation with a view to clean up the planet, once the goo gets critical mass it might use the planet as a beachead to spread.

“Damnit humans, this is why we can’t have nice things.”