You can make edible dehydrated food from rotten food

As stated in title, if your food ever goes rotten you can just cook something that won’t rot like aspic or dehydrate it.

You can use any rotten things in crafting recipes. Like rotten pesto for pizza and you’ll get a perfectly edible pizza.

Yes, this is wrong, but first it’s better to make milk rot not in a single day, but in a year, since, you know, that’s how they make milk now.

Hm. I only get rotten food if I craft using any rotten ingredient. Only a non-perishable final product will become edible once again, such as tallow, lard, aspic or anything dehydrated.

Yes, this is wrong, but first it’s better to make milk rot not in a single day, but in a year, since, you know, that’s how they make milk now.

A year? Is this with or without refrigeration?

I’m getting my milk from the wrong place, either way…

Yes, I have like 80 aspens, you can craft everything that doesn’t rot, so seal these stomach and make that jerky

Also in summer stuff will rot faster, so if it’s winter, put stuff outside and not near flames for it to preserve

–In my experience, the longest time I’ve ever found milk to last is 15 days. That includes starting the game and walking a couple tiles over into a house and seeing a jug of milk. I think he/she might be exaggerating. Either that or misinformed. Then again, maybe he/she is just using an older version or something, not the experimental.
–Also, thank you for this information, I shall now make dehydrated food when need be until this is fixed. When so applicable. I already knew about food being automatically rotted when you make perishable foods, so I never tried other ways.

UHT milk (Ultra High Temperature Processing) lasts for months, maybe even years. That milk has been heated to over 135⁰C and then sealed so it is basically same as canned food and has no microbes inside. But the milk in game is just normal milk and will spoil pretty fast even if unopened.

Maybe UHT milk packages could be added in the game too.

You could easily just introduce canned milk, since that already has code to prevent spoilage.

My experience at least last time I played was if you used a rotten ingredient the product is immediately rotten with the only exception being items that do not rot such as dried foods. 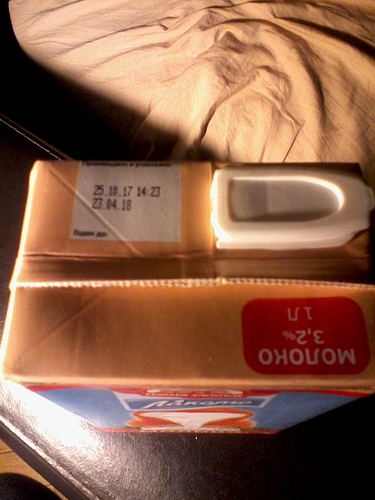 At least 6 months. They always type the expiration date so that it comes sooner than actual expiration, so maybe more.

Without refrigeration. I don’t know how they make milk in 'Murica in those gallon jugs, but milk is plentiful IRL and at least some of it should be packed in TetraPaks. Should be noted that consuming a gallon of non-pasteurized milk before it spoils is kinda difficult. If you’re not living with ten children.

I’m from 'Murica and I’ve never seen milk like that before. Here, they say it’s okay to drink the milk up to ten days after the date printed on it.

And my family of three buys milk in liter bottles and we seldom use it, we usually end up pitching the leftovers out after they’ve sat for a month or so.

I think you’re right that milk (everyone I know has milk) and dehydrated milk should be much more common. When I was a kid we were on welfare and all we had was powdered milk, which was pretty much the standard in our low-income area. That was 20 years ago, though.

Also, fun fact, I sometimes recognize Russian words and your picture made me remember how to say Milk in Russian. So, thanks for that.

In soviet Russia, Milk remembers you.

We also use pasteurized milk much more often that simple milk. Simple fresh milk is much rarer and can be found usually only on markets and some fancy ‘natural foods stores’. So that’s what made me wonder in the first place.

In soviet Russia, Milk remembers you.

–It makes sense milk would be plentiful, as there is many mammals on earth and they tend to breastfeed (or something similar). Of course, if you want to be technical, there is several billion humans in the world, and there are also more women than men. Thus, there is even more milk in the world. Yes, that is a bit odd to mention, but it is true nonetheless.

Actually, i’ve stumbled upon a dairy farm and inside it there are some milking machines and bulk tanks that are ‘firmly sealed’ and cannot be opened. Can anyone tell me what I could do with them?

Didn’t want to create a new thread for a small question, since we’re anyway talking about milk ingame here. 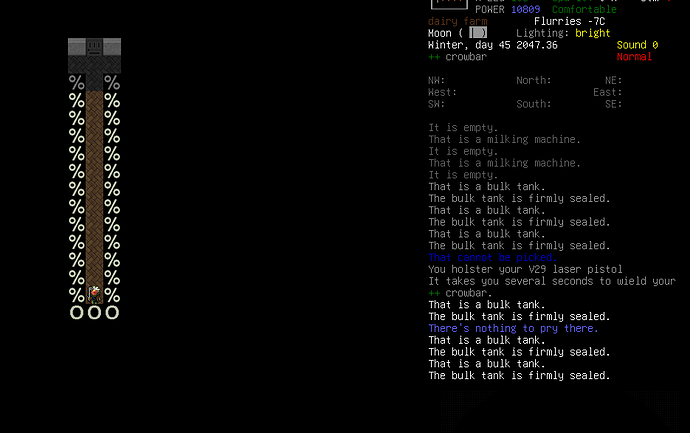 In my experience there’s nothing you can do with them. Smash them for scrap or take them apart for materials.

I think “firmly sealed” is the game’s way of telling you a certain piece of machinery is useless except perhaps to be taken apart for scrap material.