Is it just me, or are guns a lot weaker and more inaccurate in the new experimental? I’ve been playing a custom version of an old experimental that I’ve modded quite a bit myself, and I recently got around to trying the new experimental. Every character I play with seems to be somewhat inept at using guns. I don’t know if this is due to the skill point values being changed to require higher levels to use firearms more efficiently and accurately, guns being weaker, or recoil values being higher in the new version. Any of these things could be explanations for why my characters are sucking with ranged weapons, but I’m not sure what is going on.

In the old version I’m playing, almost anyone could pick up any firearm and hit at least 3/5 shots within a few tiles of an enemy, and guns are usually very valuable early in the game on my build. I don’t know if the game is just being balanced to weaken the value of guns early in the game or what, but if someone could give me an explanation, that would help. I rather liked the idea of frantically looking for a gun within the few days, and then being able to survive fairly well with a decent fun… I mean, gun, until it runs out of ammo. I get that someone could suggest that it takes a lot of skill to use firearms accurately with recoil, but I’m not sure what is causing this trend I’m seeing now in the experimental.

Basically, I understand a green survivor with no skills missing 9/10 shots on a zombie two tiles away, but a SWAT officer who has training with his weapons? Doesn’t make sense to me that they’d be so inaccurate, and that it would take so many shots (3-5) to take a basic vanilla zombie out.

After aiming for one turn, and with all skills set to max, I have an 18% chance of hitting a debug monster from 1 tile away with a double-barrel shotgun.

After aiming for one turn, and with all skills set to max, I have an 18% chance of hitting a debug monster from 1 tile away with a double-barrel shotgun.

I’ve so far not really had a point of comparison because all my characters get augged to hell with bionics and high level weapons before they try to shoot anything, so I’ve had decent success. That said, I’m reminded of something…

How Could You Miss

This has inspired me to do some Zombie Science! (The Cata DDA version of Dwarven Science)

So I’ve created a testing world with basically no spawns, and started as a survivor in a lab, with all stats set to 12, and all shooting skills set to ten.

Spawning in a glock 19, the appropriate ammo, a magazine, and a zombie 2 squares away, I aim at the zombie and find that I have one * (for headshot) Four + (Solid hits) and 6 |s (glancing blows?)

However, at this skill level waiting just one turn to aim increases my steadiness massively, up by what looks like 19 from just one .

This is enough to basically double my original hit chances. Waiting another turn seems to double them again, and by four turns I have no chance to miss. If I steady until the turn that a zombie approaches me (on 50% speed) I pretty much always get a headshot.

So I’d advise gun users to try tapping . at least once before you fire pretty much every time.

Now have you tried this with a rifle of some sort at a distance of 30 tiles or more?

Remade the same character in the wilderness, wished for an AR-15 and appropriate ammo and mag, and spawned a zombie 30 tiles away.

I start with 0 chance to hit. Waiting one turn gives me nine steadiness but only a single | for a chance to graze. I basically have no significant chance to hit without waiting for it to come closer.

Equipping a rifle scope does not seem to help much. If anything, it seems to make things worse. I’m really not sure why, but it seems to take twice as long to get any result with a scope.

So yeah, at long range things are fucked.

So now you see the problem with current guns. At melee range they’re decent, but that makes them worthless. Their effective range is below 10-15 tiles, which is pathetic considering most rifles have a range of 25 or more. The top range for some guns is 60 tiles, so good luck trying to make use of that.

The rifle scope makes the gun more accurate, but it also takes much longer to aim. Somewhere between 5 and 10 times as long, I’m not sure.

Tried again with a scoped Mosin-Nagant, just to make sure I was using a dedicated sniper rifle. It takes seven turns of aiming to get a single +. When I take the scope off, it takes five turns. I think this actually makes the scope a liability?

Yeah, something needs to be done about this.

Try aiming to full. The scoped version should be far more accurate.

Why even tap 5? If one can simply tap ‘p’ which gives you best chances at hitting, or hitting well. Or do I get it wrong?

Doing both increases your chances further, I believe.

Does it? I guess the wait function is useless, since you can just press the desired aim button and fire immideately.
A quick test; notice how hit chances do not change a single bit, only time does, since you have already spent it aiming. Switching modes with ‘m’ key at 0% steadiness shows that I’m going to need some turns to reach different aim levels ant then additional 30 turns to fire. Pressing ‘5’ changes NOTHING, at least nothing observable. The only point I can see here is to wait for the bad guys to approach. 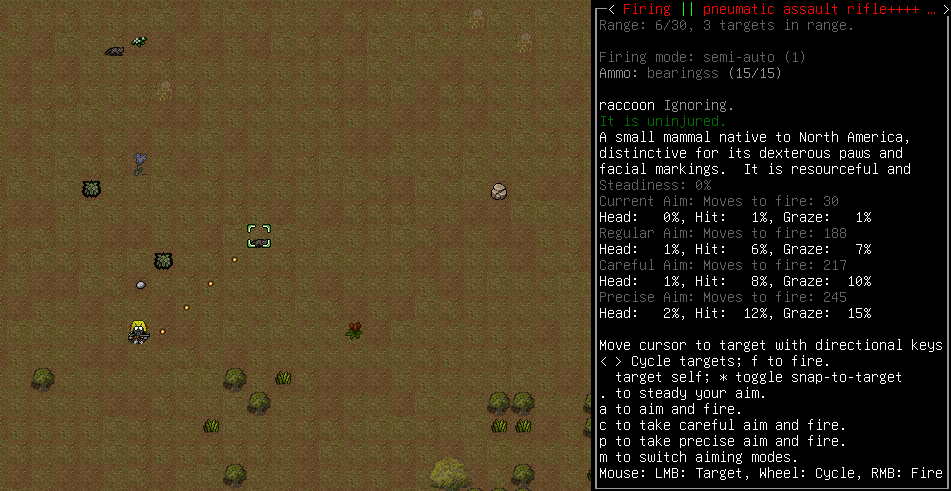 P.S.: just noticed the ammo to be ‘bearingss.’ Strange enough.

Using wait is just a much more controlled way to aim. It comes in handy in a lot of situations, for example just hitting A for regular aim might be more than enough to hit an enemy up close, so I’ll wait 2 or 3 ticks instead to take a slightly faster shot, which could mean the difference between killing your target before it hits you and disrupts your aim.

Precisely. Waiting is useful for fine tuning and balancing accuracy and time between shots. For a zombie that is up close, firing without steadying at all might be a crap shoot whilst waiting just 2 or 3 ticks is enough to score a guaranteed hit. No need to use one of the longer presets and let the zombie get a swing at you.

Plus, sometimes you want to just unload a shotty into a zombie currently attacking you. If you try to precise aim you’ll just fail over and over again.