So, since updating, I’ve been getting this error quite frequently when trying to start a new character. Resetting the world enough times usually fixes it, but what gives?

Updating to… stable? Newest experimental? Which scenario? Any mods activated? Some unusual settings (like “Size of cities = 0”)?

Latest experimental as of a few hours ago, though I was getting the error before that, with the update from a few days ago. I’ve gotten the error on the Wizard’s Apprentice start and Abandoned. I figure if it’s happening to the latter, it’s not a problem native to a specific scenario. No map mods active, and no mods at all that aren’t included in the launcher ever since Vermilion started giving me shit. Settings are fairly standard.

I can give you the modlist if you really think it’s relevant, but it’s pretty sparse compared to what I used to run with a handful of months ago. Nothing game-changing except Magiclysm and Aftershock.

Alright, I can work with that. I might have to come back for a modlist and exact settings if I can’t recreate the bug, but for now this is fine…

Sorry, I’m unable to recreate the bug, I need the modlist, the exact game version and the world settings for further testing.
I suspect the culprit to be a mod (or multiple) that add a lot of new locations. 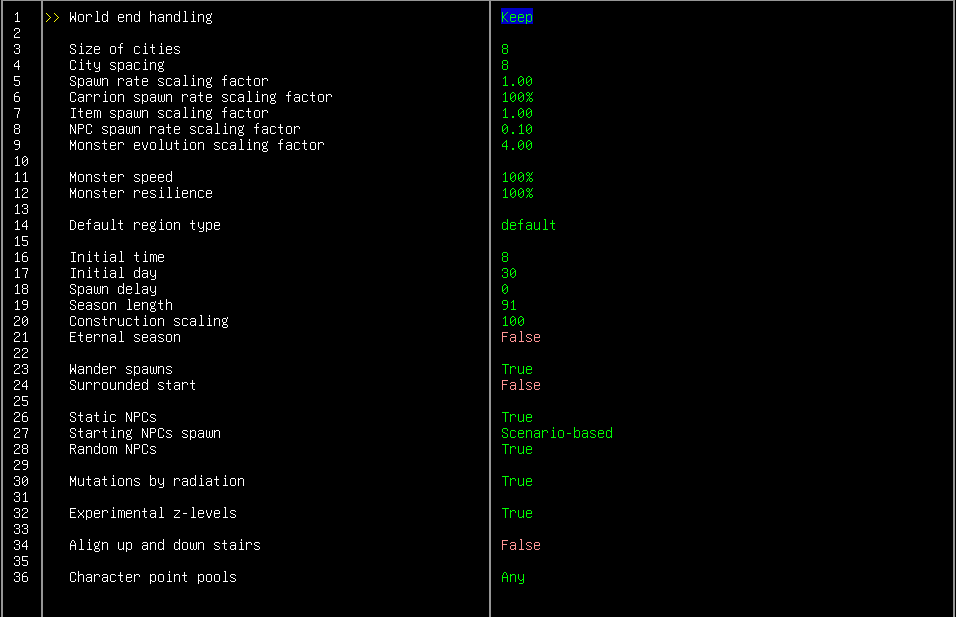 Hope you can figure it out, because I have no idea why this is suddenly happening without any error code or anything. It’s not crippling, since I can just reset the world over and over until it works, but it would be nice to see fixed.

Thank you for the mod list and screenshot of the settings.

A (very) short test later: The settings are the problem. I’ve run the test again, with your settings, Magiclysm and Aftersock active and nothing else and the first time it took a long time to generate the map, and the second time it failed.
I’ll test it thoroughly, after getting some sleep, but my bet would now be on the “City spacing” setting.

Just for fairness, I redid the first test (default mods, Challenge - Abandoned) with your settings. Now it failed 4/10 times. I imagine it only gets worse by each mod that adds new locations.

Edit:
Indeed. I just created 10 new cities & characters and 5 of them failed. I used all the default settings and only set the “City spacing” to 8. Not sure how I or anyone else can fix this other than… just don’t do that

If you set your city size too high, unique wilderness locations get crowded out. If your spacing is too high, there’s not enough city available for unique city locations to spawn. You already figured out the workaround, which is to repeatedly generate a world until the specific location you need gets spawned. It’s not a game breaker, but you’ll probably have to do extensive traveling to find certain locations.

I guess one way to guarantee a suitable location is to force spawn one in if none is found. It is possible in the debug menu, so it should also be possible at a game start.
I’m not sure if it would be appreciated to do so, though.
…I’ll leave a note and may look into it when I’m done with the other stuff I promised to others and myself…