Trampolines and Their Usefulness

I was taking apart a trampoline today and the whole time I couldn’t help but come up with ideas for the parts. There was a safety netting around the sides so besides the net itself there were plenty of extra metal pipes. Then the body has not just the pipes, but also the canvas tarp that could be used for many things, not just clothing but also shelter. Also plenty of springs all around the whole thing and the padding over the springs which could be used for an armor of sorts. I thought up an idea using the pipes and the canvas to make a hammock. Anyways I’m just going on and on at this point to ideas anyone? Questions? Anyone want to add trampolines to one in 500 houses or so? Afterthought Imagine the uses once Z Levels are in.

They would make a good escape route, being able to jump onto one and fly a good few tiles away in one turn… with a chance to hurt your legs of course.

I like it! Beside their useful part, something about escape a ravenous undead horde by jumping away from a trampoline made me laugh.

“uh oh they found me, better jump on the trampoline and escape over the fence. See you later suckers!”
… …CRASH!
…
“crap I broke my left leg”
*zombies then process to eat the now helpless player.

Parkour expert would let you jump further without chance of damage?

You’re all missing the most important part.
Morale bonus

Wait, I thought of something. Falling fight scenes when Z-levels are in.

MID-AIR KARATE ON A TRAMPOLINE!

True, bouncing on a trampoline chould give the player a morale bonus but attracts nearby zombies due to the noise it make. 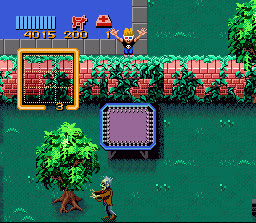 Yeah, this bring back so many fond memories. I first came across Zombies Ate My Neighbors in a friend’s computer and this, along with Warcraft 2, Red Alert and several old games was my childhood

Edit: And my dragons just hatched