Started playing again (over a year),here are my suggestions to improve default keybindings

After re-familiarizing with the game, here are my suggestions to improve potential new player experience:

I happen to use open and close A LOT. Truly common functions in my game play. I find mobs chasing my @$$ all over the place and I shakem by climbing into vehicles and closing the door behind me lol for one example.

I agree with you on that (i’m still in early Game when where it’s the most usefull strategy) ,which is why i said to change it to a standard game interaction (interact + direction).But opening doors in my experience is done with direction buttons, so i see no reason for it existence.Also closing doors is situational at best (animals/zombies vs houses/cars) and useless against middle/late game opponents (Hulk/endgame),it can be put on something like
( * ).While (mostly)crafting and construction is done constantly from cooking to weapons to tools you name it so an easy ( c ) instead of 2 buttons: shift(bottom edge of keyboard)+7(middle top of the keyboard).

Still no idea what you mean mate. I press o/c and any numerical pad press to do my business 0_o

Hmm…yeah. I do see your point about opening though. Not sure if I open anything. I have pressed the button before using directional. Maybe I’m just strange to do it that way lol

I always open with movement so its strange to have a dedicated open door button.

S is used to save the game, fairly common to use it that way as save is more common in most games then safemode, nice quick method to do so, your changing of the keys makes it take more presses to save the game, I guess just so people can bumble into safe mode trying to save a game and not know they did it and die. Even knowing about safemode takes reading up on the controls.

Changing read, and run fixes nothing except now new players having to look up how to read, or even knowing they can do it that way instead of multiple key presses to open inventory, select the book, and choose read that way.

Opening a curtained window, and interacting with it is different, changing open and close would add more key presses when doing so for the entire game, just for the sake of people not having to read as much to learn the controls at first.

Changing chat and craft I see nothing wrong with, but no benefit to it either, same issue for new people they wouldn’t know how to talk to NPCs, (and that can be deadly) with out reading about the controls

It is easy enough to change the keybindings yourself for your game. Personally anytime I start playing a new game I look over the keybindings to see if I want something different.

To me none of these changes would address the issue of new players not knowing all the controls with out looking them up, so why take the time to make the change? But others might like it, if you want to take the time, code it up and submit it on github, see how it is received.

S is used to save the game, fairly common to use it that way as save is more common in most games then safemode, nice quick method to do so, your changing of the keys makes it take more presses to save the game, I guess just so people can bumble into safe mode trying to save a game and not know they did it and die. Even knowing about safemode takes reading up on the controls.

default S Isn’t actually used to just save,its Save and Quit a.k.a. stop playing.Any other rouge-like (CoQ,Cogmind) or any other game for that matter uses Esc menu to exit the game,F5 used to save.And why is there more button presses?Esc->Up arrow-> Enter (additional quarry Y/N can be removed as it becomes redundant) is used everywhere while Shift+s->Shift+y?This is just a leftover from old times (Just like (Q) commit suicide,it should just be put into Esc menu and removed from keybindings) and removing it just gives more wiggle room for new functions for user himself to choose (i mean seriously,its easier to list unused buttons then used ones) a function to assign
Also Running should at least be put in introduction to movement in help menu
+my argument for changing R doesn’t work (it’s bugged 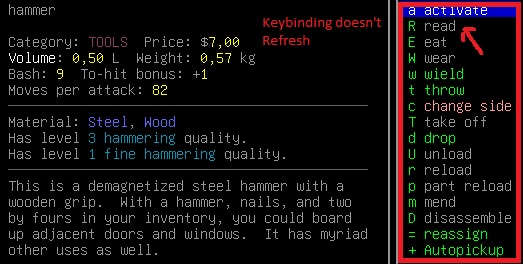 While changing craft to c just introduces players to crafting faster if they they try to experiment with the keyboard (while ability to Yell in a default NPS’less world is almost the most useless thing) and by the the time they need it (player has basic understanding of worldgen) they would already looked into keybindings.
I posted here first to get some critisizm and for holes in my logic which i don’t see

But opening doors in my experience is done with direction buttons

Doors, yes, but gates won’t open with direction buttons. You still need to use ‘o’ to open them.

What are these ‘gates’ you are talking about? Small wooden ones?Chain link ones? Something new I’m not familiar with?I’m intrigued…

Mostly the wooden gates in fences around houses.

Do they have any special use? I usualy climb over them or smash them for a firewood.

None that I know of, but I prefer to open them instead of climbing over.

If you are dragging a cart for looting, you have to (o)pen the wooden gate to get into the Pizza Parlor(or some food place I can’t remember the name)… also to get to the kitchen in the same building you have to open the counter’s gate. Sure you could smash it instead, but not so much if you don’t want to make any noise.

How do you assign these keys to those actions? I have wanted to do this for a long time, but can’t find a way to do it.

As a noob trying to get used to stuff, I’ve been wondering similar things.

(e) should do much more than it does. It should open and close doors and containers, for example, as said above.

I don’t know why ®ead is a command. Why can I not just (a)ctivate my reading material? It’s not like I plan to do anything else with my books. Similarly, why do I have to (E)at my food instead of just (a)ctivating it? I realize this might mean more context menus for some items that might have another activation, but it would be a lot more intuitive to have (e) be the general interaction command for the environment, and (a) be the general interaction command for the inventory.

I’m also not entirely sure why (&), (*), and (() are different menus. They feel like they should be a single menu with three major tabs, maybe under ©. Heck, the old commands could still be shortcuts to take you straight to the appropriate crafting submenu.

There are a bunch of similar overlapping commands but those ones really come to mind. I also agree that (esc) should have the commands to save and quit to free up (S).

Press (?) while you have the ‘actiion menu’ (shift + 5) open and it will open the menu to change key binds.

Thank you, NuG. I am now a very happy survivor.

No problem, a lot of screens have separate keybindings, so I found hitting ? on the different menus can be pretty helpful.