So I came across the "Research Facility" superstructure

I have a decent PC, but that place caused the game to freeze every turn for a few seconds. There must be literally thousands of monsters in that place, all trying to move every turn. It’s the giant lab with multiple above ground floors, added in by one of the more buildings mods (i think.)

Ah. . . I believe that’s actually a mainline building. I haven’t seen one yet, it’s a work in progress. Uh, if it’s this thing, anyway. They’d probably want to know about stuff freezing and all.

The Place is pretty cool and it mostly had low level monsters in it so I pretty much just trashes the place with a homewrecker I had on hand. It’s pretty overpowered a location though. You’ll have months worth of water just exploring half a floor let alone the whole thing. Sure saves on boiling or finding sustainable water with that many water bottles. Mostly of it is just one room repeated over and over inside though so wasn’t as exciting as I’d hoped, lots of good loot, mostly drinkables, some vending machine for calories. Great place for an early game character, don’t know if it’d be particularly useful outside of all the leather for a lategame one though.

There definitely aren’t thousands of monsters in it. A few dozen per floor max.

The loot is rebalanced now, I was using the old lab itemgroups which are terribly balanced by current standards and include all kinds of random crap. Now it uses actual lab loot that I had to make for it. Next up the room variation will be added.

In general, expect item spawns to start getting significantly buffed across the board though. The cataclysm was only a few days ago, the world shouldn’t look so picked over.

The only location I’ve encountered that caused really visible movement lag was some kind of hidden Fallout-style vault complex. That did in fact have several hundred active Zs in it - possibly over a thousand. Not to mention multilple chicken-walkers.

Don’t think that was mainline tho? I think it was part of an added locations mod.

I found it too, currently useing it as my base because of perfectly good resources (desert biome world)

In general, expect item spawns to start getting significantly buffed across the board though. The cataclysm was only a few days ago, the world shouldn’t look so picked over.

This part makes me worried, especially if this will be gradual process and not instant rebalance for everything in-game. If it was instant, at least there is always a possibility to lower the global item spawn rate scaling factor, but that’s complicated if there will be “current” and “rebalanced” structures next to each other.

Personally I’m playing with 0.4 item spawn and at this setting single research facility gives enough loot to boost early game character well into the late mid-game - difficult to find/craft tools, books, food and useful materials can be found there in quantities large enough to last for weeks, and it’s very easy to just grab it and run. How about some lab-like defenses guarding the entire facility? (like turrets, skitterbots and manhacks)

I’m not sure if that’s intended, but all vehicles found there also seem to always be in perfect condition.

Sorry dude, you play experimental, you get gradual. This isn’t something that can be done in a single change, it’s a huge amount of work. I can’t just quintuple spawns, rare items need to stay rare while common ones increase.

That said, the workshop in the research facility is already significantly rebalanced in a pr awaiting merge, and hardware stores and lumberyards are being brought up to match in another nearly finished one. 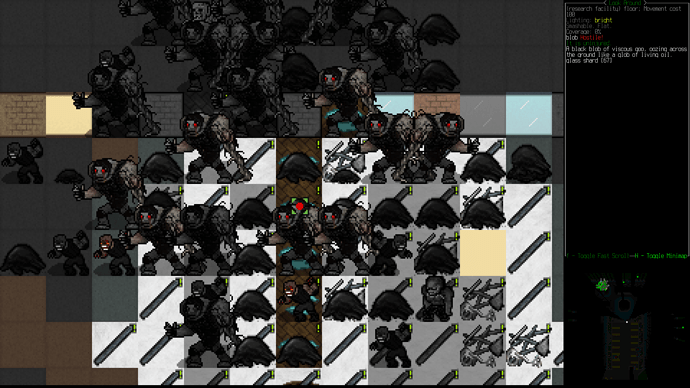 how much time has passed since from you started to when you found the research lab?, at most i find it full of zombie guards and scientist zombies (maybe a portal or two) but not hulks, and kevlar hulks even less…

Kevlar hulks unfortunately appear to spawn pretty early in the new labs. I don’t know if they’re intentionally placed there or if kevlar zombies evolve unusually quick. I only saw a couple at the research facility though back pre .E.

Sorry dude, you play experimental, you get gradual.

Just want to add: even if you play stable, you get gradual too:

Stable versions are just glorified translation milestones. They contain unfinished features and bugs despite your expectations.

Yes, that is exactly like this - there are game versions where are certain things are considered to be finished, polished and balanced, but that does not exactly mean these things won’t be changed in the future. Still stable versions are more stable than experImentals. What’s your point?

This topic was not about stability but about “balance”. Erk’ post implied stable versions don’t have some new/experimental features that are somewhat out of line/not fully implemented. I corrected that. That’s all.