Was watching Rycon Roleplays, and we saw a corpse not formerly a zed reanimated as a zed. Checking the notes on the updates, looks like monster corpses will reanimate now? Didn’t know that worked on NPCs. Awesome if that’s the case.

Yes they do https://github.com/CleverRaven/Cataclysm-DDA/pull/41322
Also thanks for the spoiler about Dusk latest episode ><

Makes me wonder if my necropolis of dead NPCs in coffins is going to be a pain to add another addition to the collection once the current ones inevitably disappoint me in some way.

Sorry about that, didn’t consider it a spoiler per se as it’s only one detail. Episode is still well worth the watch. I also edited the main comment to be much less spoilerific.

You…keep them…after they disappoint you?

I read somewhere in the lore that corpses that aren’t zombified jet don’t revive if they sustained major trauma. And it spicifically mentioned that this included the removel of major organs. So if you field dress a corpse does it revive or does it stay dead since this would be very handy for moving and storing large corpses without risking them reviving.

Sure, each new arrival gets a tour of past disappoints and I would hope that it sticks with them not to do what their predecessors did. So far there have been no repeats.

“This one charged head first into a horde of hulks.
This one decided they were acid proof for some reason.
This one drop their grenade.
And this one’s head just exploded.”

Same rules as zombies reviving. So if you mess up the body it won’t rise up again.

Huh, didn’t know that. That’s great, now I can kill that stealing NPC twice! Least until they tries to take my Mininuke in which case the mad lad/lass can have it.

NPC come back as regular Zombies no matter the NPC

Too bad. Imagine this guy as a zombie 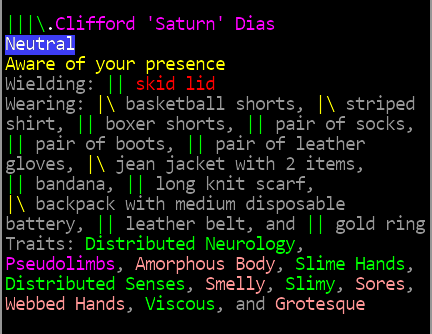 Maybe one day, but currently there’s no way to do that.

If you’re concerned that the previously deceased NPCs rise: As far as I know, a Zombie can only revive if it can stand on the tile the body’s on*, and it’s for some reason not possible to walk over a built coffin.
*This was not the case in earlier versions, but (based on what I’ve seen) it is the case now - at least from 0.E…
… I write this while staring at my multiple lockers and other storage tiles that I’ve filled to the brim with Zombie corpses, stored for… later use.

However, if you’re concerned about getting the NPCs back to your place before they turn… just throw them into a car’s trunk and drive wherever you store them (or drag them across the map, if it’s not that far) and it should be fine - I think. I did/do this a lot with unpulped corpses.

Good to know I won’t come back to a crypt of the walking dead.