Standard US Army gear for wear over body armor. It is very adjustable (activate to make fits?) and also very modular. Standard loadout should contain seven ammo magazines worth of ammo pouches, first aid kit, two canteen, canteen cup, and one grenade pouch. The first aid kit is intended for combat usage. I would probably differentiate it from regular gear. All of these things are of course modular. The standard “assault pack” (aka backpack) that is issued to soldiers also have the weave that allows molle gear to be attached to it. You also see this weave on a lot of purchasable civilian gear today. I don’t know if it’d be possible to code something like this to allow customization of some of the existing gear out there while making the various pouches as mods. I’ll see if I can link some pictures.

This is the one that was in use while I was in about five years ago.

This is the one that was in use when I joined.

Here is a good picture of standard issue gear. 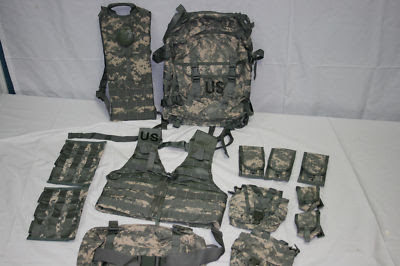