I just bought myself a +10 ring of speed, only to find it seems to have no effect on my character at all.

Am I missing something here, I have tried activating it, wielding it, swapping sides, with other clothing, without any clothing, but nothing seems to change?

Below is an image with ONLY the right equipped, as well as an image of my speed stats. 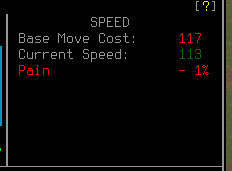 I’m starting to think speed buffs in general aren’t working in F-3, I’ve had this same issue when I used rollerskates/heelies/glide on ice. I can’t look at code rn but I assume these items just have an enchantment that increases your speed, so maybe SPEED is a dead value that was replaced in F-3? Just a thought.

I just tested the “Glide on Ice” spell, and it does seem to work fine.

Here I am wearing 2 pairs of “Slick Icy Coatings”, and my move cost drops from 106->66.
(my move speed also reflects this on smooth surfaces)

But perhaps the spell has been adjusted accordingly, and the ring has not (in F-3)?

UPDATE:
Here I am using a pair of roller blades, my move cost is reduces, but speed is unchanged.

I tested the haste spell, which gives me an insane amount of speed, but seems to do nothing to my actual movement speed?

After moving 1 tile with haste spell:

CONCLUSION?:
I am starting to think I am misunderstanding the “Speed” stat here…
Looking at the wiki, it does not do what I thought it does, both move cost and speed play a role in how quickly you move (in comparison to other creatures for example).
https://cddawiki.chezzo.com/cdda_wiki/index.php/Speed
I just tested the ring of speed +10 again, and it DOES change my relative speed against monsters.

For example, ive changed the speed stats of monsters so that the bee is only slightly faster than me without the ring of speed +10.

Then, I put the ring on, move one tile, and the bee is now as fast as me.

With the haste spell (400+ speed), the bee becomes “practically immobile” compared to my character.

Edit: Changed above post to show updates instead of posting more replies.