In the current experimental, it seems like there are two bugs with how infection from bites (“green” stage of it, specifically) is handled:

Well, that explains a lot. I was wondering why my character passed out so many times while recovering from an immediately treated infection.
I just assumed it’s the game’s normal way of punishing the player for letting an infection happen.

As someone who’s made it through some more or less nasty stuff in real life, this seems like an appropriate representation to me (for the “worst” stage, aside from death).
Though, maybe it’s going a bit… too far. A little less extreme values might be sufficient as well…

As someone who’s made it through some more or less nasty stuff in real life, this seems like an appropriate representation to me (for the “worst” stage, aside from death).
Though, maybe it’s going a bit… too far. A little less extreme values might be sufficient as well…

The problem is, in practice this often means you can die from dehydration because you can’t stay awake long enough to boil a pot of water.
This is neither very realistic (you don’t need to be awake for a pot of water atop a stove to be boiling), nor very good for gameplay (it becomes very non-interactive, game basically “plays itself” without allowing you to give any meaningful imput).

If you can open an issue on github, with the step to reproduce the behaviour and the parts of the code you think are invovled in it ( I suppose from your comment that you dug through the code) it would be helpfull.

I don’t currently have an active account on github.

My conclusions are based on multiple runs of infected starting scenario.
The pattern is rather clear: you take antibiotics, and if the infection is cured more than 8 hours into it (but before infection enters stage 3), penalties during recovery are higher than they used to be during actual infection.

A recent RBD live-stream challenge i did (Dwagon Hunter Z) had 6000 fatigue at day 2 of the ‘recovery’ stage. He found Antibiotics 90 minutes into the challenge but didn’t ‘cure’ the infection for another 2.5 days.

Oh, and the -203 temperature from the fatigue was fun also.

4 days after the infection went into recovery, doing nothing but eat/drink/sleep i was still at 4800 fatigue, non-stop exhausted, and passing out constantly while trying to boil water. I finally lost all patience and debug cured the exhaustion away.

This was incredibly frustrating, especially since the first attempt at this challenge had the character die from infection on day 4 despite having found and started taking Antibiotics 6 hours into the challenge. Having the recovery effects feel 100x worse than what you experienced while infected is…silly.

[…] you can die from dehydration because you can’t stay awake long enough to boil a pot of water.

Just drink it “raw” in an emergency situation like this. But yeah, I get what you mean.
Seeing @Vormithrax’s experience, I totally agree. This shouldn’t happen, at least not to that extent.

Just drink it “raw” in an emergency situation like this. But yeah, I get what you mean.

You can try drinking it “raw”, sure, but you will just get food poisoning and puke it out 9/10 times.

Well, it depends on the source and a few other things. There’s a 1 in 3 (33%) chance that water out of a toilet* will not give you food poisoning, a 66% chance for non-flowing water (like ponds), a 75% chance for non-flowing deep water, a 90% chance for flowing water (river) and a 95% for flowing deep water. But never 9/10, unless you’re drinking sewage (why?!). [Source: I checked the code]
*This gets calculated new every time you draw water out of a toilet.

You could use a funnel to circumvent that problem fully, although the new weather system makes it a lot harder to catch enough water.
You could also use one of the tips from a “survivor’s note”: “I put my toilet water into a gastank. Then I poured it into a glass cup. Then I drank it without vomiting my insides back into the toilet.”
Or abuse some of the game mechanics by drinking something right before the clock turns to xx:30:00 or xx:00:00, as that’s the time (for now) you spontaneously digest it (actually all 5 minutes, but I wouldn’t trust it fully), although I do see it as a bad sign to “fight” a bug by (ab)using the games own code.
Also, if you pour water into a container that contains already known “good” water (test it; if you don’t get food poisoning from your first drink out of that container, then it’s good), it will magically remove any poison - unless that was changed (fixed) at some point.

Yeah, raw water isn’t that “bad”, usually. And, as you said, you don’t vomit every time you get food poisoning.
There’s only one situation when all of that stuff above doesn’t work and you’ll need to cook your water: when it’s frozen

Technically, you are right.
And that would all be possible if you had the time to drink one cup at a time and digest it.
However, when you have gazzilion fatigue, you will be passed out in about 10 minutes.
And on top of that you still have “recovering from infection”. Which makes it extremely likely you will puke out even “safe” food/drinks.
In this situation you have to drink 5+ cups at a time to offset the thirst you accumulate while passes out.
And that’s where 1/3 chance of food poisoning quickly turns into 9/10.

Is the “recovery” process meant to kill you then?

This is the state of my character now:- 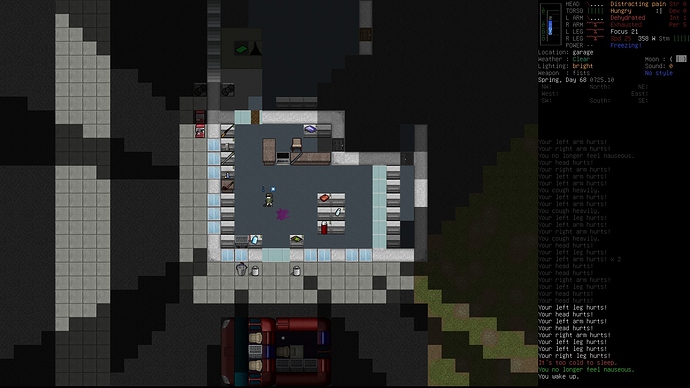 They survived an infection for a couple of days, went into recovery with basically full health stats, and now they’re like this.

Been eating fruit and drinking clean/mineral water, but constantly throwing up.

I assume all the damage is from the broken cold/fatigue mechanics. I only survived a week of it by having a fairly large stockpile of food/water ready and staying in bed with a blanket to regulate the ridiculous cold temperatures. That’s when i used debug to wish away the 4800 fatigue it would have taken multiple MORE weeks to get rid of.

I had a common cold too, which might have added to it, but no damage from enemies or anything apart from being “cold”.
I only made it about a day/day and a half before dying.

Can someone with an active github account please cross-link this discussion into this issue there so that information is a bit more cross-referenced:

After heavily infected/antibiotic recovery, player is exhausted after 5 continuous days of full sleep

Describe the bug Character is still exhausted despite 5 days of sleeping after recovering from an infection. Character was bitten in the right...

Also, there’s an other thread about this here, talking about the infection/-recovery issue:

Design of Fatigue and Hunger Fundamentally Flawed The Garage

Hi. I noticed there is some discussion already on the subject, but since my perspective on some of the issues is not identical and they have not been addressed yet, I thought to open up a separate topic. Last night a played the infected scenario. While antibiotics are perhaps a little too rare, the first part i.e. getting the infection cured worked out just fine several times. It was actually pretty fun hunting for the drug. However, the recovery period makes no sense whatsoever. After sleepin…

Maybe cross-link that as well, while on it?