How do I build a perimeter wall around my faction camp?

I have dug a trench along three sides with the “Construct map fortifications” camp mission, and now I’d like to build a palisade wall in it, but I cannot figure out how to do this. The mission description says the trench “is meant to be the foundation for a picket or palisade”, which sounds like it should be possible?

Version 1 of the field base camp hub does include the digging of trenches, as you describe, but does not contain any blueprint for developing it further.

I haven’t tried it, but it should be possible to use the “manual” “blueprint” construction functionality to “paint” a palisade over a trench and then order your companions to work on any blueprint constructions they find.

Ok, thanks. I created a 3x3 custom loot zone in the vicinity of the trench and filled it with logs and wires. On top of it I created an overlapping Basecamp: Storage zone. I added a blueprint zone for palisade wall on four of the trench tiles, less than 10 tiles from the stockpile, equipped one of my NPCs with an entrenching tool and asked him to “do any construction work”, but he refuses to start construction. He has the requisite skills. Could it be that the trench is too far away from the camp?

Edit: I tried moving the blueprint zone closer to an existing camp expansion (see screengrab), but my NPC still refuses to build. 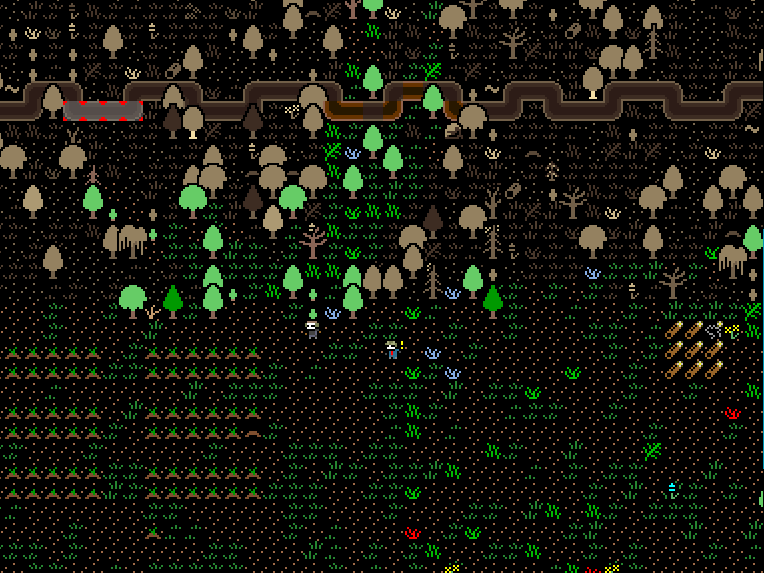 I’m guessing that the construction has to take place within the reality bubble, i.e. at most 60 tiles away from the PC, at least when the job is taken, probably when works starts, and maybe while work is underway, although I think the last one isn’t the case (it is for sorting, but that’s a different task).

The image shows the remote trenches, not the ones inherent in the field hub version 1 (which I thought you referred to). I think you have to be within the reality bubble at least to start the job.

Also note that these “defenses” are completely useless for the time being, as enemies outside of the reality bubble don’t move physically on the terrain, but rather floats around on the overmap, only spawning once their location is inside the reality bubble. Thus, they can spawn on the inside of “defensive” walls.

I think you have to be within the reality bubble at least to start the job.

As you can see in the screengrab I’m less than 20 tiles away from the blueprint zone when giving the order.

But I still want to build a wall; partly for the flavour, but also because I have well over a thousand logs I don’t know what to do with (I’m building my camp in the middle of a forest).

One thing I’d try is to see is if it is valid for the PC to try to construct a palisade tile.

Logs can be used for charcoal (for smoking/dehydration, as well as running workshop furniture). It can also be used to build the buildings in the camp. Otherwise, I’d just place them in a stockpile off to the side for future use.

One thing I’d try is to see is if it is valid for the PC to try to construct a palisade tile.

Good thinking. It isn’t, for some reason. The required resources (3x logs, 6x wires) show as missing (red) even though the stockpile is nearby and within my LoS: 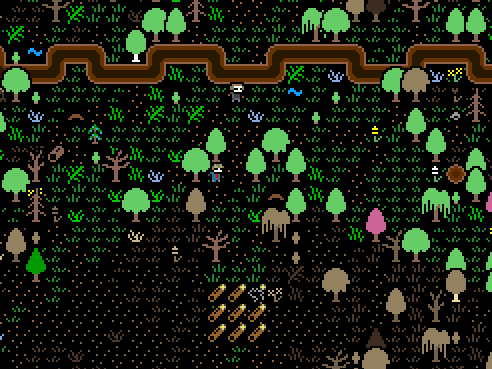 I feel that I’m probably missing something obvious and simple.

Edit: Of course, the resources need to be closer when PC is constructing! Doh! If I drag the materials closer I can indeed build a palisade wall in the trench. But the NPCs should pick from the stockpile even if further away, right? I’m sure they did this for other constructions.

I get bored without it.

Logs can be used for charcoal (for smoking/dehydration, as well as running workshop furniture).

Yeah, I’ve made tons of charcoal already but I prefer electricity; most of my camp buildings have solar panels on the roof, and use electric appliances for most jobs.

It can also be used to build the buildings in the camp.

I’ve got the central camp fully built, and the workshop too. The canteen only has one wall left (I think), livestock area has two stables, farm has processing shack. I guess garage and possibly storage are the remaining expansions I plan to build, and I’ll probably use steel for the garage, maybe even for both of them (there’s a compactor unit a short drive away, so steel plate is pretty easy to get).

Otherwise, I’d just place them in a stockpile off to the side for future use.

This is what I’ve done. Still like the idea of having a wall though…

As you noted, the PC crafting resource range is 6 tiles.

I do believe companion blueprint construction can take things from further away than PC crafting, but it might be that a basecamp storage zone doesn’t work as a source if it isn’t in a base camp (I’m guessing here).

Ah, but I have other basecamp storage zones within the camp containing more logs and wires.

Yes, but the one you try to use for the wall out in the forest is presumably close to the wall. The zones within camps far away certainly won’t count out there. Zones aren’t even loaded into the game unless they’re in the reality bubble (there’s a toggle where you can find which overmap tiles they are in, but their contents won’t be loaded anyway).

I’d try the 6 tile range with the companion order and then work my way further away from there to get a feel for the range possible.

I’d try the 6 tile range with the companion order and then work my way further away from there to get a feel for the range possible.

You’re right - the range appears to be the same as for PC crafting/construction: 6 tiles. This complicates perimeter wall building considerably, since by definition these tend to be quite long. I would have to set up a stockpile every ~12 tiles along the length of the wall, which is a dozen overmap tiles long. That’s… a lot of stockpiles.

A pain, but at least you’re able to proceed

I have an alternative plan I want to try first; clear a route along the trench wide enough for my flatbed truck, fill it with logs (and wires) and move the truck along as construction progresses. Chopping down all those trees will take some time, but I was planning to do this anyway to make base intruders easier to spot (and kill with turrets).