Some things that should be influenced by character height currently aren’t. The most obvious that come to mind are someone’s stomach capacity and the number of calories they can store before becoming overweight. This is important since someone’s height does play a role in your weight calculations. Since this is a factor in your BMR calculations this means that larger characters need more food but are only able to consume as much as smaller characters and only store as many calories making it more difficult to maintain weight and avoid starvation.

Didn’t know it effected that in game. No wonder it’s such a pain managing these needs. Bigger stomach for sure please dear god. These characters have some serious baby stomachs and what fills and how much seems very inconsistent.

https://github.com/CleverRaven/Cataclysm-DDA/pull/45106 should fix most of the weird things that are unexpectedly super filling, I believe.

Adding a stomach size modifier due to height would be appropriate if we’re also modifying BMR.

Should help with a lot which is good. Is jerky covered by that? It’s a bit odd how explosive a thing of jerky is on the stomach ingame. It spontaneously slaps me to engorged very often.

Jerky appears to be 90g per 250mL, so it should be about 1/3 as filling with this change. I’ll check in a minute when I’ve compiled it on my home computer.

Pemmican maybe the only one I’ve found so far that won’t be significantly affected.

Very good to hear! Quite the interesting solution to the problem too. 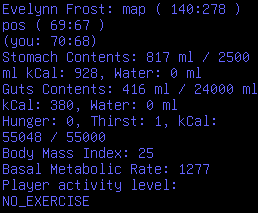 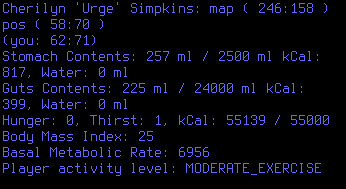 Deluxe sandwich now, I need to figure out why this has a higher volume though:

You might also want to add a modifier to the number of calories someone can store based on their height since currently taller characters lose weight quicker do to their higher BMR but they are only able to store as many calories as smaller characters. This is especially ridiculous when you bring mutations into the mix and realise that a huge ursine mutant with fat deposits as a mutation and a +150kg weight can only store a measly 55000 calories before being consider overweight. This is just as much as a 1,45-meter tall character can store before they are considered overweight.