What are the methods for healing wounds?

Never had to worry about it before, but the new changes to healing rates is making me change my bandages + sleep strat.

You dont have much choice untill lategame.
Bandages, disinfectant, lots of sleep. Sleeping syroup can be good healing tool because with help of it you can sleep more. Eating healthly food can increase your healing rate a bit. If you find some books that increase your firstaid skill, it wil boost power of your healing items.

Ah, so basically my current system, but with disinfectand thrown in for now?

Talking of bionics, i’m doing a failed cyborg start and this is the first time i’ve messed with autodocs. What player skills do I need before I start messing with autodocs?

Depends on the difficulty of CBM you try to mess with. For some easy ones you can get away with arround 4 in first aid, electrocins and mechanics. 6 for medium ones. And to have ~80% chance of success with most advanced bionics you want 13 electonics, 8 in first aid and 11 in mechanics. Additional int can help, but its hard to get boos to int from good mod and stimulants dont give it anymore.

That values for manual uninstalls or for autodocs?

I wouldn’t have thought autodocs would need that much reliance on player skills. Shady basement autodoc quality isn’t as good as one in a hospital.

Right now every autodoc has the same quality.
If you have manual instalation mod, then your chance of success is exactly the same for malual instal as for autodoc instal. Only difference is if you have safe autodoc mod enabled, in that case you dont need any skills to use autodoc.

There is also a mod by anothersimularcrum called EZ-Mode Medical which greatly increases effectiveness of all healing items which i honestly cannot play without, it is definitely worth getting if you find the current healing rates tedious

If you play with Magiclysm and find Introduction to The Divine (spellbook) it has Cure lesser wounds which is amazing. I don’t think it does anything for infections or bleeding, but I do think it affects broken limbs.

Or course I play with nearly double spawn rates so I wouldn’t count on finding it easily, but looting multiple book stores should net you ONE out of 10 looted stores at least.

Work on increasing your first aid skill and like SirPendrak said keep your health stat high, one of the easier ways to do that is swapping out drinking water for pine needle tea. It’s surprising how fast you heal with decent bandaging/antiseptic and a +10 health stat.

There are also the very fast healer and regeneration traits you can pick up if you decided to go the mutagen route that will bump up your healing substantially.

Edit:
I had the chance to show a good example of what high first aid and a high health stat can do to help with healing so I thought I’d share: 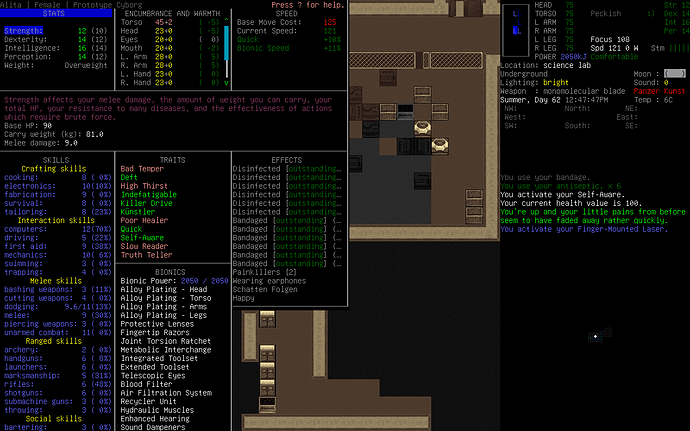 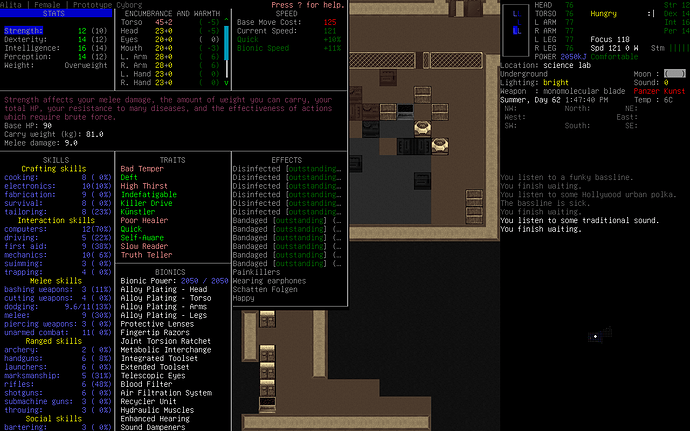 Now this is a fairly extreme version, getting 9 in first aid takes quite a bit of work and you need the Leukocyte Breeder System to get yourself up to 100 health consistantly but you can see my survivor is actively healing even while awake after passing a single hour of time.

And 12 hours and a short nap later: 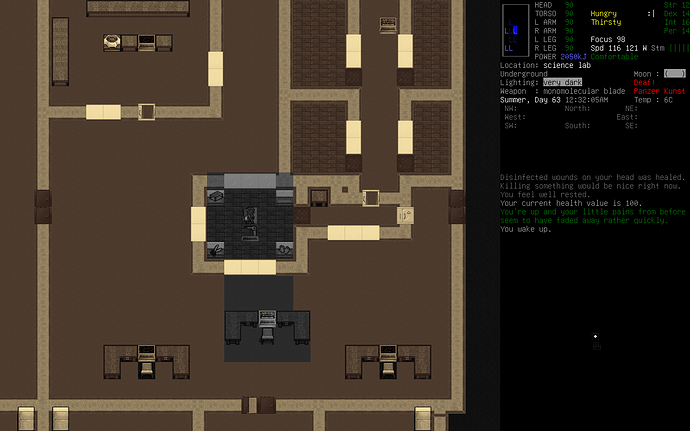 Crazykid is right. I usually take slow healer on my characters and invest a point in first aid. Being able to easily bandage yourself at least average quality while being at 10 health is stellar.

I usually survive off the land though and eating healthier might be more difficult if your character is deep in the city surviving on potato chips, candy, and ketchup.

Disinfect and Bandage maintenance, I use poor healer on most of my runs, it makes serious injuries a lot more of a problem. Breaking limbs is always bad news of course lol.

Deep wounds should definitely take some time to heal, would be intereting if when you get wounds that bleed they can be small cuts, to deep lacerations, requiring stitches to heal more effectively… Just a thought

Then your character is going to get fat and diabetes lol

Ah, so basically my current system, but with disinfectand thrown in for now?

What player skills do I need before I start messing with autodocs?

It’s your choise really… If you want to take a look at the background calculations, go check out the wiki, but in short:
For the autodoc you’ll need first aid, computers and electronics skills, and for manual installation (if you have the mod active) it’s electronics, first aid, and mechanics.
You’ll make use of them in that order. You’ll also profit from high intelligence.

Uninstallation uses the same skills in the same order.
If you fail the uninstallation, there’s also a formula to define how hard you failed. Since it’s not on the wiki, here is my (maybe wrong) extract from the game files:

“Base_Difficulty” is Bionic specific and must be checked in the bionics.json file inside of the data/json/items folder of your game.
“Chance of Success” is the % value shown in the install menu, subtracted from 100.
“Adjusted Skill” is, as written in the wiki (for the autodoc… if you use the manual installation mod, use the skills mentioned above instead);

So yeah, to make it safe, it needs mid- to lategame values. But if you want to gamble… As long as you got a base health over 80 and you’re fully healed up, you shouldn’t die (as a prototype cyborg, it’s probably not a good idea to play that risk, as some preinstalled (failed) cbms can cause damage over time)… I can’t guarantee it though.

Edit 30.11.2019: For those who don’t like to calculate if they run a risk of dealing high damage to themself: Just stay below 29% “FAILURE CHANCE” at an autodoc and you’ll should be fine (however, be aware of possible calculation errors and changes to the game).

Why I Hate Bionics
Do I actually need an operator when using an autodoc?
What is the recommended skills for uninstalling bionics without a profession?