1 - When creating a new world and new character, the game will crash upon entering the world sometimes. I do bad day starts which often fail and delete world upon death so, I , cough sometimes see a lot of world gen before I get rolling. I’d say about half the time the game crashes when kicking off now. Nothing else about how I’m playing is different. I redid my character preset since I’ve had that crash me before in the past (when trait system changes happen). Still crashing randomly. Game is stable once you actually get a good non crash start. I don’t see any json or other error msg - just as soon as I confirm my character and would normally transition to the game world, it CTDs.

2 - After adding a note to the map there’s a blank/ghost area where the note entry box was. Kinda hoses the map. Closing and re-opening the map clears it (since the whole map gets redrawn, I guess).

Win 7 64, latest experimental for tiles, noticed this for the past day or two so it’s been a few builds now.

thought i was post Here, sense its titled for it, but, my game crashed, twice now. Both while im in a lab.

First time, i failed to get the crash notes. This time, i have This 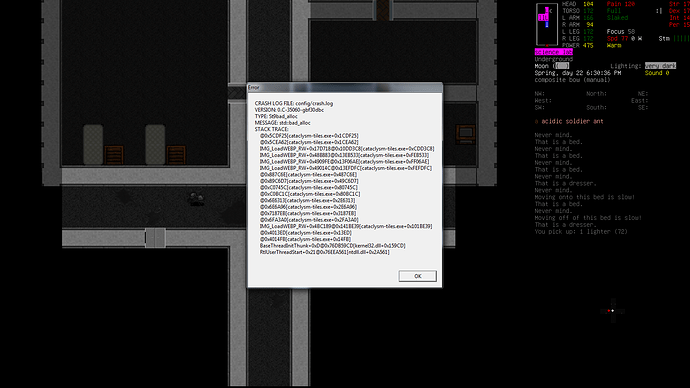 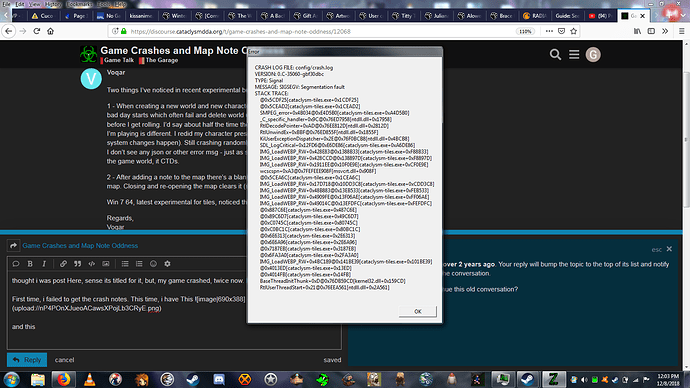 Can someone who can make sense of this gobblegook find out why my game keps crashing in the lab? I want this Stuff, dangit.

Problem with game crashing in a lab