This mod adds three new mutation branches: Crab, Snake and Rabbit, with some very minor changes to existing ones. Their respective mutagens and serums spawn in labs, and recipies can be learned from books that are already in the core game. They should be fairly balanced and tresholds are quite easy to reach (which is an issue common among other mutations mods). However, I’m always interested in your feedback.

DOWNLOAD HERE
To install, simply unzip and put the folder into /Data/Mods directory. Compatible with the experimental build (last checked #8505).

I’m surprised no one sent you my way. I’ve been working on altering Mutations and Mutation Trees.

Indeed. Now we need to track down the betrayers.

That being said these mutations actually look interesting. Kinda nice to see another ruminant type animal, and the exact opposite of the bovine tree basically.

Also snakes don’t have useless stumps… their entire body is just vertebraes and ribs. So the description for the snake mutation sounds funny… “Your legs degrade into useless stumps” yeah… weird. 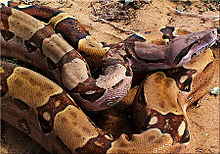 Boinae Calabariinae Candoiinae[a] Erycinae Sanziniinae The Boidae (Common names: boas, boids) are a family of nonvenomous snakes primarily found in the Americas, although also existing in Africa, Madagascar, Europe, Asia, and some Pacific Islands. Relatively primitive snakes, adults are medium to large in size, with females usually larger than the males. Five subfamilies, comprising 12 genera and 49 species, are currently recognized. Like the pythons, boas have elongated supratemporal bones....

“Both families share a number of primitive characteristics. Nearly all have a relatively rigid lower jaw with a coronoid element, as well as a vestigial pelvic girdle with hind limbs that are partially visible as a pair of spurs, one on either side of the vent.”

Something you might find interesting about snakes and legs.

Also snakes don’t have useless stumps… their entire body is just vertebraes and ribs. So the description for the snake mutation sounds funny… “Your legs degrade into useless stumps” yeah… weird.

It’s more like a ‘leggy snek’. It’s hard to describe how I imagined snake mutants, so I’ll use a picture. Something like this:

https://i.imgur.com/FisKCza.png
Art by dragonpunk
In my opinion, design like this is the one that makes the most sense in the current bodyparts system. Removing bodyparts isn’t possible, and just completely ignoring the fact that you have no legs (if you are a true snek) while they can still take damage is silly.
It’s weird, but mutagens aren’t perfect and using them often results in some body horror.

I’m surprised no one sent you my way. I’ve been working on altering Mutations and Mutation Trees.

I saw your thread, and it seems like a lot of C++ code would be needed, which I can’t do yet. My aim was only to add new branches with unique playstyles, and to not change existing branches too much. If you want to add support to my mod, feel free to do so, however I don’t think my mod is ready to be mainlined yet, mostly because it’s purely in json, and some of the features I had planned would require some things jsonized or hardcoded in the core game. I’d also want to get some feedback first.

I still have Chameleon branch mostly done, but I have problems with making it actually good without C++. Many existing negative mutations fit it perfectly (for example Fragile, Extremely Ponderous), but there are no major positive mutations suitable for this branch. The only thing I could do to make it viable is adding a ton of perception, but that’s pretty boring.
I have a bunch of really cool ideas for Frog branch, but it would require even more jsonized/hardcoded stuff (leaping, long reach attacks, spitting acid etc.).

Okay you got me… lizard snakes are cute. +1 Lizard Snakes!

Though still not useless stumps. So you’d needs to change the description anyways. Something along the lines of short scaly legs… lizard legs?

Kinda curious…why is Absent Minded an rabbit exclusive mutation? Compared to reptiles, insects, and slimes, are rabbits really so dumb?

The only thing I can think of is that it is a reference to “Absent-Minded Mr. Rabbit.” Other than that, I don’t know about reptiles, but insects tend to operate on stimulus-response or due to more complex reaction-chains. Spiders, for example, in the 1974 skylab experiment, showed an awareness that their environment isn’t like their previous biome and, over a few days, adapted in iterations.

Slimes, at least in Cataclysm, both have a lot of mutagenic properties that they seem to be able to call upon in relation to their environment (see swimmer zombies being much more adapted to aquatic movement) and, if masters are any indication, capable of remembering and planning for things.

A lot of domesticated animals, by contrast, lose a lot of their adaptive instinct and are instead entirely reliant on external support to react to their world. I’d imagine bunnies sort of are in that gray area, since there are plenty of wild (it feels weird to call a rabbit feral) rabbits and plenty of pet rabbits.

Some rabbits can be as smart as cats, it’s just that most domestic varieties of rabbit are kinda dumb since they were essentially bred as easy to keep livestock with large litters and short generation sizes. So it would be like saying all birds are stupid because chickens are too dumb to live. I assume absent minded might have to do with the fact that rabbits get distracted quite easily since they have incredibly short attention spans and get bored very easily.

As for reptiles most are smarter than we give them credit for, but their brains are arranged much differently to a mammalian brain and as such their process differs.

More mutations is always good. Going to have to give it a try, particularly for the crab.

Wish I’d seen this before

I started my new character

Maybe on the next one

You could edit the save file for the world to add the mod in. It mostly is harmless to add mods, its just troublesome to remove mods

Link’s dead, does the mod not work anymore or something?

Apologies if I’ve revived a long-dead topic, just enjoyed this mod and found it via search.

I think the mod would work, the problem would be to get the file again. I hope someone gives you a copy or that the author comes back

Here’s a copy of the mod that I have