Hi guys! I’ve been tweaking the move_cost code to account for the holed rotated vehicles ( I know Kevin wants to cover the holes with parts but man… i tried

).
Anyways, so far diagonal tiles in general aren’t connected at all, should it be kept that way? 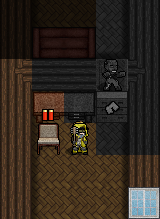 Our zombie friend can easily get in the room moving SW without much problem even though it might look like it shouldn’t.
Should the drawer completely block the door, be an obstacle or just be ignored?
What if it is a wall? Why are walls not diagonally connected ._. ?

I say with the drawers you can move as I see them as chest height, so you can climb over them.

Something like a bookcase or fridge on the other hand, no

The game calls it a “dresser” ( had to check ha), I don’t know the difference

In any case it’s coded to block movement, if it where chest height it would slow you down like tables and chairs do.
There’s no in-game info on furniture size but there’s some code somewhere handling height and some “tile density” thing ( I think) used to manage coverage and other mysterious stuff but not for movement.

Same thing aint they? Someone will tell us the difference soon.

I’m saying chest height as you can see over drawers (dressers) in the game where a bookcase blocks vision.

Some dressers have mirrors on them, some are just drawers. Game description has no mention of mirrors or haints at it with the ingredients!

But that’s getting away from your original question. To which I say, no diagonal movement if the objects wouldn’t ally the room

At the very least a movement penalty should be applied. Walking around a table out in the open is easier than squeezing between a doorframe and said table.
With bulky enough items like a fridge, bookcase, or particularly large dresser, movement past the doorway should be impossible. Like a makeshift barricade. You should be able to shove furniture up to but not into a doorway in order to barricade it.

Case is not even a wall will block movement or light. Diagonal tiles aren’t considered adjacent, but in theory all neighboring tiles should be at the same distance… which I think is weird.

Dresser’s json says it’s transparent and blocks movement, so how it looks like is pretty much to our imagination

Rumor says that lighting is being reworked so I’m not touching that for now.

It’s kind of a sensible topic for walls since diagonal stuff looks off and tweaking the graphics to appear connected is probably troublesome. But having a working furniture barricade seems fun to have.

That’s why I like the ascii, or whatever it is, style. The visuals are based on your imagination.

With the door example. would a piece of furniture be up against the door frame if on an adjacent tile.
I’ve just thought that maybe a doors tile area includes room for the door to swing open?

IMO, if it blocks your view, block the door, if it doesnt then just an obstacle

hmmm that’s a good point…
Maybe furniture should be allowed IN the door’s tile, or window or whatever… it’ll still look weird somewhat but make sense, and a wall in front of a door is like some very awkward column haha.
It’s likely harder to code though.

The problem seems to be an issue of perspective (identifying tiles is easier when they are viewed from a top down 45degree angle or straight top down) shape/length (Diagonal objects would make the overall size different, and harder to identify) as well as filler (adding additional tiles to make up for diagonals in vehicles, which adds to the overall area of the vehicle)
I don’t see this having a cure-all for it. We’re playing a game based on squares. Either you allow diagonal travel, or don’t. Personally, I like diagonal travel more than I’d like the alternative.

It’s not getting rid of diagonal movement, it’s being able to diagonally move between two objects in the game when in real life you wouldn’t be able to without at least moving an object first.

From a vehicle building prespective It might be nice not being able to move through diagonal spaces, I end up having to add 2 tiles width and 2 tiles length to a lot of vehicles I build since double thick walls are required to be protected when travelling/parking on a diagonal.
On the other hand I’d probably still have to add an extra tile in width to be able to move through a vehicle on a diagonal if it changed so it might not relly help all that much, it could also mess up a lot of generated buildings since they sometimes end up with weird door placement. You’d also have to change how some other mechanics work, like digging through walls and such.
It’s always felt a bit unintuative but you get used to it I guess.

I spotted a good example: 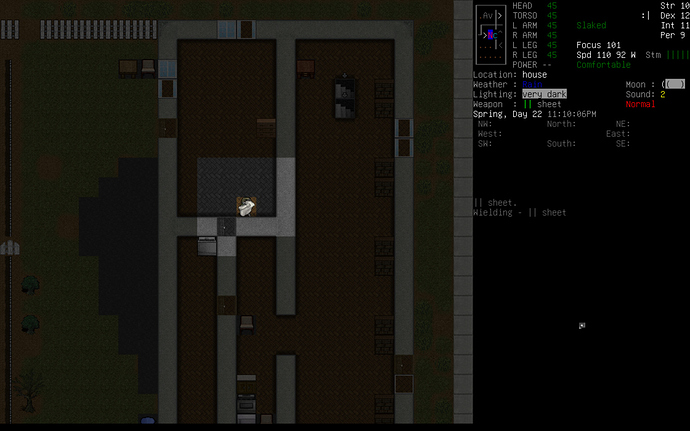 That’s some weird door! heh in any case I’ll PR the cars stuff first and work on this later.
Don’t worry about the width! it behaves as it should and vehicles are handled specially to be consistent with their design. Still need to work in lighting and ranged attacks.

Like I said, it would be nice. Being able to do a nice spacey 5 tile wide vehicle without risking being dragged out by a grabber while driving would be really good.

As far as that door placement wouldn’t it be possible to easily change it so you do a wall check on the x and y axis before it places? Why hasn’t this been done yet?

There’s no difference between diagonal and orthoganal movement (except distance travelled if circular distances are on).

That’s not up for discussion.

The tiles are representative of the contents, they aren’t exact depictions of the contents. In other words, the world isn’t made up of cubes that are either totally empty or totally full.

As far as that door placement wouldn’t it be possible to easily change it so you do a wall check on the x and y axis before it places? Why hasn’t this been done yet?

I have no idea how that’s generated lol, I guess it’s doable… maybe it’s not that likely to happen for anyone to care.

There’s no difference between diagonal and orthoganal movement (except distance travelled if circular distances are on).

That’s not up for discussion.

The tiles are representative of the contents, they aren’t exact depictions of the contents. In other words, the world isn’t made up of cubes that are either totally empty or totally full.

Exactly! because they aren’t is why I’m discussing it. I’m not saying movements should be different, what I say is, if they aren’t why content (ie. terrain, walls, furniture,etc.) is connected orthogonally but not diagonally and maybe it should… totally forgot about circular distances btw.

Pretty much because it’s trivially done with the checks i’m adding honestly.

Well, while his statement works for things like walls, doesn’t exactly explain why zombies ‘teleport’ inside of my diagonal vehicle. Probably would make sense to have certain places impassable diagonally like vehicles.