Anyone have any ideas? Or what am I doing wrong? Thanks.

Plutonium cells are like ‘emergency switches’, in my opinion…
Well, atleast you recharged your storage batteries that quickly

Each unit of plutonium is supposed to provide 100 battery charge equivalents. You had roughly 280,000 battery charges worth of storage batteries to refill, so there’s a bug that they’re twice as good as they should be.

Hmm. So minireactors are only good for charging batteries. I thought you could run a vehicle using only a minireactor. Plutonium cells are rare so feel free to push that bug fix to the very end of the ‘to-fix’ queue

Thanks for the clarification.

Here I thought they were burning too fast. I was always confused at how fast my reactor died on me. So they are intended to run out even faster? Twice as? Holy crap.

Each unit of plutonium is supposed to provide 100 battery charge equivalents. You had roughly 280,000 battery charges worth of storage batteries to refill, so there’s a bug that they’re twice as good as they should be.

Heh. As long as we’re being sticklers for reality: per unit mass, plutonium isn’t 100 times as energy dense as a lithium ion battery or even 50000 times… It’s got about 10 MILLION times the energy density. 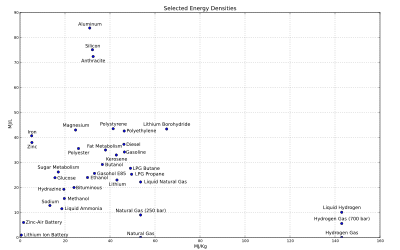 The following is a list of the thermal energy densities (that is to say: the amount of heat energy that can be extracted) of commonly used or well-known energy storage materials; it doesn't include uncommon or experimental materials. Note that this list does not consider the mass of reactants commonly available such as the oxygen required for combustion or the energy efficiency in use. An extended version of this table is found at Energy density#Extended Reference Table. Major reference = . The...

Not that I think plutonium cells should provide anything like that in the game - but even if you assume that a plutonium cell is mostly shielding, they’d still be representing orders of magnitude more power than a battery cell.

One other aside is that any sort of real plutonium based power source is going to have a fuel lifetime of months at a minimum - generally years. If you were to try extract energy from it much faster than that, you’d turn your containment system to slag or trigger a criticality. Generally speaking they’d tend to make more sense as a reliable long term, medium draw power source.

Given the technology of CDDA, batteries allow instantaneous draw off a large capacity anyway, so having an exceedingly fast power generation source like the way mini-reactors work right now isn’t actually very useful, unless you’re trying to run a MBT with an entire array of fusion guns and lasers on it.

Now that’s a lot more what I expected from these reactors, not a quick poof and done.

We really don’t know what plutonium cells and mini-reactors are, because they don’t work like any real world nuclear power device. They’re too energetic for RTGs and too small and not energetic enough for fission or fusion reactors.

TL;DR Kevin wants to replace the existing minireactor with something that will provide power perpetually (or near enough) slowly but be unrefillable.

Yeah, an RTG would be a very low draw power system (a few hundred watts or so?) with a useful lifetime measured in decades.

Given the term ‘reactor’ we should probably assume that there is actually chain reaction fission going on in the mini-reactor, though of course how they achieve that efficiently in such a small volume with such small amounts of fuel is an open question. Sounds like an engineering challenge, but probably a simpler one than designing CBMs.

Now that sounds like a great change. Good stuff to hear!