i realize that someone was working on changing up how to make welding fuel, and so they changed acetylene gas creation to require its own dedicated ‘machine’, but has the machine been placed into any building type yet?

… perhaps a factory/lab/outskirts/middle-of-nowhere garage style building with both a machine for creating acetylene and oxygen compressed tanks?

The question is, where are you getting your calcium carbide or your methane supply to react into acetylene?

I’m not saying it’s impossible, but I don’t know where to source them, so I can’t suggest anything.

its kind of a tricky situation isn’t it, we know these things exist, but to replicate them as closely as possible is difficult because we dont know how they exist as compared to normal society… like, i’d suggest you could find calcium carbide or methane at a hardware store, but considering calcium carbide is dangerous in untrained hands that’s unlikely in real world terms.

and searching it up on google will get me put on a watch list… besides that, it’ll all be online stores.

giving you the option to ‘create it from scratch’ potentially overcomplicates the process even further.

perhaps just introducing calcium carbide as a potential loot item inside hardware/drug stores is fine, methane is used as a ‘natural gas’ for cars, so perhaps dropping that in garages? and the building i suggested would just have all of these ingredients and the machines to make acetylene gas, assuming it isn’t destroyed by zombies first… it’d make sense to find a limited amount of both finished acetylene gas and materials to make it.

I don’t really see many people doing garage acetylene manufacturing in the present day as is, and as you said, hardware stores don’t tend to stock dangerous goods like that. I’d imagine you’d find an actual plant producing them in the industrial section of a city, or a warehouse full of the goods that were shipped in. There’s no reason to shove every precursor good into the place when reality offers alternative options that would make sense to be implemented at some point. And more Industrial style building plots would be a great thing to introduce, rather than trying to put everything in a shop.

Just in my city up in Canada, we have a couple Industrial Gas suppliers popping up in our industrial park, wouldn’t be unrealistic for them to be making Acetylene.

hey, I’m all for an ‘industrial gas building’ bein plopped down as a new building to explore, with lots of different types of machines specifically for mixing and producing specialty gasses

… but yeah, someone has to make it first, and then the next question is ‘where do I get the materials to use this building from’

Well realistically even the most lean six sigma plant is going to have enough material to feed full scale industrial production for at least a day, if not a couple. Compared to a survivors needs, a fraction of that being on hand in the shipping dock should be enough. These shouldn’t be small buildings, in a dream CDDA I’d expect an industrial park to be a collection of map special scale warehouses and facilities. Even with the picked clean nature of a lot of areas, there should be more than enough for any reasonable survivors needs, if they’ve got the ability to deal with the undead presence.

An alternative would be proper warehouses and cargo yards, although it’d be really weird to see one of those away from a major rail station. if/when railroads finish getting into the game, I’d expect that to be a reliable source of all sorts of things, containers could hold anywhere from concrete to ipads. I’d also almost expect them to be a bandit and survivor paradise, with the relative ease of building fortifications from containers if the cranes are working still. Could be a fun bandit map special right there.

the railroad station building type DOES exist and spawns currently, its a pretty hefty sized area on the map too: 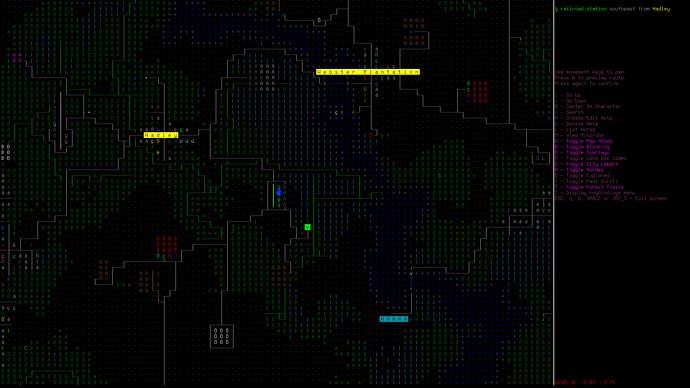 however, no rails, for obvious reasons.

That’s why I said finish getting into the game. Those all appear to be passenger terminals, not cargo terminals.

Maybe a contributor will undertake a mapping project, ala the dense urban buildings we got, but for industrial maps.

That means no, the whole point is for it to make sense in real world terms.

Even with the picked clean nature of a lot of areas

I would expect many of the outlying/rural locations to be picked clean within the first few years. But stuff like industrial parks/more urban locations would most likely be avoided like the plague by the vast majority of survivors. As there simpely is no good reason to go there. Yes there is loot in overabudence. But is that really worth risking the undead hords and other horrors if you largely already have what you need. So while a railwaystation or warehouse might have already bin cleared by some larger group and supsiquently picked clean by scavengers I would expect things as large as a industrial park and more urban area’s to be either completely untouched or only lightly looted at most even several years in.

for an industrial park, I’d expect it to not be picked clean specifically because its not ‘loot’ as a survivor would see it, (no food, no water, no means of creating shelter) but specialized loot that the layman wouldn’t be aiming for.

so! for production of calcium carbide, we’d need limestone (digging?) and coke (coal can be turned into coke as well as charcoal, in theory, all you need is a coke oven, which is just a sealed brick structure to burn the fuel with no oxygen source) and an arc furnace (which already exists)

lime and coke in a blast furnace produces calcium carbide, which can then be mixed with water in the gas machine to make acetylene gas

after a bit more research i now know it was a user by the name of ‘druidniam’ on reddit who was making these changes to the system to allow for production of oxyacetylene though this was about a year ago and I don’t see his name on the contributors list of GitHub (may have a different name there though, as most people do change names between services.) he claims that there’s a recipe for the gas machine so you can place it wherever you want though I cant find it in the files… another user said that he found the gas machine in a farm area (which I’m not sure about but hey)

I’ve also learned that ‘cavers’, or people who like to explore caves, generally tend to use acetylene lamps to explore, and acetylene lamps DO exist in the game (could be dismantled or unloaded for calcium carbide?) it would make sense to find them together in a hobbyist’s basement.

Still disagree about basements, a hobbiest is not going to be making every chemical and product related to their hobby from scratch, especially when they’re dangerous components. I’m pretty sure I’ve found acetylene in homes already, which is what I’d expect a caver to actually keep around. Just like how a car enthusiast might have some extra gas and hand tools around, but not a fractional distillation tower to make their own fuel

well its not out of the question in this case… the only way to ‘refill’ an acetylene torch/lantern is by sticking more calcium carbide in it… (usually in some pantyhose, easier to clean up apparently.) so if they owned the lamp, they’d own some refills, that’d be reasonable right?

You could assume that more dangerous chemicals might not be found in stores or just any old house. But places like random storage, labs, chemical facilities and schools labs would have such chemicals stocked.

‘dangerous in the wrong hands’ though.

theres plenty of dangerous under the wrong hands chemicals in peoples homes already, like bleach, when mixed with ammonia (urine) makes choramine gas

its less that the chemical itself is dangerous, its that when MIXED with something else it becomes dangerous, that places it on a lower tier (you can still buy both bleach and calcium carbide online unregulated, for example, its just difficult to find not-online) as compared to other higher tier chemical compounds like lab grade acids or solvents.

Cavers evidently do handle calcium carbide directly, as it turns out the safest way to handle small volumes of acetylene is to generate it in situ.
However I have to point out the volumes of calcium carbide a caver would have on hand would be absolutely useless for what I assume is the primary goal, fueling an acetylene torch.

I’m not seeing any other examples of anyone who would be handling it, which is what we need.

mmm… some alternatives… well its apparently used in some forms of fertilizer as well as steelmaking, so it could be found in large amounts on farms and in the steel mills? obviously in steel mills because the acetylene burns at a temperature high enough to melt steel, but also as a chemical reducing agent, lowering the overall sulfur content of steel.

cavers use low grade calcium carbide, because you can just take a rock of it to power the lamps they use… steel mills use high grade for their purposes, and farms use mid-grade.

for the farm application, they mix calcium carbide with nitrogen at 1000C to create calcium cyanimide, which releases ammonia when it comes into contact with water, so is plowed into fields… probably not used as much as normal fertilizers due to its production methods, though that’s my own speculation… I’m not a farmer.

according to studies though, calcium cyanimide has no detrimental effects on soil even after 100 years of use, (considering it was made and has been studied since the 1900’s) people may be using it more often nowadays due to its lack of impact on the enviroment.

steel mills would be the place to source large amounts of calcium carbide methinks.

I’m 100% certain that farms don’t have calcium carbide and a nitrogen reactor to make calcium cyanimide.

i mean, i wasn’t trying to imply they were creating it on site, and the fact that they’re using calcium cyanimide and not calcium carbide would mean its not found there… just thoughts written down as i’m researching it.