So, I recently acquired a staff that lets me have greater clairvoyance, or whatever the effect is on the wiki artifact tab that lets you see quite far through walls. I’ve been a pretty unstoppable machine (in melee) up until now, due to a solid unarmed build paired with a lucky Magiclysm find, and so in my hubris I entered a local Lab. I was hoping to use the staff to search out all the good loot and avoid hidden turrets.

As I got to the lab, I was a bit surprised to find that the only way in and out was an active elevator, and a large one at that. Odd, but not big deal.

It was only when I took the elevator down that I found that this was no normal lab. 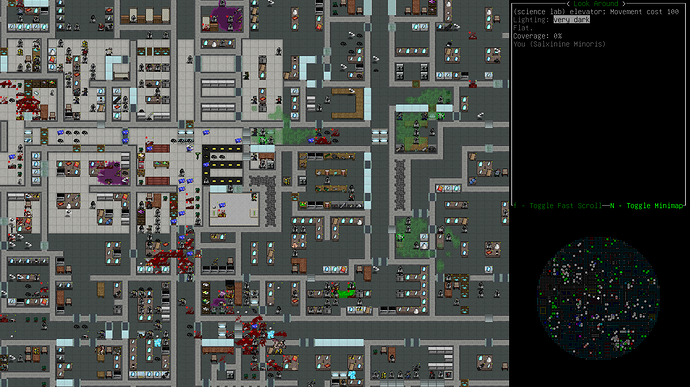 So, a few questions: what the HELL is all this? Is it worth slogging through (looking for rare loot like books and guns, not all these chemicals)? And finally… Any advice for working my way through C:DDA’s equivalent of a Megadungeon?

Big edit- apparently I’m an idiot and this is just how labs are now. Please disregard.

this is just how labs are now

And the old layout is completely scrapped? That sucks. Not hating the new one, I’d just prefer to have either appearing with some chance.

Nope. The older version still exists, but this one is more common.

i love how Bence’s profile picture is like “howdy boys, coming back from 8 months retirement”

Having just cleared out the entirety of this lab, these are what I noticed (spoilered so that people who don’t want to be, y’know, won’t be):

1. Mono-level; no going up and down stairs like a maze.

2. Overall ‘smaller’, but perhaps compact is more accurate; it’s a crapload of rooms crammed into a single big square area.

3. Perhaps I was grossly unlucky, but very little ‘rare’ loot - (good) books were few and far between, mostly only on scientists; CBMs were entirely absent, except on scientists (again); no Mutagen or Serum in the slightest; no ‘advanced’ tech loot to be found. The only notable thing I found was a Rotary Evapourator, which is a heavy-ass tool which has Concentration 1 (used for Serum crafting, iirc).

4. It has a section (labeled ‘Subway Station?’ on the map, as an S) that leads to other labs of similar size and design via rails; I’ve yet to plumb these others, and if the loot is anything like this one, I’ll probably give it a miss honestly.

5. Filled with lots of zombies - in fact, ONLY zombies (and a few modest security automata, like manhacks and the ‘experimental’ drone that looks like a spider). Zombie Scientists are in excess, with other normal (Zombie, Tough Zombie, Fat Zombie) ones mixed in, and the occasional Hazmat, Shocker, and the newly-terrifying Bio-Operator. Get ready to slog through well 100 Zombie Scientists, hope your scalpel (which I also didn’t find, damn me) is ready.

6. Chemicals. Tons of them. Every chemical you can think of, and then some - Hydrogen, Acrylamide, Lye (Powder and Liquid), Zinc/Zinc Powder, Formaldehyde, etc. ad infinitum. For a home crafter, it’s pretty nice, assuming you can stand the craft times (and already have the books to tell you how to use these things).

7. No ID-locked rooms. The only exception to this is the ‘Subway Station?’, which has an ID lock.

8. You can only enter or exit via a single elevator in the epicenter of the lab.

9. More dangerous than a normal lab, if you’re susceptible to swarming; the hallways are tight and it plays like a game of Spacehulk, where any intersection can become a grave. Guns are not advised unless they’re silenced or you have enough ammo to kill everything in the complex, because they WILL hear you.

now that’s an improvement… thanks for the info.

So, the new labs don’t even have an Armory? Or a barracks?

Thats right, those only spawn in the old styled labs.

tons of chemical, most of them are useless… unless somebody adds tons of recipes for making chemical weaponry

and now im on 0 luck because i’ve been playing for 2 session and didn’t find any labs on both session.

Tight as in they’re the difference between filigree and iron bars; behind every wall is a room immediately, rather than having some distance between rooms. This means that you are often right beside more zombies, and they also have easier ways to reach you.

Also, it’s good to know that the ‘Subway Station?’ tile can spawn in all labs, but what is the difference between a ‘Science’ and ‘Non-Science’ lab?

They can also spawn mutagen vaults and CBM operating theaters, but these aren’t guaranteed. So you should loot 2 or 3 of them to access the whole rewards.

Oh! That’s very helpful to know, thank you very much. Perhaps I’ll find my way back down there, knowing that…

I cleared one of these and got a truly insane number of CBMs from all the scientists. Unfortunately, I also got quickly trapped down there because the zombies destroyed the elevator controls.