Hello readers, with you (judging by the recent activity of the community) 1 of the 20 surviving commentators. As usual, I will not arrange too long an introduction, let’s go.

When my cyborg is able to devour a bunch of food, and convert calories into energy, which he uses to completely destroy zombies in the city. When we have literally portable teleporters in our bodies, nanorobots. they are able to mutate people’s bodies beyond recognition… We can’t jump further than 1 cell (-_-), I’m serious, my character can have 20 strength, break walls with his bare hands, throw zombies with the force of a cannon with a punch. but my lot of jump range is 1 tile? I am a master of parkour, and even so 1 tile will be the maximum? it seems to me that small changes are needed here.

I propose to add mutations from the line of arachnids/insects/ reptiles/ chimeras/cats to overcome large obstacles.

offers:
●You can add the capabilities of spiders similar to BN, in which they are able to create bridges from the path between houses, which allows you to explore the city much safer (until we add monsters that attack and see through Z levels), if it’s too difficult, or we don’t steal other people’s ideas, then it’s enough to add strong hind legs jumping spiders have a sharp jump, although the distances are not the biggest-it’s very fast. (Screenshot from BN where web bridge burn) 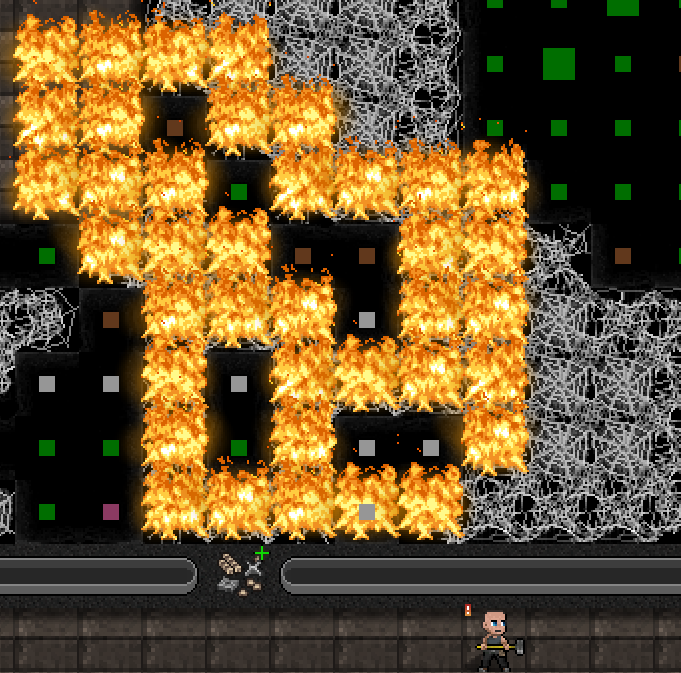 ●for insects, I suggest adding the grasshopper’s hind legs, strong legs, it’s difficult to wear pants with them, the thorns on them are uncomfortable, but we can jump for decent distances (if the wings are finally made capable of slowing down the fall, it will be possible to plan like locusts).
but such jumps waste a lot of energy, their strength drops a lot if the character is loaded.

●Everything is easier for lizards. lizards are good at climbing walls (I won’t bring up the idea here of letting some mutants like a spider climb buildings very much, but if I were talking about it I would recommend spiders and lizards), if I can’t jump on buildings like a locust or a spider, then can I just climb between them?

●Chimera is a combat mutant that with its paws and brute force is able to tear up all living things in its path. but why doesn’t she have strong legs? why can’t I jump into a crowd of monsters like a real monster, crushing everyone under me? it is possible to give chimeras strong opportunities to jump, but in return there is a chance to damage something under them (it is already difficult for chimeras to be on roofs because of their weight. I think it’s fair if the roof collapses under the player when trying to super jump), chimeras don’t need grace when we talk about parkour… but damn it, it should have been mentioned.

●with cats, everything is easier, this is an animal that can sneak, hide and … very quickly jump out on its victim, cats have pretty good hind legs, so it’s fashionable to give them the opportunity to jump through 2-3 tiles in 1 instant