Yo! It’s my first time interacting with this amazing community, so any pointers are very welcome.

This mod adds various monstergirls (or boys) as professions. I’ve also added a few add-on mutations to buff some underwhelming or negative mutations, they are only available via these professions.

Note that some of these are bound to be unbalanced since I have relatively little experience with the game.

Currently, there are 6 different monstergirl starts, each with a 4pt cost and an extra variation for mutant scenarios.

Hi, fellow degenerate.
Why “Animal Discord”?
Dryad and Satyr its probably opposite.
Sorry for my english.

First off, your English is great! ^.^

As for your question, I just wanted to add a negative trait to all of them without having to consider the balance implications for each one. Animal discord seemed like a good candidate since it really only affects the early game, which is also when these mutations are most helpful.

Lore wise, it could be explained by the animals recognising that something is subtly wrong about your character. After all, animals have lived in contact with humans as long as humans have existed. Kind of like an uncanny valley effect, I suppose.

gonna try it, and do you plan or making the monster girl/boy version of the other mutations? from what i see they arent too unbalanced on the long run, and i feel that they are just more like role playing addons, kinda nice.

I’d love to add more! It’s just that all my other ideas couldn’t be done with the mutations we’ve got available now. They’d either have key parts missing or end up too furry-like.

To fix that, I could add some extra mutations, but that’d cause its own problems.

Firstly, there wouldn’t be any sprites for these mutations. I might be able to make and add my own, but it’d take a while and I couldn’t guarantee their quality.

Then there’s also mod compatibility. If I start adding my own mutations into the existing mutation trees, it might conflict with some other mod that changes similar things. I could just take that risk or possibly try to find a workaround.

If I start adding my own mutations into the existing mutation trees, it might conflict with some other mod that changes similar things.

Why would it conflict? Unless another mod add a mutation whith the exact same id there’s not going to be any conflict

Si far im liking it, its a nice starting boos for just 4 points,have you thought of making a more practical version of the professions?, something like without the mutations that give you stats but with the mutations like gives you abilities, like a spider version that lets you make webs, or like the cow version that lets you eat grass and be tankier, kinda being like bodyguards lore-wise

Why would it conflict?

If I start inserting additional mutations into existing mutation chains, then I think it might conflict with other mods doing the same. An unlikely scenario, but it could happen. I could also be entirely wrong since I’m not that familiar with the inner workings of mutations.

have you thought of making a more practical version of the professions?, something like without the mutations that give you stats but with the mutations like gives you abilities

I have considered active mutations if that’s what you mean. It’s just that most of them are behind thresholds, which I’d rather avoid.

Hmm, perhaps I should be more specific.

Say I wanted to add mutation X between A and B so it’d look like A -> X -> B
To do that, I’d have to override the "changes_to" value of A and "prereqs" for B.
Now if some other mod wanted to change those same values, there could be a bit of trouble.

At least that’s how I see it. Might be some nuance I’m missing since I haven’t actually put theory into practice.

Ah right, yes that could be a problem. To avoid that you could make your own mutation lines that don’t alter vanilla ones

knowing what to do is the easiest part, now the thing is to have time and code it xD

To those interested, I tried my hand at making a drider mutation sprite. I think it looks usable, at least.
I’ll be implementing it after 0.E gets released and some nice mutation related PRs get merged. 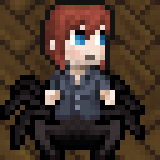 Just remember to add some balance to your professions too, i mean for example, the Scylla,Satyr ones get totally wrecked in the defense gear from the waist down, and IMO the satyr bonus isnt that great, at least not in regards to lose good armor on the leg/feet